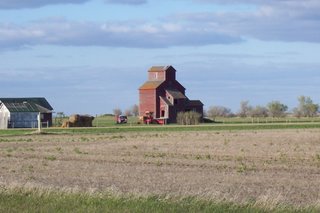 I have been in Saskatchewan for 5 days now and the landscape continues to amaze me. The cities are similar to most cities full of life and stores and people and cars, but outside the countryside is so unique. "Land of Living Skies' is the logo on license plates and it is true. The sky dominates the landscape as the earthscape is so flat. 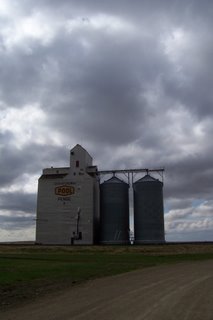 With trepidation, I took my daughter's car on my own to explore. I am not good at directions or navigation and it still amazes me that I negotiated roads, cloverleafs and intersections without ending up in Winnipeg!

I stopped in a tiny rural town of Pense between Moose Jaw and Regina and had my first encounter with a grain elevator. These elevators are rapidly becoming a thing of the past as farming life is disappearing so the need for them dwindles too. Some are amazing structures with ancient timbers, others well kept and modern looking. The older ones appeal most as they have character. They pull me to explore them and photograph them and draw them. And I will, once time permits. For now, a photograph will have to do til I have enough time alone to sketch. The girls get fidgety if I linger too long and get out my sketchbook. 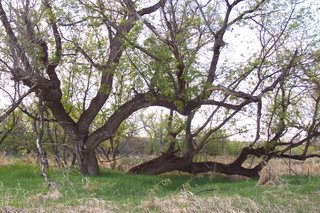 Tonight exploration was rural too - to Buffalo Pound Park and on the way found a small grain elevator abandoned along with other outbuildings in the middle of nowhere. We didn't get too far into the park or see the buffalo as light was fading and to be honest the atmosphere as we wandered down the path was eerie with dozens of half dead trees flanking us, rahter like a scene out of the enchanted forest. There were sightings of wildlife as a pair of whitetailed deer popped up in a field and a large flock of pelicans flew overhead, startling me, looking for all the world like some prehistoric gliders. I haven't seen pelicans fly high before and the sound of their wings against the air added to the feeling of creepiness. I know, I have a vivid imagination...

More adventures tomorrow as I borrow the car again and head towards Regina - or perhaps I'll go discover dinosaurs in the opposite direction!
No comments:

I work for a non profit organization. Unless you have operated in that environment and become used to it, when viewed from outside eyes, it is unusual. Volunteers are the norm, paid staff the exceptions. And meetings tend to be held outside regular working hours to accomodate the volunteers. So Ii worked Friday night, allSaturday, all today and will finalize my meetings on Monday.

No, I don't get paid for overtime. Yes, I get time off in lieu, but rarely take it. Its one of the 'catch 22' situations. You have all this extra time building up but more work accumulates while you're gone so you never get around to taking the time off because more work accumulates in your time away....etc., etc.

Its a life I know and know well. Elements of it I hate and other parts I love. Stress is a high factor but offset with working with good hearted people who are in the organizaiton for the long term, so each meeting becomes like a big family reunion.

There are wars and words, successes and failures and disagreements, but in the end we all come together and make things work out as a group. And now, a little recreation - dinner at the casino then I'll see how my luck is holding up.
1 comment: