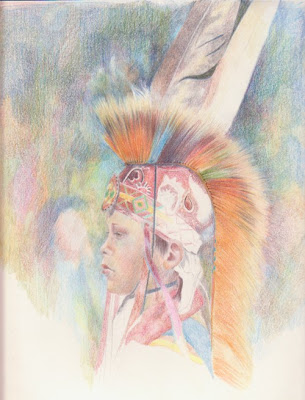 I never understand how racism can exist in the world, as I find other cultures fascinating, especially the rituals and traditions that go with important ceremonies. How can others object to this, unless they find it a threat to their own existance?

Yes, there are individuals in all cultures who make good and bad decisions about how they should lead their lives, but why do some people select whole ethnic groups to project their fears onto without ever looking into their own world first.

I started a coloured pencil drawing today of a young native boy, dressed in ceremonial headdress. I love the light and the look of anticipation on the boy's face. How long had he practiced for this monent? What was going through his mind? Did he know his dance was an echo from hundreds of years ago?

The drawing is 9 x 12 on Canson paper and I'll update it as it progresses. There is about 8 hours of work in the current image.
2 comments: 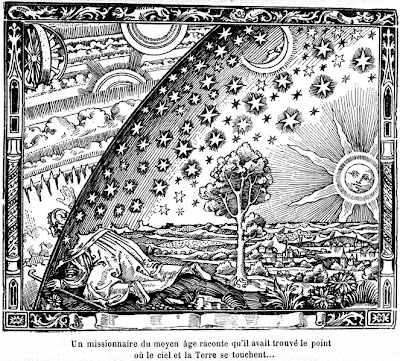 The Flammarion Woodcut is an enigmatic woodcut by an unknown artist. It is referred to as the Flammarion Woodcut because its first documented appearance is in page 163 of Camille Flammarion's L'atmosphère: météorologie populaire (Paris, 1888), a work on meteorology for a general audience. The woodcut depicts a man peering through the Earth's atmosphere as if it were a curtain to look at the inner workings of the universe.

The caption translates to "A medieval missionary tells that he has found the point where heaven [the sense here is 'sky'] and Earth meet...".

This work is related with the mistaken (but even today widespread) notion that medieval scholars believed in a flat earth. Today professional medievalists and historians of science agree that this "medieval flat earth" was a nineteenth-century fabrication, and that the few verifiable "flat earthers" were the exception.

Years ago I had a friend who was an astrologist. On my birthday one year she produced a detailed astrological chart that really meant nothing to me besides an elaborate set of lines, dots and words, but to her it mapped out my past, present and future.

While I have a degree of skepticism about the whole concept, there is also a deep rooted interest in astrology as well and when I talk to individuals and find out more about them, I see how some traits in specific astrological signs fit in. Now is this coincidence or reality? Do we see what we want to see and make it our own?

Being born under the astrological sign of Pisces, according to some sites, I have a variety of traits that I am well aware of and that follow through in my belief of who or what I am. There are as many astrological predictions and explanations as you wish to examine, some a lot more respectable than others. My astrological sign of the two fishes, swimming in opposite directions, but joined by a cord, was a symbol that I used in my symbolic self portrait that's still being completed. So what am I in astrological terms?

'Well, what are you?" said the Pigeon. "I can see you're trying to invent something!" "I-I'm a little girl," said Alice, rather doubtfully.

She found herself at last in a beautiful garden, among the bright flower-beds and the cool fountains.

Pisceans tend to withdraw into a dream world where their qualities can bring mental satisfaction and sometimes, fame and financial reward for they are extremely gifted artistically. They are also versatile and intuitive, have quick understanding, observe and listen well, and are receptive to new ideas and atmospheres. All these factors can combine to produce remarkable creativity in literature, music and art. They may count among their gifts mediumistic qualities which can give them a feeling that their best work comes from outside themselves, "Whispered beyond the misted curtains, screening this world from that." Even when they cannot express themselves creatively they have a greater than average instinct for, and love of, beauty in art and nature, a catlike appreciation of luxury and pleasure, and a yearning for new sensations and travel to remote, exotic places.

And of course there are horoscopes for artists... and what else could a Piscean be?
Art World Astrology
3 comments: 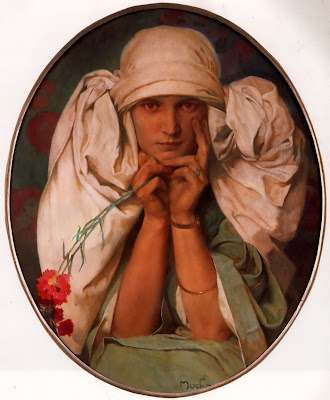 Last night I had a board meeting which went on quite late. Board meetings for a non profit organization are a challenge sometimes. They provide people with an opportunity to shine or fall flat. In the organization I work for, all board members are volunteers which brings its own set of unique concerns. However, I look at volunteers as simply staff members who aren't paid and I make the same demands on them as I would for a paid staff person.

I expect responsibility, strategic thinking and the ability to follow through on work. Sometimes I get that, sometimes not. It seems to be the nature of the beast when volunteer groups come together. It s such an eclectic group, mismatched, unsure of their role sometimes, too cocky other times. And there I am, the staff person, torn between two worlds and wondering which way to turn, hoping one is easier than the other.

Perhaps it is time to change. Maybe doors that are opening now for me artistically and in other areas which are casting shadows on some parts of my life and making it less appealing.Plans that I put in place are coming together and it may be time to reassess and change focus to be able to ensure that changes become something for the good, not just for the sake of change.
No comments: 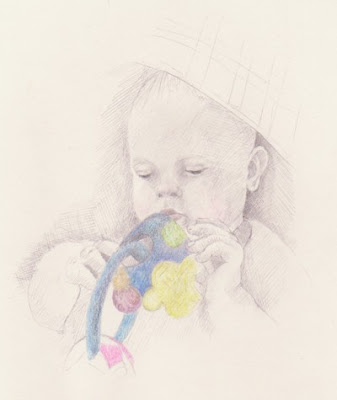 Kiora's Toy
Graphite & coloured pencil
copyright Jeanette Jobson 2007
My granddaughter is nearly six months old and at a stage of actively discovering her world. The fascination shown by examining a toy's structure, shape and colour reminds me of how an artists views an object when drawing.

Drawing is an act of discovery which brings back some of the long forgotten senses that are so important when examining the world for the first time. There may not be the same sense of puzzlement over an object's purpose or wondering what a colour is, but drawing brings its own sense of amazement as object unfolds on a blank sheet of paper.
2 comments: