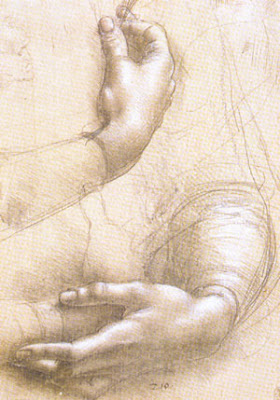 I'm in a bit of a slump right now in terms of drawing. I have things I fiddle with, but nothing is coming out as I want and my want isn't really there. I know everyone goes through periods like this and I know it will pass. I feel as if I should be creating new pieces or finishing others, but its just not there right now. I'm tackling some other creative things for a day or two til the drawing hand revives.

I bought some sterling silver wire for some of the jewellery that I make and I want to experiment with silverpoint drawing, one of the oldest drawing media, predating the graphite pencil. Silverpoint drawing is done with a sharpened silver wire on a gessoed support. Because silver reacts, the silver-gray drawing then tarnishes to a darker reddish brown. I need to create a treated surface to draw on, either gesso, or if I can't find that, then gouache or perhaps at a pinch, latex on a firm paper. I'll test it using some of this silver wire in a mechanical pencil holder. There are specific silverpoint supplies that can be purchased, but I won't invest money until I know that I like it or it performs as I want it to.

Here are some links to silverpoint for those interesting in trying their hand.

My other creative alternative is knitting, which I haven't done for a long time,, even though I have cupboards of a storage room stuffed with balls of yarn or all types. I agreed to teach a few beginners to knit in March, and need to reacquaint myself with the movement and feel of yarn and needles. I have been a knitter since grade school, just likely less enthusiastic in those school days when we had to knit squares for blankets for less developed countries.

I moved into a stage of constant knitting for many years, only to have it lapse when drawing took over most of my time. I began a Master Knitter course in the late 1990s, however part way through it seemed that the endless squares were more like tension swatches than a verification of my skills, so I didn't complete it. The concept was to provide, in several phases (3 or 4 I believe) of increasing difficulty, proof of your skills through a variety of squares of work that eventually could be sewn together to make a bedspread sized blanket. I have about half the course completed and still sitting in that storage room cupboard, waiting. I guess I should sew the squares already made into something instead of letting them languish.

I also believe that acrylic yarns should be abolished. Yes, I know they serve a purpose in this wash and dry society, but the feel of real wool, alpaca, cashmere or soft cotton or linen can make or break your interest in a knitting project. And, if I'm going to invest time and money in creating a knitted piece, then it needs to be unique, both in pattern and materials.

For those interested and not close enough for me to show them the techniques, try a couple of these links to get your started on a new art form. 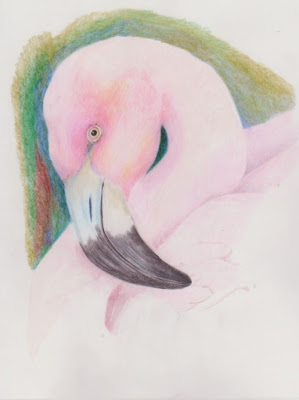 I liked the shapes of this elegant bird and wanted to try it in colour. However I'm not very happy with the initial stages. I'm hoping its just in its ugly stage and will pass by soon.

I thought I'd try the drafting film again and soon remembered just how few layers you can achieve on this surface. However, it is deliciously smooth and buttery to draw on. I'm using Derwent Coloursoft pencils and haven't tried them on the film til now. Perhaps I'm just out of practice on this support, but I don't like the initial efforts. This may be one of those to add to the 'mistakes' drawer.

The background start is not good and the colours in the feathers is far to candy pink. Yes, I think this one will be trashed and another started. I know I can erase on drafting film, but have found it just doesn't have quite the same smooth surface after erasing, so I avoid it when possible. Sometimes its useful to just look at things on the computer screen and reality appears more clearly than when it is in front of you.
6 comments: 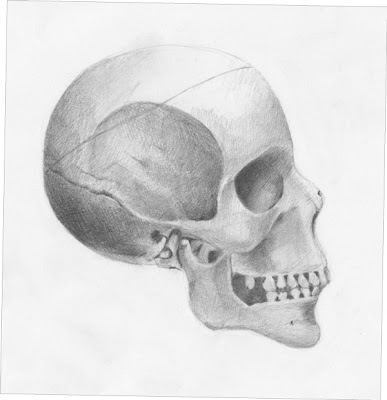 Skull Study I
Graphite 8 x 10 Canson sketch pad
copyright Jeanette Jobson
I was a little taken aback recently by hearing a person who was drawing a figure say that they didn't know where the ribs were on the body. This was echoed by another couple of people around the room and I was inwardly gasping in amazement. I guess I figure that everyone who sets out to draw the human form in whatever format, from full figure to portrait, knows at least some basic anatomy. I guess I was wrong.

Anatomy was absorbed by me early on in my art life through studying the figure, attending life classes and having bone structure and muscle explained to me in sculpture classes. Then I got into anatomy in full detail when I trained as a chartered herbalist. For the best part of a year, I studied and memorized parts of the human body, how they performed, how they broke down. Muscles, bones and organs became a way of life in a depth I never would have imagined and I found it fascinating. Yeah, I was the geek who fell asleep with the heavy copy of Gray's Anatomy (no, not the television series) on my nose. Now Gray's Anatomy is also available online, even though I have to say that I prefer a real book in my hands, especially one so full of detail and description.

So to hear people who were drawing the figure say they weren't at least vaguely familiar with what I would call school grade anatomy was surprising to me. This put me on a quest to remedy that, at least for my drawing class participants. I want to find a skeleton or at the very least, a skull for them to draw. There are lots of images and I have anatomy books full of bones, but its not the same as the real thing. But its not as easy or as economical as you would imagine to come up with some bones on this island or even in Canada for that matter.

I've browsed all over the place and found a few suppliers where prices range from the thousands for real human skulls or skeletons, down to very reasonable prices for realistic looking copies, suitable for educational use. Just finding the right price and one who will ship to Canada on my terms is the challenge.

So if anyone has a skeleton in their closet, and want to find a home for it, let me know. It will be put to good artistic use.

Meanwhile, there are a number of artist anatomy sites online that are great for reference material and learning resources.

Anatomy for Artists: The Human Form Revealed: The Shoulder 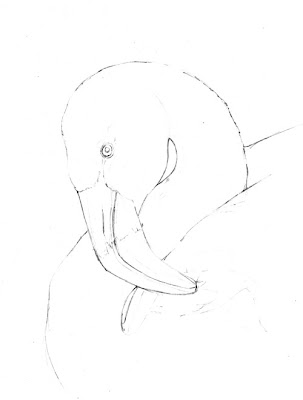 I've never drawn birds much - hardly at all in fact, but I find myself drawing them off and on for the last couple of weeks. Not detailed images but contour drawings, in the hopes that one will inspire me sufficiently to continue one with it.

I loved the shape of this flamingo, all curves and smooth lines. This may be 'the one'. This is a sketch is put together at lunch time on computer paper and a horrible office pencil. Note to self: Put a decent mechanical pencil in your bag!

Most waterfowl have long graceful necks - and usually nasty dispositions. Perhaps its all the sifting around in the bottom of the lake that does it. However, as I've never been in really close proximity to a flamingo, except in a nature park, I can't really comment on what their personalities are like. They are beautifully shaped and coloured birds and I hope to capture this one on paper.

The medium will likely be coloured pencil and perhaps drafting film. I haven't used film a lot, but it really is lovely to work with and I want to give my new hellishlyexpensiveduty/brokeragefeedtodeath Derwent Coloursofts a good trial run. They are beautifully soft and go on very smoothly. Note to Canadians: Never use FedEx for delivery from the USA to Canada if at all possible. They are no quicker at getting items across the border and their 'brokerage fee' is outrageous. It negated any savings I was anticipating in buying my full set of Derwents from Blicks. Plus duty on top,which I don't mind paying. A fee to put something in a truck and warehouse it, yes I do object. $13 in duty and taxes, $28 in brokerage fees. Hmph. I paid almost as much in fees as I paid for the entire order. Life on an island. Some days...
2 comments: