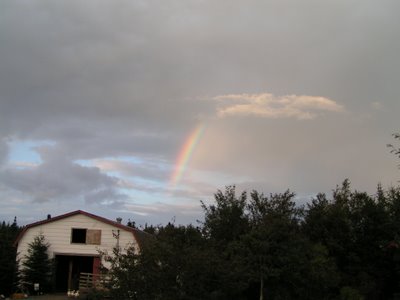 There was a partial rainbow over the barn today, that wonderful illusion of colour and form. Like most illusions it is shortlived, but I did manage to photograph it.

I have been trying to find time today to do some drawing and have made the beginnings of a horse portrait. It is of Lady, the horse that was sold this summer and it is on a larger scale. I am determinedn to get out of the tiny sketch book rut that I have fallen into. I needed the freedom of using my entire arm in drawing. So the draft of the master drawing for Lady is on 18 x 24 paper. I have some large sheets of Stonehenge that I bought in Toronto last year that I may transfer the image to or perhaps onto watercolour paper. However that would mean a trip to the store as I don't have any watercolour paper larger than 16 x 20 right now.

The daylight goes so fast today that it is dark before I realize it and I haven't taken a photo of the drawing so far. Tomorrow. I was busy make knishes today. They didn't turn out to be anything like the ones I had seen, but they tasted good and that's all that counts. 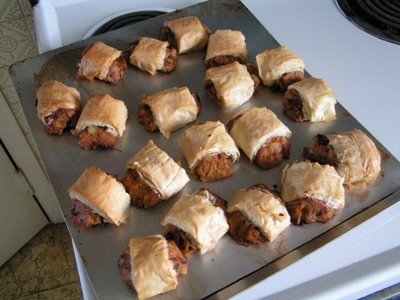 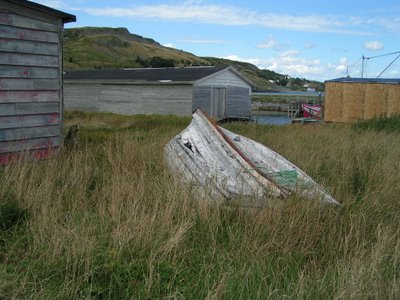 Sundown tonight marks the start of Rosh Hashannah, the start of the Jewish New Year. Whether Jewish, Muslim, Buddist, Catholic, or atheist, it doesn't matter to me, as I'm not one to participate in religion for a variety of reasons. As a base, all religions hold to similar beliefs of faith, trust, love and betterment of the individual through betterment of others. What separates most religions are the rituals around holidays, either in religious ceremony or in the traditions of eating specific foods, but even then there are similarities of ritual. Family, friends, food, ceremony.

Because it is the Jewish New Year, and because I'm always curious, I learned a new word today. Knish. It is one of the foods associated with Rosh Hashannah and I'm dying to make some as they sound fabulous. No, I don't want to adopt a religion, but I do want to explore and taste the foods that surround the different holidays and cultures of the world. So if I can I'll be trying my hand at making knishes this weekend.

According to Wikipedia a knish is:

an eastern-European Jewish or Yiddish snack food. It is a dumpling covered with a dough shell that is either baked or fried.

Like many Jewish foods popular in North America, knishes were created by eastern European Jews who wanted to add some variety to their humdrum diets. By wrapping dough around kasha (buckwheat) or potatoes they made something new and interesting out of rather mundane ingredients. All inexpensive items, they were staples of the peasant diets. As is common across the world, these inexpensive items are what became traditional foods full of wonderful memories for future generations.

Shona Tova to all those who celebrate the holiday.

May your best day of last year be the worst of your next.

Venturing out into the world 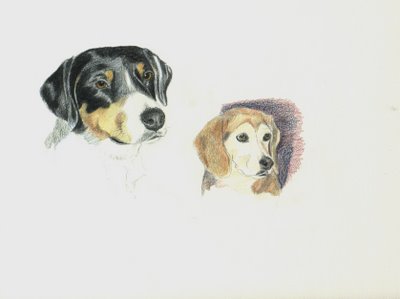 My blog has been accepted into the Blogburst network. Pluck's BlogBurst network is an opt-in aggregation and syndication service that brings high-quality, topical blogs together with high-traffic web sites. With BlogBurst, bloggers gain visibility, audience reach and traffic through placement on major online publishers and media destinations in real time.

This is another step towards revitalizing my career as an artist once more. Getting my name out into the world, as well as my work does take time and a lot of hard work. Its a full time job in its own right to make the rounds of stores, vets, shelters, shows, breeders, etc etc, to place a seed of thought about portraits in the target groups. Today I created a full page list of people and avenues that I should pursue to make contacts. I need to take a week off just to do that!

Connections in print and in person are time consuming and expensive in some ways, but I'm hoping they will pay off.

Today I approved the proofs of the limited edition prints that I am producing and they should be ready in the next few days. Then time for more marketing. Its also time for developing a website to promote portraits and prints. Time, time, time...
3 comments: 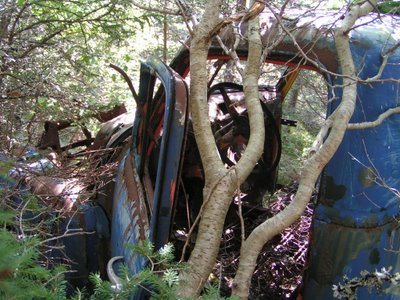 This image was taken deep in the woods along a rough trail behind my house. It is an abandoned truck frame left in the depth of the trees years ago and now nature is reclaiming it as her own. The blue paint was startling against the greens and browns of the trees. It must have been there for some time and you have to climb over stumps and wrestle with trees to get close to it. I never understand why people dump vehicles in the woods, they are an eyesore most of the time, but nature softens the blow a little with vines and leaves and branches and makes nests for small animals. Perhaps it evens out the harm to some degree.

I am waiting with bated breath for some final proofs from the printer on a variety of archival art papers that he has so that I can give the go ahead to print a limited edition series of the negative space drawing that I completed for Mike Sibley's class.

It pushed me outside my comfort zone but that push worked and helped me overcome my fear/dislike of complex backgrounds. By breaking them down into manageable pieces, they become almost soothing to complete.

The prints are my first venture into this side of art and I will consider carefully where to market them. They are a change from my usual animal and people drawings and I plan another few similar drawings before winter takes the depth out of the grasses and weeds. Then again, the starkness of crisp grasses and snow could be interesting also.

Living in the moment

By nature I am not a trusting person, yet on the other hand I am too trusting, almost naievly believing that people I meet are genuine. Unfortunately, I still am left in an amazed state when people let me down for reasons unknown. I'm sure we are all like that to some degree. Some react more strongly than others. I guess I'm somewhere in the middle, and veer to the extreme from time to time.

Memory triggers more memory and even now I can clearly recall words or actions from years, tens of years ago and they come back as fresh as if it was minutes ago. I can recall every thought, word, movement, every expression passing over a face with clarity. That can have good aspects and quite bad ones too. So it pays for me not to think too hard or recall too deeply.

Maybe living in the moment does have its benefits, but I always cast an eye to the past and one to the future and sometimes miss the present.
No comments: 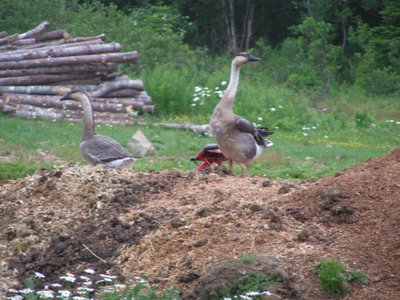 It is their goal. The top of a manure pile outside the back of the barn. The geese make a beeline for it most days and whoever gets to the top wins it seems. Its a good vantage point and the 'maturing' pile gives off warmth and provides a great place to hunt bugs for the lowly chickens who are relegated to the bottom of the pile.

It has been a whirlwind weekend and I haven't stopped for a moment to catch my breath. I have rushed from supply stores to pet stores to promotion events and feel as if I'm making a dent in my goal. What is my goal? I want to get back into the business of making portraits - both people and animals. After a 'break' in art for a long time, I was triggered by a number of things to get back into again.

I have forgotten however how hectic the pace can be in moving towards it and in achieving the goal - and I am not at the age when it came more easily and recovery from effort easier too. But its slowly coming together.

Yesterday I did a four hour stint at Pooches in the Park. It was a beautiful early autumn day. I set up a table in Bowring Park and displayed portraits in pencil, pen and ink sketches, watercolour and coloured pencil as well as a portfolio of previous work, brochures and plenty of conversation. People seemed genuinely interested and I believe that some commissions will be done because of it and due to the fact that I will give a percentage of my fee to Beagle Paws, the charity sponsoring the event.

Between conversations with people and dogs, I drew - what else but a beagle? I find it a little difficult drawing with many people stopping to comment and having to fight wasps who wander in to see as well, but I did get some preliminary layers down and will continue with it when I can. I must create a couple of horse portraits and some watercolour portraits as well to use as show pieces as I'm lacking in those right now. I'll reach my goal. It just takes time.