The day after the month before 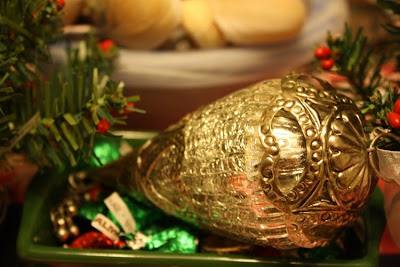 There are some things about Christmas that I love and hate.  I feel it is very over rated and filled with fleeting sentiments which descend in December for a few days, then are gone again, like a cloud across the sun.  Maybe its the commercial aspect of the season that turns it into stress or the forced jollity and social gatherings that would never take place otherwise turn it from pleasant into unpleasant.

Before I'm considered a complete Scrooge, I have to state that there are good aspects of the season too. The ancient winter solstice gives people time to relax a little and reflect on the year that's past and what is to come in the future. Gatherings of families are rarer, as people are scatted to the wind these days in all corners or the world and Christmas is more often spent on the telephone or on some computer video messaging program rather than in person.

The lights that accompany the season brighten dark winter nights and roads and gardens look deserted and so dark again when they are taken down in early January.

My season has been quiet as most years are, but more so this year as I scaled back Christmas.  And the thing that I noticed most of all is that I enjoyed the scaleback.  No big indoor tree, no masses of decorations all over the house, no huge turkey with a month's worth of leftovers, no fruitcake.  Oh all the traditional food was there, but just not in quantities enough to feed an army.  For once, I don't feel as if I've eaten too much at any point.  Chocolate consumption has been minimal and I have a bottle of Madeira that hasn't even been cracked open yet.

I went to a Christmas party on Christmas Eve and people watched as I sipped my wine.  I watched and thought how child-like adults become at Christmas, with behaviours that we would not tolerate in children.  Alcohol loosens inhibitions and tongues in adults.  Children simply are born without any social restraints and have no need to imbibe to return to any previous form of behaviour.

I do not deny people their pleasure or celebration of a season that may or may not have any Christian religious significance, however, I think if I could let it pass by without my participation, I would not miss it much.  However, it is rather difficult to do that, as the world pulls you along with it into the season, whether you go willingly or unwillingly.
4 comments:

The last couple of days have been very windy and rainy and the wind direction churned the sea.  Even though I live about 5 minutes drive from the ocean, I could hear it pounding against the cliffs when I went outside.  Lying it bed I could feel it. It became a subtle but rhythmic thud, almost like a heart beat, vibrating through the land.

Early this morning I went to the sea, both in Flatrock and Torbay, to take some photos.  The ocean had calmed a lot since yesterday but was still pretty rough and the power of the waves hitting the land was still very evident. 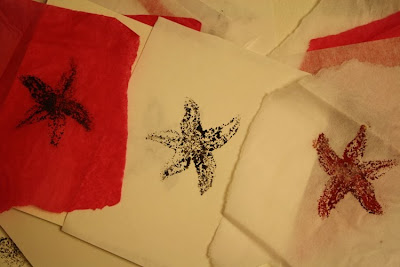 The beach in Middle Cove was deserted.  I was probably the only one foolish enough to be out at that hour in the cold to gaze at the sea.  There were a few casualties of the storm:  a young seagull who misjudged waves and wind and a small sea star, ripped from its ocean bed and placed on the beach by the surf.  Of course the find of a sea star brought only one thing to mind - gyotaku printing!  I brought the little Christmas star home and am busily making lots of prints with it.  Some are on printing paper, some on tissue, some on cards and some on watercolour paper, ready for washes of colour to be added.

The little sea star will be washed, dried and popped into the freezer for another printing session after Christmas.  More images from the prints will be shared over on Watermarks tomorrow. 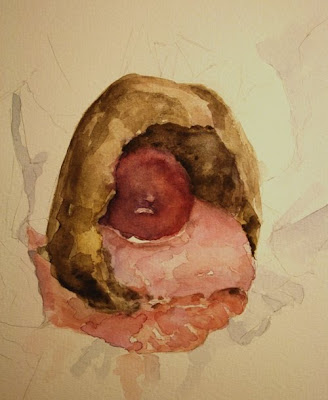 With shopping and cleaning and winding down a bit (read napping) I haven't spent a lot of time painting or drawing outside of some commissions, but have lots of ideas floating around in my head that I hope to put onto paper soon.

One of these is a drawing or painting of the image above.  This is a Cherry Blossom and they bring with it memories of my father and childhood.  My father was diabetic and would at times would go into insulin reactions and need something sweet quickly to counteract the effects.  There were always a handful of these chocolate cherries on top of the fridge and we knew as children they we were never allowed to touch them.  And we didn't. 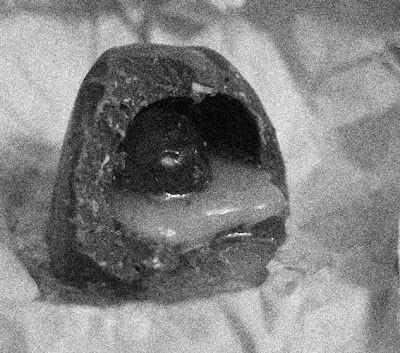 While I was picking up something at the drugstore today, I saw a line of these along with many other kinds of chocolate bars by the checkout.  On impulse I picked one up and decided it would make an interesting drawing or painting.  I got it home and took it out of its little box and unwrapped it.  It seems smaller than I remember or perhaps as a child it just seemed larger then.

To reveal the cherry and gooey filling, it had to be bitten into.  The chocolate shell is thick and boy it sure is sweet.  Oh the things I do for art... however, I did break into it and did a quick watercolour sketch as well as taking some photos, so now I need to decide on a medium and move ahead.

And no, I didn't eat the rest of the Cherry Blossom.  Its still sitting in its sticky splendour, waiting for me to succumb, find a willing volunteer or dump it.
7 comments: 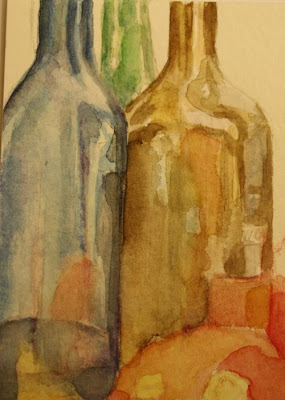 While in the midst of Christmas preparations, time for art becomes a bit scarcer, but I usually manage to fit something in most days, even if i don't get to blog about it - or even if its fit to blog about!

I was rummaging around in the cold room, sorting out what alcoholic delights were there and thought a little sketch of some of the bottles with the light shining through them would make an interesting compositions.  this is a tiny piece 2.5 x 3.5 and may well translate into a large painting, but that may have to wait a little longer.

The intricasies of painting glass intrigue me.  The subtle colour and value changes as well as hard and soft edges that give glass its unique appearance are all very acheiveable if you take your time and look at it like a puzzle.  Putting one piece in at a time and suddenly you have glass!
5 comments: 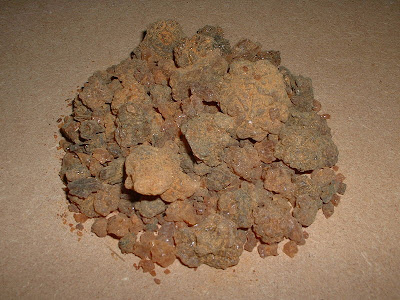 As some of the readers of this blog know, I have several facets to me besides that of an artist.  One of those facets is that I am a herbalist.  This means that I have trained in herbalism which provides me with knowledge of medicinal herbs, how to prepare them and their effect on the body and various disorders.

My herbal side has slipped a bit in recent years as art has taken over, but I still strongly believe in the power of herbs to treat illness and the holistic approach to traditional medicine that western medicine often lacks.  I also still grow and use medicinal herbs in preference to most over the counter medicines. 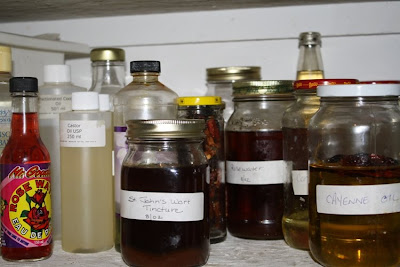 While looking for something entirely different today, I rearranged some shelves and found some myrhh, yes one of the classic Christmas gifts supposed brought to Jesus by the three wise men.

Myrhh is an important resin the herbal world. Myrhh is a resin which is produced by a small, spiny tree or shrub with knotted branches; a member of the same Burseraceae botanical plant family as Frankincense (Boswellia carteri), myrrh and frankincense essential oils have similar therapeutic properties in aromatherapy use. 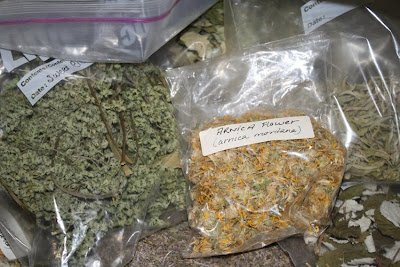 The resin of myrrh is naturally found in the cracks of the tree, which sets in brown-red lumps. According to legend, goats used to rub against the trees and the shepherds who tended them collected the resin which had stuck to the goats' hair; today, the collection of the resin is from man made cuts in the tree or by cultivation of trees.

In Ancient Rome myrrh was priced at five times as much as frankincense Roman funerals to mask the smell emanating from charring corpses. It was said that the Roman Emperor Nero burned a year's worth of myrrh at the funeral of his wife, Poppaea. Pliny the Elder refers to myrrh as being one of the ingredients of perfumes, and specifically the "Royal Perfume" of the Parthians. He also says myrrh was used to fumigate wine jars before bottling. Archeologists have found at least two ostraca from Malkata (from New Kingdom Egypt, ca. 1390 to 1350 B.C.) that were lined with a shiny black or dark brown deposit that analysis showed to be chemically closest to myrrh. The Romans were known to use myrrh as a premier additive to wine, though the latter was far more popular.

Myrrh essential oil is ant-inflammatory, a tonic, a stimulant, antiseptic, astringent, carminative, sedative and anti-microbial. It is used in skin care to treat Athlete's foot, eczema, wrinkles, cracked skin and wounds; myrrh oil is also used to help arthritis, asthma, bronchitis, gum infections, coughs and sore throats. It is also helpful in the treatment of diarrhea and colds.

Myrrh can also be found in mouthwashes and toothpaste and is used in dentistry. It is popular for use in perfumes, cosmetics and soaps and is found as a flavoring agent in drinks and food.