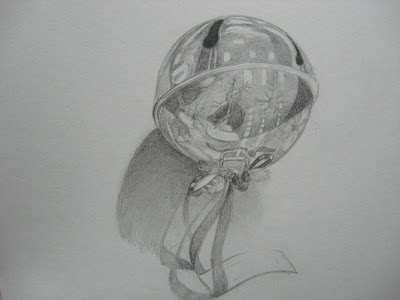 I would rather teach drawing that my pupils may learn to love nature, than teach the looking at nature that they may learn to draw. (John Ruskin)

I was teaching a class and needed something reflective for them to draw so picked up this silver bell. I love reflections and how they distort their surroundings. While class was drawing, I sketched the bell and if you look carefully you can see some of us in the drawing.

Tonight I'm finalizing my pieces for tomorrow's show. I'm actually on top of things before a show for a change! All I need to do is pack everything into my portfolio and drop it off in the morning. I promised to do my volunteer stint tomorrow at the show. I firmly believe in giving back in terms of volunteer time. Volunteerism is dying - not slowly, but quickly and many I speak to, cannot understand why I give my time without any money attached to it. Its just inbuilt at this point I guess. And you get back in many other ways that can't be reflected in financial terms.
1 comment: 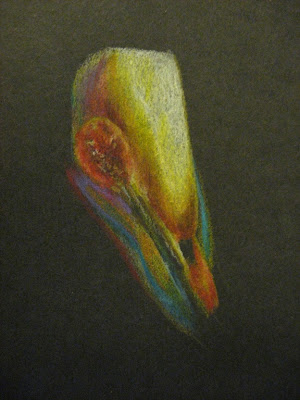 Burning match study
Coloured pencil on black mi-tientes paper
copyright Jeanette Jobson
I saw this little reference and realized that I'd never tried drawing flames before and there was no time like the present. There are successes and weak points in it, but I enjoyed working on it and rather like the overall effect, even if cropped a bit.

Its a weekend and they don't seem to exist much for me anymore. My schedule on the weekend - well every day - seems to get busier and busier. As long as I don't think too far ahead, it works out fine.

I spend Saturdays prepping for drawing classes on Sundays and during the week and making sure I have lessons in place and demos in hand. This weekend I also have an exhibition that I'm putting some pieces into and I'll have to spend some time 'show sitting' as a member of the board. I don't mind that, in fact, its rather fun to people watch and get a chance to really look at the drawings and paintings that people have produced. The only spanner in the works is that its supposed to snow on Sunday. The first snow of the year so it could make driving a bit of an adventure. We'll wait and see.

I do have a commission for a set of nine drawings in coloured pencil, depicting the nine emotions of yoga. I've started on the first one and its a little eery with a eyeless face looking back at me, but with a calm expression. I'll work my way through the emotions and use a different colour for each to try to tie them into the emotion being drawn.

I've also picked up another private lesson to teach which I'm fitting in between a strategic planning meeting and life. I'm considering offering some additional private lessons to see how much demand there is for it locally. If there is enough demand and commissions arrive, I may reach the point where I'l have to make some decisions about the levels of my regular job and my art job and how they overlap. But that's the future. Right now I'm just drawing and wishing for more hours in my day.
2 comments: 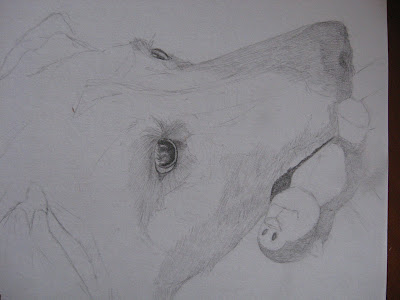 I started this sketch of my daughter's dog Jessie while I was in Saskatchewan. Jessie wants to play. Always. 24/7. Her favourite game is 'pullthistoyoutofmymouthandmakemegrowl'. This becomes a dangerous game when its a little toy, as fingers get mistaken for toys.

Jessie can destroy any dog toy that's ever been invented within 30 minutes. Huge rawhide dog bones, indestructable dog pull toys, ropes, 'guaranteed not to break' toys, anything. She methodically dissects them like a little boy dismantles a clock to see how it works.

The room is littered with dog toy corpses soon after she gets one. Christmas consists of Jessie sitting whining next to her 'present' til she gets to chew it to bits. More toy corpses.

I guess someone needs to tell the dog toy manufacturers that their indestructable dog toys aren't quite so indestructable after all. Hey, perhaps they could use Jessie as a dog toy tester!
3 comments: 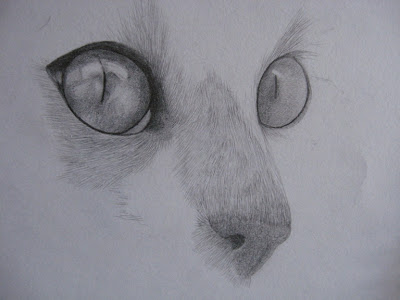 Study for cat's face
graphite 5 x 5
copyright Jeanette Jobson
I can never resist doodling eyes while waiting for inspiration to hit. This expanded a little past the eyes, but still has the therapeutic effect of small strokes making an image arise out of the paper.
7 comments: 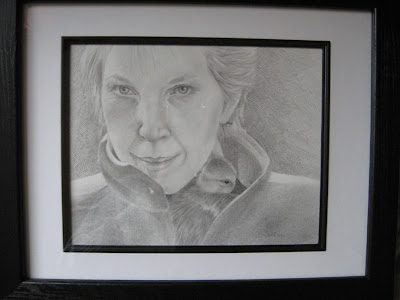 Mother Goose
Graphite 9 x 12
copyright Jeanette Jobson
Here is the final image of Mother Goose completed and framed (the little spots of white are the reflection of the camera in the glass). There were a few more tweaks to get it right after digging it out from the pile of unfinished drawings in the cupboard in my studio.

Some things are worth salvaging and this image had the 'awwwwww' factor in it so it was a keeper. I'm not sure of its final fate quite yet, most likely on a wall somewhere in my house - unless I get a better offer.
5 comments: 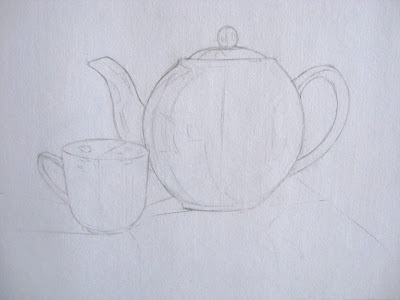 This is the start of a possible still life drawing that is needed for a demonstration. I always love the line drawing part best. I love the clean simple shapes and there is always the fear that adding values will change it into something that I won't like. Of course the values will give it a different illusion, and that is always interesting too. It rarely becomes something that I dislike, it just changes it into something different.

But I still love line drawings.

I do most of my drawings freehand and only use a grid if I really really have to get a perfect likeness. It means that I have take more measurements and really observe carefully to ensure that proportion is correct. There is no shame in using tools to help achieve the final result. A grid or even tracing simply provides the framework for a drawing. Its down to the artist to make it all come together.
2 comments: 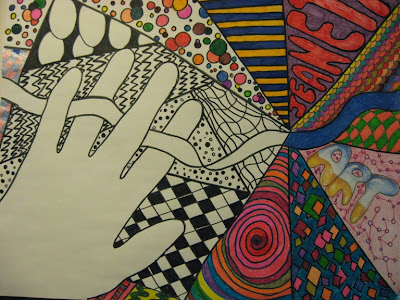 Psychedelic Designs
Marker, ink, coloured pencil
copyright Jeanette Jobson
This is the demo for the design class that I taught the children today and they lapped it up. Freedom of expression, colour and creativity brings out the best in kids it seems and the soar on possibilities. Its very reminiscent of the 1960s psychedelic designs. There are a number of designs created either under the influence of a mind altering drug of the time or stone cold straight. Mine was the latter by the way. Check out Psychedelic Artists for some interesting pieces of art.

Though it had little influence on the mainstream, the Psychedelic movement in design represented a surge in innovation and experimentation that was in keeping with a larger post-war artistic renaissance of the 1960s and 1970s. The backdrop for the movement (which was preceded by the Beatniks and followed by the Punks) is popularly imagined as a whirlwind of drugs and hippies, rock 'n' roll and love-ins. While this may seem a romanticized generalization, it is indeed impossible to extract the movement from the startling developments in the youth culture of the time. Its aim was simple: mind-expansion through visual representation.

As it spread throughout the U.S. and Europe, Psychedelia pilfered from past art movements such as Art Nouveau, Op Art, and Pop Art. Many designers borrowed from ethnic clothing styles with layered colors, patterns, and textures. The result was a synthesis of vibrant colors and exuberant typefaces, which were distorted and warped until the images almost appeared to be fueled by their own movement. Designers, including Peter Max, Victor Moscos, and Wes Wilson, infused their work with a cool and groovy vibe, combining bright and garish colors straight out of an acid flashback. Images trailed off the page, as if mimicking the curling tendrils of marijuana and incense smoke. At the heart, Psychedelic designs were not meant to be viewed, but experienced. The designs sought to capture a vivid moment in time, a certain flash of the mind's consciousness. Rules were made to be broken -- and they were.

There are aspects of teaching children that I find daunting. I'm searching my memory to remember what my girls liked and disliked at the 8 - 12 age range and that memory is limited. So I experiment on friends children and research and read a lot about those age groups, find out about their limitations and expectations.

The kids that come to the class are more precocious than I remember mine being and talk about everything and anything. The kids I have taught talk to me about personal things that sometimes surprise me, sometimes not.

Kids are exposed to so much these days - something I never let my kids do until the age was right. I was the strict parent. Standardized meal times, bed times, monitored television and film watching for age appropriateness - that seems to have all flown out the window. However, I'm not there to judge, simply to show them drawing techniques and make it fun. So far so good. The crows of 'cool' seem to reflect that I'm doing something right with that age group.
2 comments: