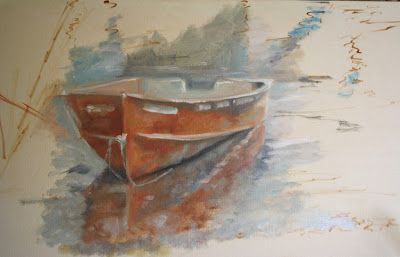 I've spent a little more time tonight getting shape of the Lucie Rose as it should be.  Close, but not quite there yet.  Serves me right for not sketching it out on the canvas first in charcoal instead of straight in with a brush.

I did a small painting, since sold,  of this little boat that I found in Conception Harbour a couple of years ago. It was tied up at a wharf, the tide was out and it was sitting in the shallow water, waiting.  Handpainted on the side was the boat's name:  Lucie Rose.

Looking for something to paint, I thought I'd repaint Lucie Rose again.  The first painting was 5 x7, now this 12 x 24 and in oils again.  The angles of the boat aren't quite right yet but they'll get there.  For some reason, I have a real challenge getting a boat's shape down pat.  You'd think it was simple, wouldn't you? There's something appealing about the tweaks to nudge something into shape and watch it appear on a blank canvas.

There are several types of boats commonly seen around Newfoundland.  Skiffs dories and rodneys.  I must research the differences between them and find out just what the Lucie Rose is.
2 comments:


I've been pulling out old gyotaku prints and seeing if I can revitalize them using various techniques from simple washes to wax batik and so far its going well.

Tonight I pulled out a cod print.  Cod are - well, were - the staple fish of Newfoundland as well as many countries in the world, all harvested off our shores.  With the moratorium on cod in 1992, catching these fish was relegated to several weeks during the year as recreational.  With this short window of opportunity, people fished limited quantities from shore and boat and finding a whole one to print was difficult.  People did not want to give up a food fish easily.

A friend with a boat and a willing participant to go out on the high seas were found and cod were caught.  I asked that my cod be gutted, forgetting that the skipper was a fisherman.  He did the 'fisherman's cut' which is  rather like a t-cut across the throat and down the belly.  Efficient for gutting a food fish, but not great for gyotaku printing.  I didn't tell him what I wanted the fish for, that becomes just too complex and strange a conversation and I'm thought of as even odder then!


So when I printed the poor old cod, there was a gap between the body and head due to the severe cut and even with stuffing the body cavity, the skin still wrinkled, giving a striped appearance to the fish.  I did some prints but wasn't happy with them and left the prints on the 'never never' shelf.  Til now. 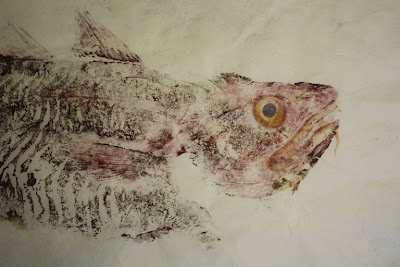 I decided if the sea gives you lemons, you make lemonade.   I added watercolour to the piece, starting first with the eye.  The original print is very fossil-like and does have its own appeal. 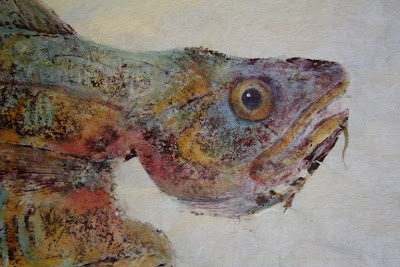 I continued on with colour, subtle at first, then decided to just play and see what happened.  With mostly quinacridone deep gold and a variety of turquoises and blues I enhanced the wrinkles in the cod, giving it a zebra-like appearance. 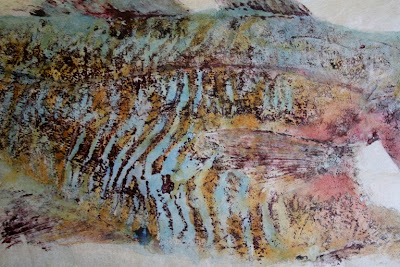 The paper that this print is on is a very pale blue Matsuo Kozo, a thin, crisp 14g weight, Japanese paper that is my favourite for printing and for its strength when wet and in accepting watercolour without it bleeding.  Unfortunately, it's $14 a sheet and while I can get two prints from one sheet, its still fairly pricey in my books.
18 comments: