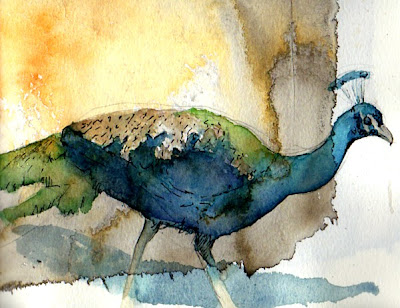 to bring you a short break.

I've run out of steam, which is very common after a long stretch of producing art. Its important to pay attention to your mind and body when they tell you they need  its time to review and renew.  With a hectic schedule of work, commissions sitting on my table and proposals being finalized, my ideas are a bit fuzzy right now and words are not worth sharing with you.

My mind slides into non productive mode and my body needs a rest, so I'm taking a couple of days off blogging to rejuvenate, find some new inspiration and to complete some pieces that need attention.

Meanwhile this peacock will keep you company, painted on a hand made ink stained sketchbook in watercolour.


As artists, we must learn to be self nourishing. We must become alert enough to consciously replenish our creative resources as we draw on them – to restock the trout pond, so to speak. (Julia Cameron) 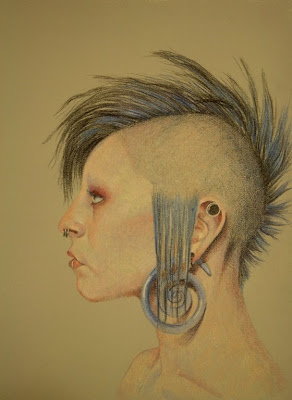 I'm calling this portrait complete, more or less.  There are still some areas that need darkening and refining but it was just a  fun drawing so I'm not worrying it to death and I'm sure people get tired of seeing the same thing 3 days in a row!

I have a grant application finalized and ready to go into the mail tomorrow.  There is always a degree of stress with any application, checking and doubling checking to make sure I have all the necessary forms and documents and support materials in place.

Of course applying for a grant, or more so getting awarded a grant, brings yet another set of stresses. I have to actually produce the work then!  But that would be a good thing.  Deadlines and some pressure really do help push me forward, otherwise I can procrastinate and suddenly the time is up.

Whether I get the grant or not is immaterial as the work that I have planned will still be completed, just not quite as much perhaps and the framing may put me in the poorhouse for awhile. But I'm hoping it will be worth it.
7 comments: 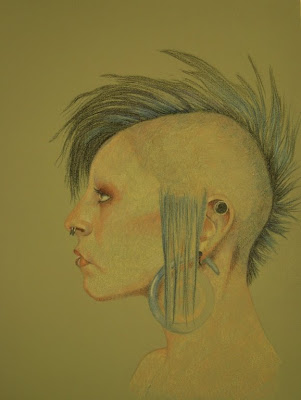 Just a small update on the portrait.  I haven't had much time to draw tonight.  People, packing paintings and the telephone keep me away.

I've started putting down some layers for the hair and building the fine hairs on the shaved section of the head.  I've noticed that my drawing is off here.  The ear is too far back, making the head elongated.  But as this isn't a commission and just something for fun, I'm letting it slide for now.

I'm finding the shade of paper very difficult to capture.  Its a blue that looks almost greenish under artificial light.  This is more what it looks like in the current lighting, but daylight give a much bluer cast to the paper.
5 comments: 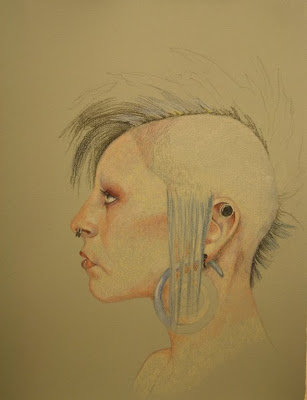 Punk rock has its roots back in the 1970s, at least that's when I first came across it when I lived in the UK.  Wandering down King's Road, Chelsea in London, the streets were populated with a variety of different punks with unique hairstyles and clothing, all seeming to try to outdo each other in terms of outrageousness.  The Sex Pistols and The Clash were the new musical movement.

Lots of people found them intimidating, and some punks used that to their advantage, but I never had any problems.  I found them quite interesting in fact and was fascinated by the hairstyles and how they got them into the peaks and spikes and colours.

One of my stronger memories of the punk days in London was when I drove into the centre of London on one of the hottest days of summer to bring my father in law, visiting from Ireland, to his hotel.   I got him settled, then headed down in the elevator to go out and show him around.  The elevator stopped a few floors down and in entered three punk rockers.  Their hair in stiff spikes, coloured like rainbows, eyes rimmed in kohl, ; safety pins were the piercing jewelry of choice; ripped jeans and heavily studded leathers completed the outfits.

I glanced at my father in law, who hadn't been exposed to this culture previously and hoped he'd keep his opinions to himself at least while in the elevator.  He studied them for awhile, then leaned forward and said in his strong Cork brogue 'Does your mother know you look like that?'  Well, there are points in life where you wish the floor would open up and take you or you see your life flash before your eyes.   This was one of those times.

However, they kind of laughed and ignored the comment, then luckily the elevator reached the ground floor and we all went our own ways. I then explained to my father in law how it likely wasn't a good idea to provoke some punks with comments like that.  I tried to explain that he wasn't back in Ireland where he could strike fear through threat of parental disapproval of what you wore.

Ages ago I came across an image in Deviant Art by nothingreal0 that brought me straight back to King's Road.  I asked the photographer if I could use the piece for a drawing and got approval.  I put the image on my hard drive then life and other things happened and only now am I getting around to drawing it.

This is the start of the piece done in coloured pencil on Colourfix paper in pale blue.
8 comments: