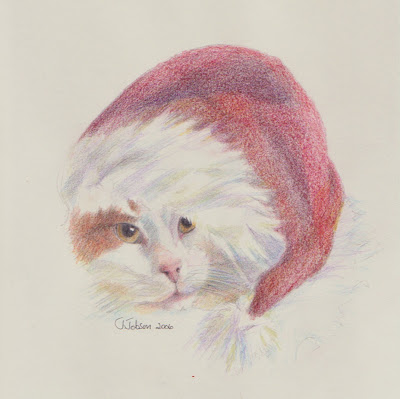 Tripod's Hat
Coloured pencil 9 x 12
Copyright Jeanette Jobson
Yes, I know Christmas is months away and a horrible thought in many ways, but I am thinking ahead to it in terms of art. This image will be turned into cards this year and made available for sale along with several other images. Christmas also becomes a busy time when artists are supposed to become magicians and people want commissions done virtually overnight to use as gifts. I will be gently suggesting to people that now is the time to book a commission or even have it completed to avoid being disappointed.

This is another step in the plan I have to market my art and move my career as an artist into higher gear. Time is the challenge for me, but I am determined to make time and reach the goals I have set for myself.

Another of those goals will be reached when I teach some art courses this fall and I look forward to expanding that side of my artistic career.

”What distinguishes a great artist from a weak one is first their sensibility and tenderness; second, their imagination, and third, their industry.” -- John Ruskin.

Why do we draw? 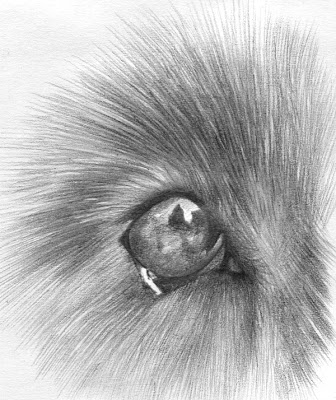 Why do we draw? What makes us put pencil to paper and make marks that resemble the world around us? What makes us crave to learn how to better represent ourselves artistically and to seek out the company of like minded people?

I'm doing some exercises in fur in a class and find myself wondering these things as I do them. I already know how to draw fur, so why do I want to do this class? Will I find a secret, special way to draw that will be my eureka moment or do I simply need to reaffirm that I am doing something correctly and do have the capacity to learn nuances of technique or style that improve my ability to draw?

Humans have been making marks on stone walls, trees and forest floors for thousands of years. Was it decorative then or did it serve another purpose? Why do you draw?
2 comments: 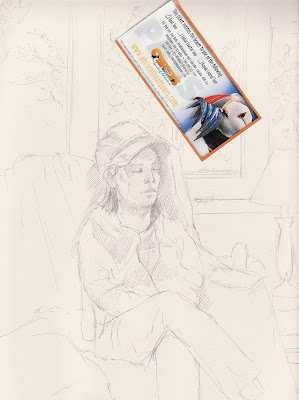 Today is my eldest daughter's birthday - her 31st birthday. And when she stopped by the store to get a bottle of wine tonight, she got carded, much to her delight. There seems to be a bit of a Peter Pan syndrome when it comes with aging in the family which is both good and bad, depending on what age you are. Its great when you're older and don't look your age, but harder when you're trying to get into clubs or bars, even when you're legal age and no one believes you.

Today they went on boat tour out of Bay Bulls to see whales and wild bird colonies. It must have been exhausting as this sketch is the result of the afternoon's adventure. The stub from the tour I had to include when I scanned the sketch just to remind me of the day.
4 comments: 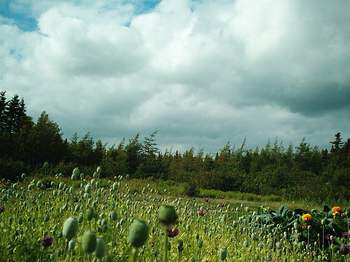 Whoever thinks that rural life is quiet and peaceful, come here now and I'll show you a totally different perspective.

The cat has a voice with a decibel level of a jet airplane when he wants attention.

The ducks have become territorial and spend their time quacking and fighting off any other duck who dares put a big webbed foot into 'their' section.

The geese are making mock charges at anything that moves, including my car as I pull into the driveway each night.

The Embden geese are in their summer pen which means they don't attack me, but the greet the 4:30am dawn with their melodious voices, which then set off the crows and bluejays. Who needs an alarm clock? I have been known to stand under the tree outside my bedroom window at dawn and threaten, cajole and plead with a crow to stop cawing.

There are turkey poults and week old broiler chicks that are upstairs in the barn and they sound like a herd of elephants pounding around, then when you go up, its like playing 'Grandmother's Footstep's' and they all freeze in their tracks or scurry into a protective corner, falling over each other in the process.

And its hot and humid so animals and people are cranky and tired, making life even more difficult. I've just come in from the yard, finding myself scolding the Muscovy ducks BD and Buddy as if they were children, for beheading flowers. "I've told you a hundred times to leave those flowers alone! Now listen to me!' Then I realize that I'm arguing with a duck. So I retreat to the house, deftly avoiding goose poop and making a mental note to hose down the drive tomorrow.

Ahhhhh rural life. Anyone want to swap for a condo in downtown Toronto??
3 comments: 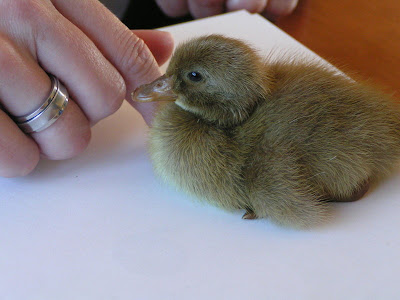 This is a newly hatched Khaki Campbell duckling that joined me for coffee early one morning.
Time is such a relevant part of making art and its been in short supply these last few days. There seems to have been a houseful of people to amuse and feed, as well as a double birthday thrown in for good measure. To top it off, the weather has been the hottest, most humid of the summer so far.

I've tried drawing but with constant interruptions, its not been very successful, so on to my last resort - drawing at lunchtime at work. That too has its risk of interruptions but I probably have a better chance of accomplishing something then than at home right now.

The terms that I need to draw (as opposed to sketching) are fairly simple. A quiet place, no people hovering or interrupting, good light and a little inspiration. Its a hard combination to find at times. Sketching is another matter. I can do that most anywhere, whether people are around or interruptions happen because my mind isn't concentrating at the same level of intensity than when I'm attmpting to render a complex subject on paper.

Music doesn't factor into my art often. I don't need music playing in the background to spur me on. In fact it has the opposite effect, it distracts me. Its the same principle as when you're out driving around looking for a particular street and you turn the radio off so you can concentrate. Or is that just me?

Ideas are floating around in my head for another drawing right now and when this happens I need to create thumbnail sketches to put the idea into perspective. My vision is a large drawing or perhaps a painting that will have impact. Large being at least 3 feet long. Now finding the right materials locally is always the challenge. I'll have to scour the little specialist art store, which is often overpriced, but does contain some treasures from time to time.
2 comments: