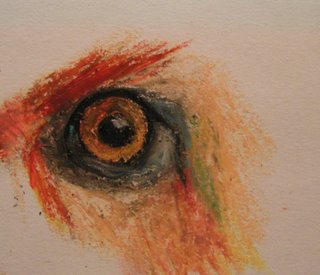 I wandered through an art supply store today and came across some oil pastels on sale. I've used chalk pastels before but not oil ones, so I bought a dozen of them and took them home to experiment. I really know little about oil pastels but have found that they have a lovely, buttery feel to them and like oil paints build up slowly, blending beautifully and you can acheive that same textured effect of layers as well.

Here's part of my experiment with them.
No comments: 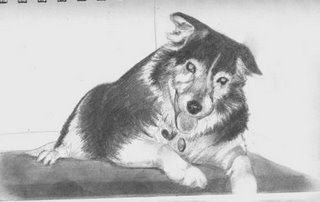 Fridays seem to have turned into very busy days for me. There is the weekly drawing event, illustration friday, the heralding of the end of the weekly drawing thread and the usual flurry trying to fit it all into two days of my weekend.

Here is this week's sumission for the WDT. Scamp, Deirdre's dog, along with the initial line drawing. 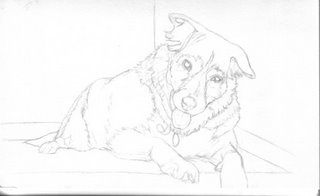 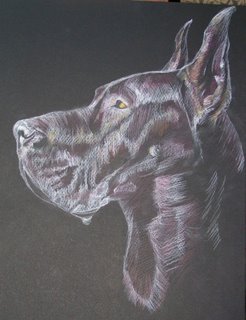 I'm still trying to find time to build up my portfolio of animal portraits, without a lot of success. There just aren't enough hours in the day or night to allow me time to complete works to sometimes even start them.

This is one of the my first portraits of a Great Dane. He's a bit colourful but still quite elegant in soft pastels on black mi-tientes paper.

I love the impact of images on black, but the black can distort colours sometimes needing layers to build slowly.
No comments:

Why is it that we have so little recollection of our very early years? Is it that our brains are not developed enough at that stage to form lasting memory or we don't have the language ability to put experiences into something we learn from? 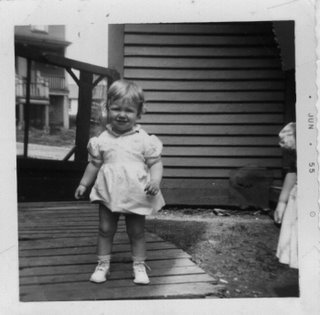 I recall my earliest memories from about 3 - traumatic usually. Falling or being hit at a birthday party - simply because I wanted to see the birthday boy's new rocking horse. Birthday boy is now a cardiac specialist. Perhaps I should remind him of his misdemeanour in youth.

I see images of myself from so many years ago and wonder why I can't recall what I was thinking or doing that day. I want to remember and experience it through the eyes of a child.

Art is a bit like that. You need to open yourself to ideas and colour and experiences and accept them as new, as a child would. You then see the world though new eyes. You can see your morning mug of coffee not as a white steaming mug but as a an image glowing with colour and shape. Each image in life can be new and interesting. You don't really see something until you draw it. Then you explore each curve and line and find things you never have discovered.

Here is a sketch from Illustration Friday's weekly inspiration for drawing. Feet. I like the shadows imprisoning them. 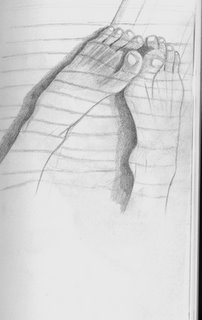 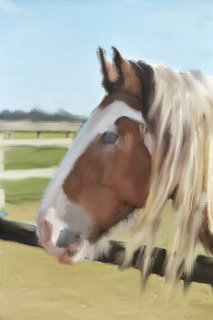 I have a digital drawing tablet that I pull out from time to time and tinker with. I am still finding my way around Photoshop and similar painting programs as well as playing with other paint specific programs. The learning curve is similar to Mount Everest in Photoshop and as soon as I learn one technique, it slips from my mind like water down the drain. I continue to play with it and experiment.

There is controversy over whether digital art is true art. It can be as simple as a cleverly manipulated photograph or something complex with many layers and drawing skills requiring hours of time and program knowledge. So is it art or cheating as some people think?

I prefer to think of it as art, especially the polished, complex pieces. Yes, they are computer enhanced, but the colours and details and shapes are chosen by human hand in the same way as they would be if drawing or painting on paper or canvas.

Here is my meagre offering in experimentation. You can decide for yourself if it is art or not.
No comments: 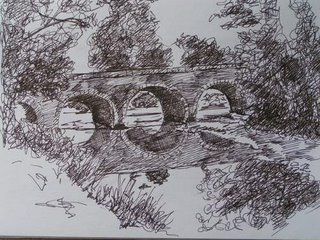 There is a weekly drawing event on the forum that I frequent - quite different from the weekly drawing thread that I also participate in. This past weekend I had a flow of creativity.

Its difficult to describe. It is a feeling that transports you to another place and gives you focus and the pen or pencil or paintbrush seem to work effortlessly on their own without havng to put thought into strokes. If it were the 16th century, it would be called 'possession' or 'witchcraft'. Whatever it is, it doesn't always happen and Ihave learned that it can't be forced. It is either there or not. When it is, it is glorious. 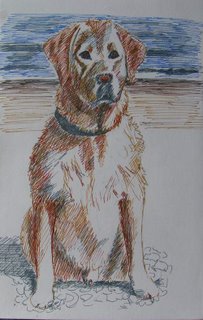 Now having said that, it doesn't translate into perfection for each and every drawing and in many cases, they are still fodder for the bin or the fire, but at the time of production they feel good.

Here are some results of this weekend's drawing event. All based on Irish subjects and all done with pen and ink - koh-i-noor nexus - sepia and coloured ink. 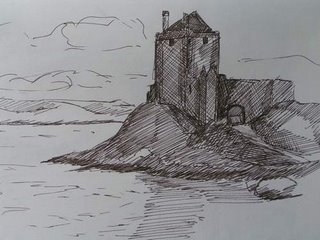 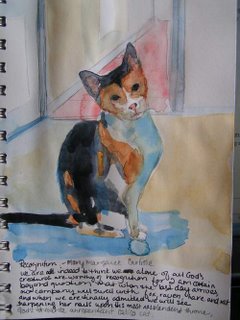 I am experimenting with colour and loose sketches,combined with writing as I start a new sketchbook. I pulled out an ancient box of watercolours and tried my hand and learned that I am out of practice and that the paper in the sketchbook isn't heavy enough for waterbased mediums. I knew that before I started, but the colour won the argument in my head.

I think it is time I tracked down a source for a decent Moleskine sketchbook. I haven't found a source in Canada yet, but I live in hope.

Music inspired the next - Maria Muldaur. I usually listen to music as I draw or paint and today that jazz/blues sound worked well. I was looked at the cover of her cd 30 Years and l liked the freshness of the young earnest version of Maria. Sepia ink did the rest. 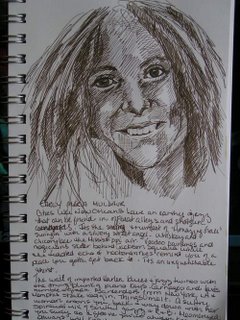