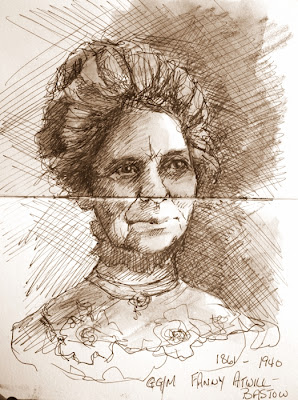 The week has gotten away with me and I've spent most of it doing the "behind the scenes" work for art instead of being planted in the studio.

Playing catch up from being away from work has taken its toll on my brain and then there's the switch to the new studio.  Its a lot more time consuming than I had anticipated but I should have a good dent in it this weekend and hope I can start some work in there soon.

Its also the season of juggling galleries, with seasonal ones opening and needing pieces delivered.  Packing, delivering, communicating, reviewing...There's just not enough of me to go round some days!

But the sketchbook still is with me and even if I don't get much studio time, I take a few minutes here and there to put down some lines.   This sketch is of my maternal great grandmother, Fanny Jane Atwill, born in England in 1861 then moved to St. John's.  There was some trips back and forth it seems before they settled finally.  I would say she was likely in her 70s when the photo was taken which I used to draw from.  The quality wasn't great in the image so detail is limited.  The high necked lacy covered dress, was  that a "for best" or every day wear I wonder?

She has a glint of mischief in her eye and I think she would have been an interesting person to know.
6 comments: 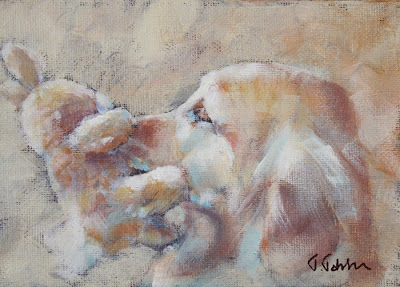 I thought there should be a more archivally permanent version of the Billie and Bunny sketch that I did last week, so here's a 5" x 7" in acrylic of the same piece.  This is available for purchase on Daily Paintworks and you can also purchase a variety of reproduction options and note cards of this painting through Fine Art America.

I have also made available the first four Fishy Bits prints as notecards and reproductions as well and will continue to add prints as they are completed.  Original prints are always available from my website www.jeanettejobson.com