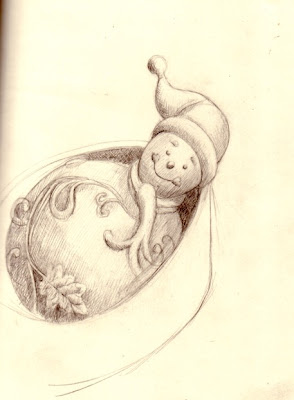 Bisque ornament
graphite 5 x 8
There isn't a single Christmas ornament up in my house. No tree, no lights, no garlands. Not yet anyway. I have boxes of them in the basement, but haven't wrapped my mind around decorating yet. But when I am out shopping, I can't resist peeking at ornaments that are for sale. Snowmen especially. Why I love snowmen, I can't tell you, but I do. Especially ones that aren't coloured like this little guy that I found the other day.

So while having coffee this morning, I propped him up in his box and sketched him. Painting is quicker and more colourful, but drawing is indeed my first love. Its that ahhhhhhhh factor when I get my pencil out that painting never has.
4 comments: 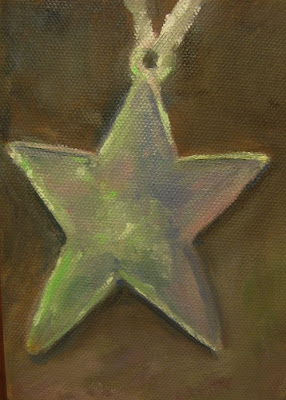 Do you remember those stars you made as a child around Christmas? They were cut from cardboard and carefully covered with aluminum foil then hung from the tree proudly. They were misshapen and wrinkled, but to you they were the best thing you created and you loved them as they caught the light and twinkled.

That's why I bought this pale irridescent glass star. It reminded me of those tinfoil stars made many years ago. The colours change with every movement, going from pinks and lavenders to greens, yellows and blues.

I have learned that painting irridescence isn't easy to do. T.O.O. (the other one) suggested shiny paint, as my frustration with this piece reached the main floor of the house. The suggestion resulted in more frustration.

Then I decided that I need to really understand irridescence. Can irridescence only be recreated using pearlescent paints or man made substances outside of nature? Dichroic glass is a prime example. Or is it a matter of very detailed dissection of a subject through colour and value changes, not daring to breathe or move while you do so, lest the light and colour move with you?

Iridescence is an optical phenomenon in which hue changes with the angle from which a surface is viewed. Iridescence may be easily seen in soap bubbles and butterfly wings.

Iridescence is caused by multiple reflections from multi-layered, semi-transparent surfaces in which phase shift and interference of the reflections modulates the incident light (by amplifying or attenuating some frequencies more than others). This process is the functional analog of selective wavelength attenuation as seen with the Fabry-Pérot interferometer.

Erin Parish is one artist that I've discovered whose work gives that wonderful feeling of irridescence. She does use multimedia though and I wonder if that is the trick to making irridescence more believeable than in just paint.

I did find some information on interference pigments that may unlock some secrets to painting irridescence. I know the illusion of irridescence can be achieved on some scale in water, shells, etc through paint. This glass star doesn't present the lustre that I'm looking for. External influences in terms of lighting, movement, background surface and my skill level and reproducing it all come into play. I will keep looking for that lustre.
5 comments:

One up, one down 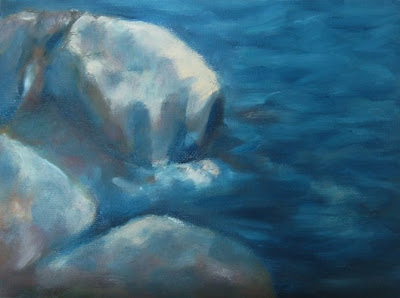 I'm calling this painting done. I've tweaked in Photoshop, but can't get it to quite resemble the original in colour. Yes, its fairly blue but not that blue in reality. Winter light is not fun and having dark morning and night even less fun.

I was looking around for something to paint tonight and found an irridescent glass star - a Christmas ornament. Bad move. I swear the colours in that piece changed each time a blinked. I'm not brave enough to show it here. Its beyond redemption. I may work on it more but somehow I think its destined for the 'paint over' pile

I need to start a new drawing. When painting frustrates, drawing soothes. And oddly enough, the more complex the drawing, the more relaxing I find it. I'll see if I have time to get a line drawing done tonight before bed calls me.
4 comments: 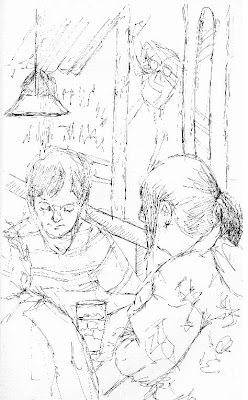 I have a number of sketchbooks that I squirrel away in a cupboard once they are filled. They range from Moleskines in all sizes to larger sketchbooks, handmade ones, different papers, watercolour, cheap, expensive - they run the full gamut.

Ultimately they all serve the same purpose. They hone my drawing skills on a daily basis and it is a very rare day that I do not put something into one of my sketchbooks. I also have sketchbooks 'in progress' scattered throughout the house along with pencils or pens so that when the mood strikes the surface is always close to hand to capture the thoughts.

I don't always share the content of my sketchbooks online likely because its not finished work or even work in progress. It can be very loose lines almost like shorthand, readable only to me, sometimes with notes, sometimes not. 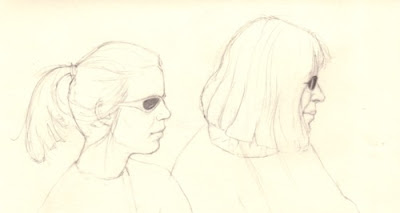 What do I sketch? People mostly as they're what interest me most. I have a little contest with myself to see how quickly I can capture gestures and lines before someone moves or before they figure out what I'm doing. Sometimes sketches or thumbnails make it into larger pieces, but often I simply draw for the sake of drawing, not with intention of completing it back in the studio. 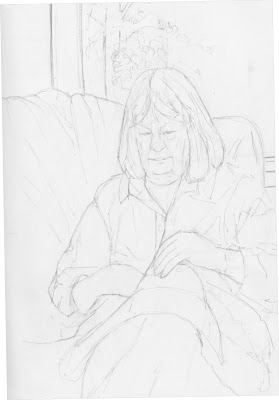 There isn't often colour in my sketches either unless I decide that a sketchbook will be completed with only one colour pen or pencil. I've gone through my 'red' phase now and am considering the next sketchbook that I may get more creative with before I actually start it by colouring pages or adding media to the pages so each sketch in the future of that book will be a surprise to me.

I do like to look back over sketchbooks and they form a visual record of what I have seen and, like photographs, the images bring back memories of events and words.

I like to think I'm also creating a little bit of 21st century history for future generations who may look through these sketchbooks. They will be their windows to the past.
6 comments: 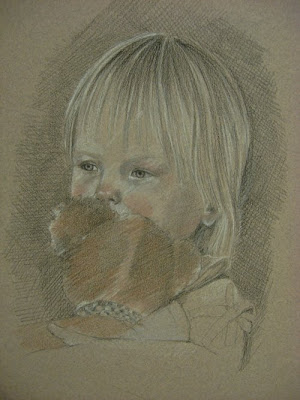 Buddies
charcoal and cp 9 x 12
Most of my day was taking up with driving to and from town in horrible, snowy slippery conditions to deliver paintings to an exhibition, do errands then drive back again in the evening. There were very few sales at today's exhibit, I'd say due to the weather conditions. However, there's no predicting weather in advance, so we take it as it comes.

In a mid afternoon break, I took half an hour to do this sketch of my grand daughter and her bear. I've been concentrating on regaining my oil painting skills lately and haven't been drawing as much as I like. I need to maintain that precision of drawing, as it pulls me so strongly, more than paint does. I love detail and find the transition to loose, broad strokes can be challenging. It takes a different mindset. I don't want to go into painting so deeply that I lose my drawing abilities, so I keep switching back and forth.

There is almost a right brain/left brain functional switch between drawing and painting as they're such different ways of creating art. I find I'm thinking of nothing but the moment when I draw, especially in detail. But when I paint, I'm thinking ahead to where the next stroke will be , what the value or colour will be, how much paint to apply, etc. It may be just my need to practice more in painting that makes my brain question itself where in drawing, it comes second nature to me almost without thinking.
4 comments: