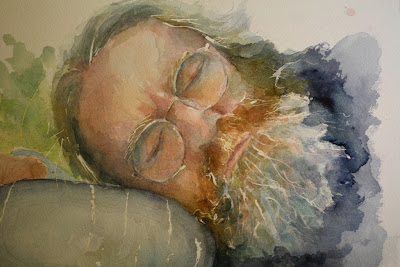 I am slowly working my way through unfinished pieces.  My goal is to have them all complete before the end of the year.  What is it about my inability to complete paintings sometimes?  Easily distracted perhaps.  I always see something else that I want to get down on paper or canvas and think 'I'll just start this and finish the other later.'

This is a portrait of Terry Rielly, a gifted musician and entertainer.  I've known Terry for....oh more years than I remember.  We recently became reacquainted and I promised him this portrait after seeing the image of Mikaela's Rock online.

I started the portrait in watercolour and then, with other things overtaking it, it was put aside.  Now I've pulled it out and have started adding more layers of colour and am probably about two-thirds near completion.  I thought the beard would be my undoing, but instead it may be the rock!

I promise Terry that you'll have the final piece soon!
4 comments: 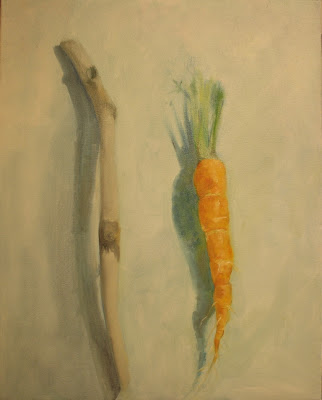 My painting time has been limited this week, as I prepare for the exhibition which opens on Thursday.  This evening after work, all the pieces were hung, ready for the opening on October 6th.  If you're in the area, I'd love to meet you there.  Great art, nibbles and drinks will be on hand from 5 - 7pm at MUN Botanical Garden, 306 Mount Scio Road, St. John's, NL.  You can read all the details here.

Here's a little glimpse of one of my pieces that you can see at the exhibit.  Its a gyotaku ocean perch, or red fish, as they are often called here.  Reflections are part and parcel of pieces framed under glass unfortunately.  Drop by on Thursday and I'll tell you how these unique gyotaku prints are created. 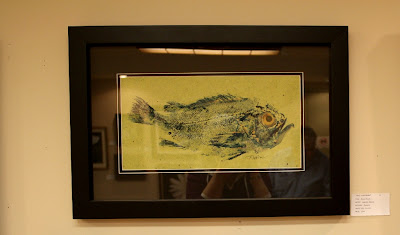 Meanwhile I've had a few minutes here and there to add a bit more paint to the carrot & stick painting that I began a few days ago.  It set my mind off on lists of idioms  or common sayings that could generate paintings...its endless how one idea sparks another, isn't it?  Which one would you choose to paint?
3 comments:

The Carrot and the Stick - in progress 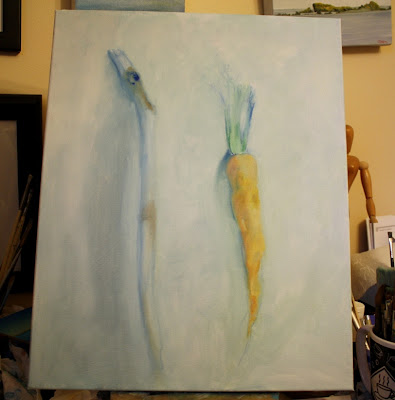 Ideas for paintings come to me at odd times.  Driving to or from work, in the shower, or when I wake in the middle of the night and can't sleep.  In my internal struggles in art there are rewards and setbacks.  Paintings that didn't go the way I want, paintings that sell, rejection and acceptance, on and on it goes.  For each stick blow, there is a carrot to reward.  Sometimes it goes in the opposite direction too.  I prefer the stick first personally.

So this thought of the carrot and the stick idiom stuck in my head in one of those random times of thinking too much and I knew it had to be put on canvas.

The concept has sprung, literally, from the ground up.  I dug some carrots from the field, trying to find just the right one and then a quest for a stick that would meet my needs.  With so many trees around and lots of damage from last year's hurricane, there was no shortage of dead branches to choose from.  I finally decided on a piece from a laburnum.  The pale smooth branch with small pieces of golden brown bark still clinging to it and little knots adding interest worked well.  I also harvested more branches from other species such as larch and maple then headed to the studio to work out composition.

I played with a number of compositions with dominance from the stick or from the carrot, but finally decided that equal representation worked best.

This is the start of the layout of shapes and values and I'll start getting into more depth and detail with it soon.  Its being painted on 16 x 20 gallery canvas in oils.
6 comments: