This murky wave containing sand and silt still lets light fill the curl as it topples over.  The movement is on a permanent repetition, yet each wave is different, its own composition of light and shade. 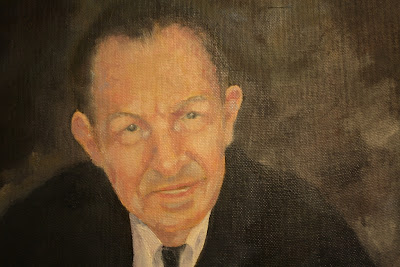 I've worked more on this today as I had the day off due to a late spring snowstorm. I've added more definition and smoothing of features with thin layers of oils.  The hair is...I'm not sure yet.  His hair wasn't grey even at 70 years of age, just a touch at the sides and always kept military short. Conveying that is not as easy as I thought as the scalp shows through as an undertone almost.

I think I'm going to leave the face as is, but give more definition to the clothing.  He was sitting forward in this piece and I don't have the photo anymore so I need to recreate how the jacket will look in that position for light and creases, etc.  I'll set up a jacket in a similar position tomorrow and work from that.  Everything can be recreated when needed. 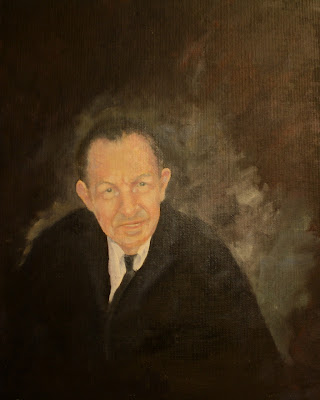 I still can't seem to get a decent photo of this painting despite tweaking camera and photo editing.  I think the colours are close at this point, but images on monitors are never perfect.
4 comments: 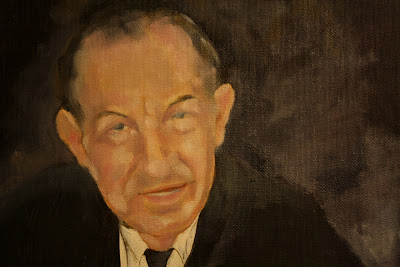 My father has been dead for over 20 years. About 6 months before he died I started a portrait of him, but it was never finished.  He saw the start of the piece and liked it, but life - and death - got in the way to stop its completion. Although I've tried to draw and paint a portrait of him several times since, it has just never worked out as I wanted.  The likeness evaded me at every turn. 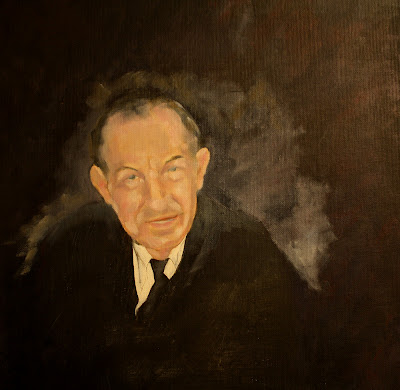 I pulled out the old portrait tonight to look at it again and see if I could revive it.  The image below is the original portrait that was started about 21 years ago.  It was painted in acrylic and as it was a thin layer I figured I would take a chance and paint over it in oils.  The canvas board is 16 x 20 and the portrait a head and shoulders quite small in a dark background.  Perhaps it was symbolic at the time, who knows? 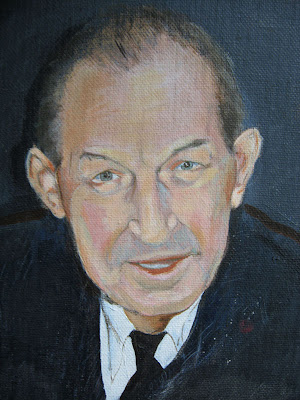 Using another image of him, as the original photo is heaven knows where, I started repainting his features in oil and lightening and softening the background around him.  Getting a photo of the current painting has been nightmarish, but this is the best I can do for now.  Another one in daylight tomorrow may be better.  I'll continue to work on this.  I don't want it to be heavily detailed.  It should be more like a memory, a bit misty.

This time I think its going to work.
7 comments:

Janet McDonald from the Newfoundland and Labrador Arts Council did an interview with me about my gyotaku project last week and it is on the front page of their website.  NLAC showcases some of the work of grant recipients through their site. There you can get a deeper insight into the project and how it progressed.  The NLAC generously funded the grant which made it possible for me to spend the past year knee deep in fishy things.  Thank you.

I have also provided a short video of some of the images that I have created using the gyotaku technique. It is also available on my website. Make sure you have the sound turned on for this.  The Japanese music is so calming. The gyotaku workshop will be held on April 16th and you can register for it through the Workshop page on my site.  I might even bring Ruby along...

Earth's Eye
6 x 12   oils
A lake is the landscape's most beautiful and expressive feature.  It is earth's eye; looking into which the beholder measures the depth of his own nature.  ~Henry David Thoreau

Late last summer I had taken some images of the water surface of Gallow's Cove Pond just as sun was setting.  There was a little chop on the pond and the movement of the water was hypnotizing.

I started out then using an old 6 x 12 canvas, repainting it and laying down values for the water, but it didn't go any further.  I picked up the canvas again the other night as I had my oil palette out and started adding detail to the surface.

It now looks abstract with images that I can read into it almost like watching the flames of a fire.  Moonlinght, water, sky, cloud, mist, fog....its a combination of everything.  As the surface of the old canvas was a bit textured, it shows through under the current layers.  I'd prefer a smooth surface for this so this will go to the 'study' section of my studio wall while I consider its fate.
11 comments: 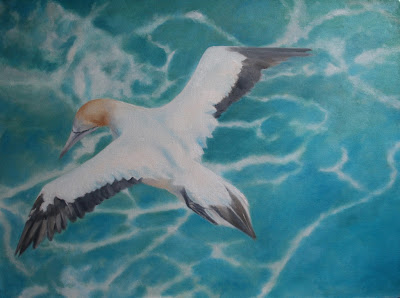 I'm having a love/hate relationship with this painting.  It seems as I get one part to look as it should, another part pushes forward throwing it out of balance.  That's progress for you perhaps. 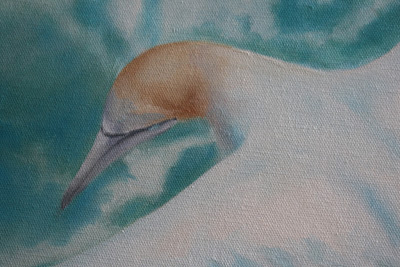 I'm still glazing and building layers of colour.  The colour of the sea still evades me but I am coming to terms with it now.  I'll let it evade me and create the colour that suits me.  Right now its not the right colour.  Another couple of days drying then some glazes to tone down the colour will help.

The gannet needed some adjustments for its wing shapes and I'm beginning to add some detail to the feathers.  I don't know if I ever want to paint another bird.  Too many feathers and they are nothing something I've ever painted a lot.  Its all just light and shade right?  That's what gets me through it.
7 comments: