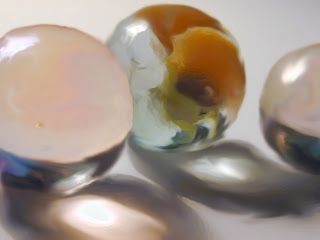 Although I don't do a lot of digital painting, sometimes I like to play around with it and see what I can produce.  It saves me hauling out paints and brushes and satisfies the lazy part of me.  I have a number of paintings in my head and that can lead to overwhelm so often a little study here and there keeps the craving in check until I get a piece underway.

This little study is in oils.  I liked the effect of the light through the glass marbles and tried to capture it.  I love drawing glass but haven't painted it much.  I need to follow through now and put some on canvas.  This also appeals to me as a drawing or pen and ink piece.  The beauty of creating digital art is the flexibility of changing mediums and doing studies.  Just another tool to help the process of composition, colour and technique.
6 comments: 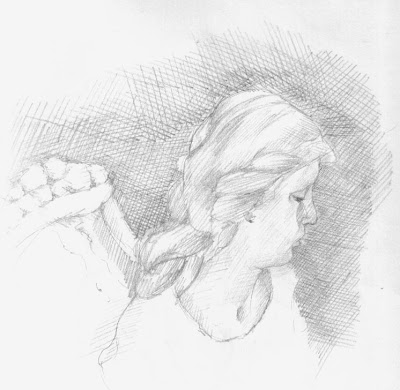 I have a craving to do a detailed drawing of an angel.  Why I have no idea.  Perhaps its the season or something that's triggered the thought somewhere.  In cemeteries that I wander through I always look for lovely angel statues and end up with lots of images.  There is a certain bleakness of stone angels in that setting.  The greys and greens are the contrast of life and death, maybe that is the appeal.

I did this sketch of an angel, I can't remember where the reference came from.  The photo is of an angel found in one of St. John's oldest cemeteries where a number of relatives are buried.  I think there is a painting in there, I just need the right lighting so a few more visits may be necessary and perhaps the addition of a little snow could be interesting. 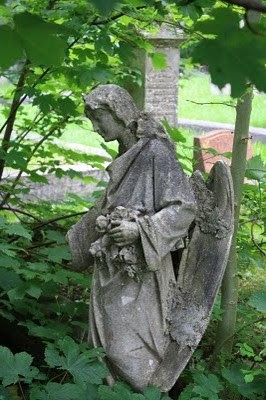 There is a lot of appeal is setting up your own compositions and images from choosing the subject, the lighting and composition.  With images from other sources being always a chancy proposition these days, artists need to rely more and more on their own resources and abilities to create the perfect piece from start to finish.
3 comments:

Rejection has a good side 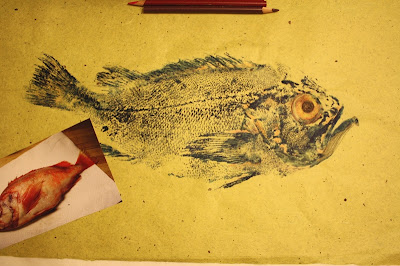 I was bemoaning the fact that I had three pieces tied up in a jury process preventing me from adding them to an exhibition, but today's letter resolved that problem.  None of the pieces were chosen and I now have free rein to do as I want with them.

There's always a twinge of regret when a rejection letter arrives, but in this case its rather more relief as I needed the pieces to bulk out the body of work.  Also I am waiting for another response from another two juried competitions.  One I should hear from sooner, the other not til 2011.  The waiting time is always the killer for me.  Part of me wants to know right away and the longer I wait, the more opportunity presents itself for the very piece being juried but I just have to put the ideas to one side and pretend that piece doesn't exist until I hear officially.

Rejection is accepted more easily now than it was many years ago.  The pieces aren't as precious to me so I don't take it so personally when an organization doesn't accept them.  I know there are more still in my head that will have their moment in the future.

Meanwhile, I am making more decisions around final pieces for the gyotaku.  This ocean perch on a green Dainshu chiri paper appealed to me.  I've added the eye using mostly coloured pencil with a touch of watercolour to add depth.  On Japanese papers, the sharper tip of the pencil roughens the paper til you're eventually just moving fibres around instead of applying pigment, so a light wash of watercolour helps add depth.

Of course, I don't have a frame to fit it here.  That's always the way when I like something, so if I want to include it, I'll need to have it custom framed.  It may sit for a day or two as I have a few other prints of these perch that are in the running too.

However, tomorrow its off to the printer to get some reproductions of a salt cod print done and perhaps a workshop poster if I can get that completed tonight.  The prints will be thank you gifts for people who have helped me along the way, with some original prints for those who really went out of their way for me. I wish I had an illustrator's mind set when it comes to creating posters, I seem to make the most boring ones imaginable.
3 comments: 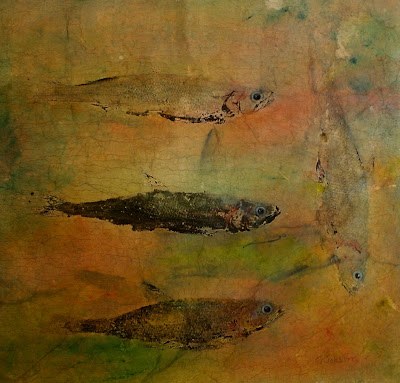 Rebel
Gyotaku print on rice paper with watercolour
This is the completed print of the smelt that I started on its road to completion in the last post.

I really have to get my thumb out and start getting things in gear for the end of this gyotaku project.  Part of me is a perfectionist.  I complete a piece, put it in a frame, then do another piece that I like more.  And so the cycle goes, as if I'm always trying for something better.

Each of these tasks is worthy of a blog post in its own right.

I've set myself a deadline of December 31st to have all these tasks complete, so blog posts may be a bit scarce over the next month.  Oh yeah, Christmas is in there somewhere too isn't it?
10 comments: