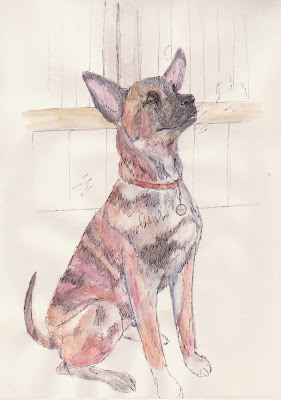 I can never resist a chance to draw a dog picture and today was no different. Even with other things pressing, I did this quick pen & ink then used my graphitint pencils and a wash on it. The dog is that brindle colour which is difficult to render well. He's rather more striped like a tiger.

I've started some shading on my symbolic drawing and its coming along. I still need some decent references for fish before I tackle the fish in my drawing. I want to ensure they look as realistic as possible and can't really do that out of my imagination.
2 comments: 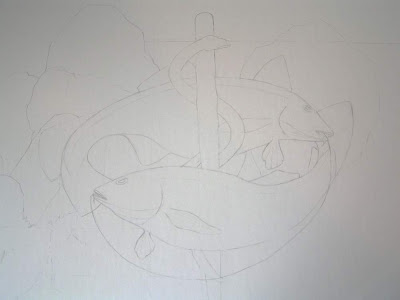 I transferred my drawing of the symbolism portrait onto 22 x 30 illustration board. I've made some changes to it and I'm still not sure if its where I want it to be quite yet. The central images are fine, but I'm not quite sure where I'm going with the right side yet. I don't want to overcrowd the drawing, yet I want it to contain elements that are important to me too.

It may be one of those things that simply come to me as the drawing progresses. The photograph isn't great, as the lines were quite faint on the drawing so the camera didn't register them well and I had to try to adjust them with a graphics program. 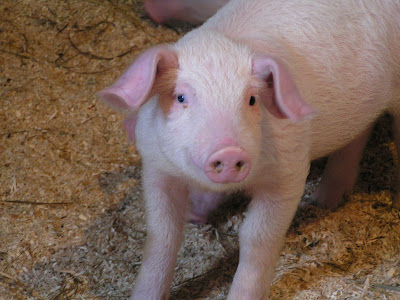 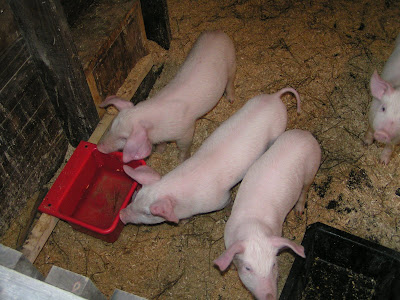 Here are the newest additions to the farm. I know they are intended for food, but they are rather cute and do have personalities. It will be interesting to watch them as they grow. They're about 6 or 7 weeks old. Two will be picked up this weekend by a neighbour and three will remain. I'm sure there will be some drawings taking place around them.
4 comments: 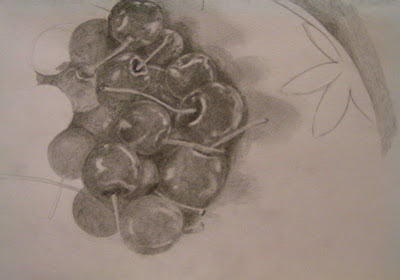 Cherries
Graphite sketch 5 x 8
copyright Jeanette Jobson
Wendy Prior, that wonderful New Zealand artist tagged me. Being tagged means that I must reveal seven secrets about myself and then tag seven others to do the same. That may be a challenge at this point as most of the others that I know have been tagged already. But I'll see what I can do.

Now let's see what many of you don't know about me....

1. I hate marshmallows and cotton wool. Its a texture thing. I can't bear to touch them and you couldn't pay me enough to eat a marshmallow.

2. I met a Hungarian prince at a nudist beach in the UK. My art mentor, Tom Greenshields would go there and take me along from time to time. 'Good drawing potential here...' he would say. Anyway, a good line perhaps, being a Hungarian prince, I mean, how could I ask for ID?

3. Early in my art career, I worked as an artist's model for life classes. It was interesting to see both sides of the easel and the pay was good. I also learned the art of staying very still for long periods of time. I have no exhibitionist qualities, but felt quite comfortable in the role most of the time.

5. I love whales, and being very close to the ocean, see them regularly in season. When my children were younger, I would 'call' the whales. This would embarrass the girls no end. But the whales always arrived on cue.

6. I was asked to be an extra in 'The French Lieutenant's Woman' when it was being filmed in Lyme Regis. Unfortunately, I couldn't do so at the time as I couldn't find a child minder for my daughter for the day and couldn't really haul her around all day in period costume. However, as it was friends who made the contact (he was the art designer for the set) I was asked to the final cast party and met Meryl Streep and Jeremy Irons who were both lovely people.

7. I have met Paul King of Mungo Jerry, Denny Laine of Wings and Eric Clapton. They all used to came into the pub where I worked, either socially or professionally . I'll leave the younger of the readers to Google the names and find out who they were, as I'm sure you're saying 'Huh? Paul who??'

Now who to tag??? Seems I can only come up with five that are as yet 'untagged'.

Monica Gillis, who inspired me to work with stone.

Terry Banderas, whose paintings and pen and ink work are always fresh and bright.

Farm Girl Fare. Susan's adventures on a working farm are a constant delight.

Loretta's blog - Pomegranates and Paper is simply delicious with every reading.

Jeanne Grant's constant work at her art is an inspiration as is her progress.
3 comments:

I started transferring my initial sketch for the symbolic drawing onto a 22 x 30 piece of illustration board last night. I got the fish image on there, then didn't like how the other symbols tied in - or didn't tie in, so I'm rethinking their positions and if they should be something entirely different. Boy, this drawing is taxing my brain!

Today I spent two hours in media interviews, standing outdoors by lakes,, fighting with sound equipment that didn't want to cooperate and with the wind which liked to play havoc with the sound equipment. It finally all came together and I got the interviews done for local news stations. I hate watching myself on television so I tend to not watch if at all possible. Why is it we don't like watching ourselves or hearing ourselves? Do we have such a different vision in our heads of what we are than what is reality?

Today three little piglets came to the farm. Well, five actually, but two are destined for Gerhardt, the three will remain here to grow and become food eventually. I'm not sure how I feel about that. I'm used to having chickens and turkeys and geese as food animals, but larger animals seem more personal somehow.

I went into the barn to watch them, little pink and white bodies sleeping, snoring slightly. They are 6 - 7 weeks old and about 30-40 lbs right now. They seem exhausted after their day of adventure but I'm sure they'll adjust and be bouncing around tomorrow. Then I'll have some photos of them to post.
No comments: 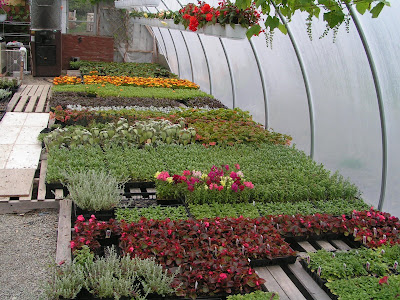 The greenhouse is full of flowers - or half grown plants more like in preparation for a wedding. We have been asked to provide the flowers for an Indian wedding that will take place in mid July. Do you know how many flowers are used at an Indian wedding? THOUSANDS. Do you know how important an event this is in Indian culture? BIG. Does this concept worry me? You bet it does.

There are so many variables with growing that one fell swoop of Mother Nature and the bride could be walking up the aisle or whatever she walks up, round or into, with Walmart plastic flowers instead of the real thing. So keep your fingers crossed that all is well. Right now everything is in a commercial sized heated greenhouse, simmering along nicely. 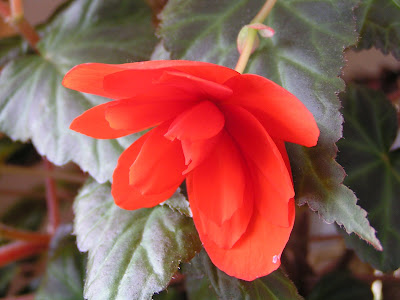 Indian weddings are all about colour with marigolds playing a large role in providing the oranges and yellows. Currently there are 4,000 marigold plants growing, along with countless other varieties of flowers, including hanging begonias which will form centre pieces of floating flowers in special bowls.

Lavish affairs come with a price tag and in this instance money seems to be no object. I would anticipate that this little party will cost in the region of $50,000 all in. Let's hope they don't get divorced six months later...
3 comments: 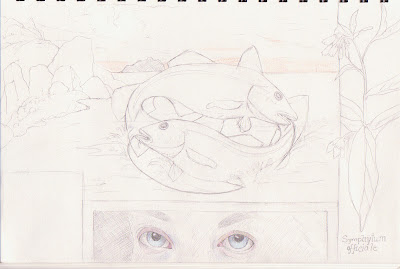 I've finally decided on an image for my symbolic self portrait. I just have one more image to create in the lower left corner. The colour in the drawing was more me doodling while on the phone than how the real drawing will evolve. It will be in graphite only at this point. I haven't made any decisions about colour and know that this will be something that the drawing it self will tell me.

The challenge is now to transfer it to a larger scale, about 22 x 30 most likely. This image is quite small and is the thumbnail sketch. I guess gridding is likely the best way to go to ensure I get the main elements in the right places. I can fill in the details from there.

While the images are there, I won't explain much about the symbolism. Much of it is personal and its always good to let the viewer put their own spin on what they see and how they interpret it.
2 comments: