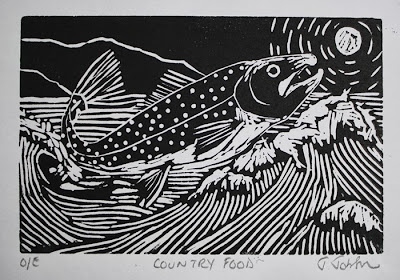 My head is all over the place lately.  I mean I know my focus in art but so many other things get thrown in the path to deal with.  But I am making progress.  One 24 x 30" piece 3/4th painted, another sketched out on a canvas and two more in sketch form waiting in the wings for decisions on size and support.

But today its the 15th of the month and you know what that means don't you??  FISHY BITS!!! :)  Yes, I am slightly crazed at this point but it too shall pass.


The October print is of an Arctic Char and called Country Food.  Northern aboriginal communities including the Inuit, were dependent on the Arctic Char for food and have used it for centuries as a staple fish.   Country food are things like arctic char, seal meat, whale, caribou etc.  Originally these foods were consumed for day to day survival.


Country food remains an important food source for many Inuit. In 71% of Inuit households in the Arctic, at least half of the meat or fish eaten was country food.


You can purchase this print or any of the previous months' prints from the Fishy Bits page on my website.  All are original prints, no reproductions, printed in oil based inks on various Japanese papers.  This month its on a brilliant white Subi printmaking paper that really makes the Carbon Black ink contrast well.  The paper is 9" x 12" with a central print measuring 4" x 6".  Each print is named and signed and all prints are open editions.
6 comments: