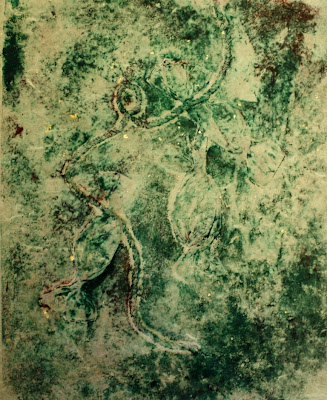 A Kiss is Still a Kiss
8" x 10" on unryu
I've been building a collagraph plate over the last week or so, off and on and thought it was about time I took it for  test run today.  A collagraph is a printing plate, producing a relief print, but built up of pieces of low relief objects or paper/card that become the print surface instead of carving into a block, as with lino. 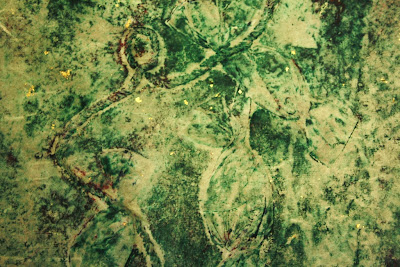 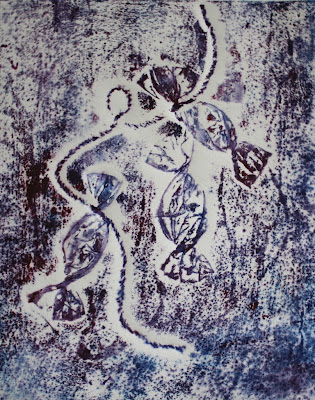 While cleaning out the studio last week, I found a few old Purity Kisses candies and tossed the candy but kept the wrappers more or less the same shape as when they had candy in them.  I glued them to a piece of backing board along with some yarn linking the wrappers and coated the glued areas with sand for texture.  Once the glue dried, I gave the whole plate several coats of varnish..  I used Liquitex gloss medium and varnish.  It provides a water proof surface on which to ink the plate. 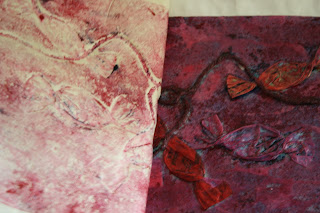 I used a brush and Caligo water soluble inks to cover  the plate and then wiped off most of the ink.  I experiemented with several papers for these first prints.  BK Rives was used for the first 4 and I soaked it and think used it a little too damp as it bled on the edges and the definition wasn't as crisp as I wanted.  I added some washes of watercolour to one of the initial prints just to see how it would look and hold up to the extra water.  It passed well on those counts. 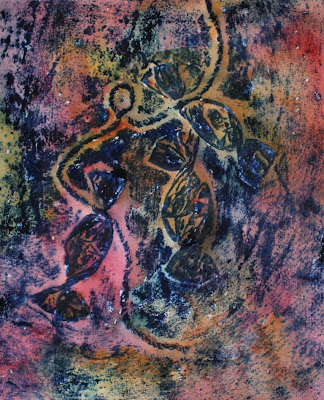 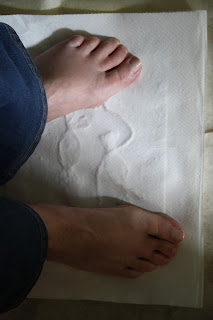 Additional prints were made using sekishu, chiri and a piece of unryu paper that had flecks of metallic gold in it.  I liked the unryu and sekishu papers best for this printmaking.   With a light spray to dampen them enough for the fibres to relax, they seemed to pick up just the right amount of ink from the plate.


I used my hands to press the dampened paper into the cracks and crevices of the paper but still didn't get the results I wanted, so I reverted to the 'foot press'.  This involves sandwiching the plate and print paper between layers of paper towel and felt  and literally walk over all over it to mimic a printing press.  And it works beautifully.  Just don't let anyone watch you do it or they'll ask lots of strange questions...
7 comments: I've added more layers to the flower and its starting to get a bit more definition.   The art board is a little odd and sometimes seems grainy when you lay down the paint but then dries to a smooth velvety finish which I quite like.

I can't quite get the colour on this here.  Its a richer pink in real life.  Perhaps daylight will be kinder.
6 comments: 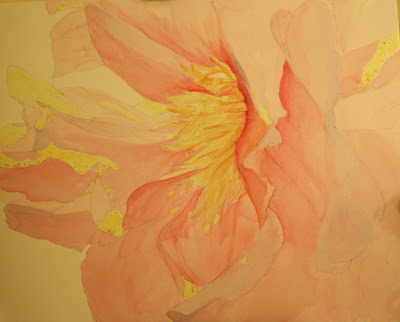 Or a single flower to be precise.

I don't paint flowers.  They've never interested me enough to do so.  I don't like receiving cut flowers either.  I'd prefer they stayed on the plant.  With a greenhouse full of flowers each year, I think I'm immune to their charms.

But occasionally I try my hand at one just to see what happens.  And so this is the beginning of a pink peony. I'm using a 16" x 20" Arches Art board and haven't used one for watercolour yet and have to say that I quite like this surface.  Its hot press, so very smooth and quite forgiving.

I have another fall back piece for drawing when this flower makes me too crazy, but I'll persevere with this for awhile and see what happens.   I know that I *can* paint flowers, but my disinterest in them pushes the appeal to the back burner which is why I rarely paint them.  Funny how we each gravitate to different subjects isn't it?

The initial stages of the painting aren't too appealing yet, but I'll work on more layers and see if it gets past the ugly duckling stage.
3 comments: 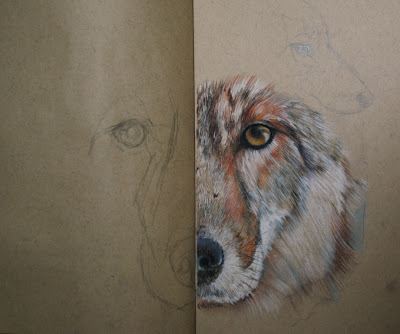 Its funny.  When I have lots of time, I can't get lots of painting done.  When I'm pressed for time, I can. Inspiration is a little low right now and I'm playing around with sketches to see what I want to do next.

Today, the face of a coyote seems to be in my head and needs to come out. I think coyotes are lovely looking animals, but I'm not keen on having them around the farm as they kill a lot of livestock. I did a sketch in pastels to get an idea of whether I wanted to pursue it or not.  I love working out ideas through studies.  I know I go on and on about it, but they are so useful and save time in the long run.  I can work out colours and composition and know some of the problems that may crop up and how to solve them before becoming frustrated with a larger piece.

I think this coyote has possibilities so I'll get a drawing done tonight.  Perhaps some black Canson paper and pastel I think, for a change.
8 comments: 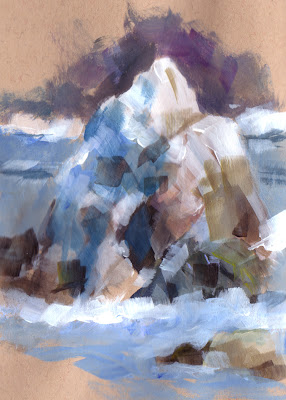 In the one fine day that my holiday seems to have attracted so far, I drove to Salmon Cove Sands to take some photos.  Its a beautiful area, wild and rugged.  The long sandy beach was completely deserted as the park wasn't open for the season yet. 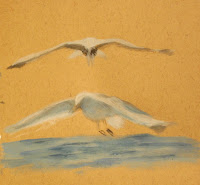 The tide was far out and the breakers were large, rolling in with gulls and terns swirling overhead.  These are a couple of acrylic sketches of the scenes at the beach.  The rocks there are huge monoliths and the scene is like something from another world.  This sketch is of the nearest, smallest rock jutting out of the sand. The larger ones were like islands in their own right.

This is Salmon Cove Sands on a calmer day for the sea.

The art of drawing 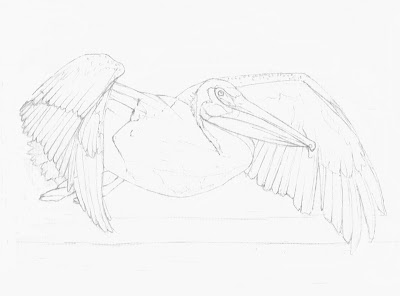 I am of the school of thought that the fundamentals of drawing are essential to all areas of art, whether realism or abstraction. My training was very much dedicated to learning to draw well and to draw daily.  If my drawing was wrong, I had to start over again  and get it right.  I had to begin with basics and work slowly and steadily progressing from simple objects to complex pieces.  At the time, I didn't always want to do the work, but now I know why I had to and can reap the benefits of that training.

In some of the daily painting movement that seems to have taken over, the art of drawing has lost its place.  Society wants instant results and a common problem that I find in people I teach is that they don't want to take time to learn the fundamentals.  They want to get straight on to painting.  As a result, they struggle with the painting, adjusting and readjusting lines and shapes,  not having any structure on which to pin their paint.

Would you build a house without a plan? Start a business with no direction?  So why jump into a painting without the underpinning of a drawing?  The minimizing of drawing skills is cheating the world and artists of a skill and an art form that has been handed down for thousands of years. I have worked hard to develop my skill and continue to work hard to maintain it.  It is  the backbone of every piece of art that I produce.

This pelican drawing was done this morning in a 9 x 12 sketchbook using graphite.  Each drawing is a puzzle to solve in  shapes and should be an essential part of every artist's arsenal of tools.
6 comments: