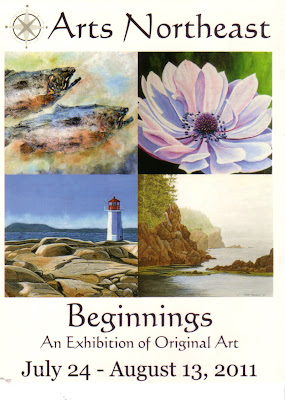 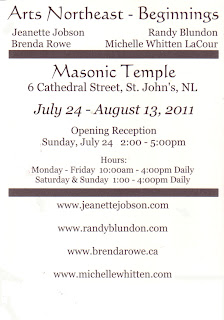 The local art group that was formed earlier this year is holding its first exhibition - Beginnings - in a few weeks.  With time fast approaching, the push is on to finalize pieces for the show and do all the last minute things to make sure things go smoothly.  I have just one more piece to choose and am torn between a couple, one depending on whether or not I want to frame yet another piece.

This summer exhibition and sale, will be held in the historic Masonic Temple, which was built in 1885 and is now designated a Registered Heritage Structure.  It seems I have a penchant for old buildings as my gyotaku workshop was held in the Anna Templeton building, a National Historic site. structure.  Our first exhibition introduces ten original pieces of work from each artist. Subjects range from gyotaku fish prints and seascapes to florals and traditional landscapes with mediums encompassing printmaking, mixed media to watercolours and oils.

The exhibition runs from July 24th to August 13th at Masonic Temple, 6 Cathedral Street, St. John's. It is open from 10am - 4pm weekdays and 1 - 4pm on weekends.

The opening reception with all artists present, will be held from 2 - 5 pm Sunday July 24th.  Come along, we'd love to see you there! 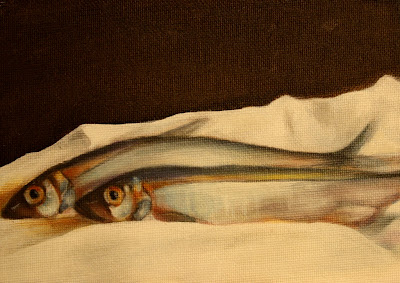 Capelin Weather
5 x 7  acrylic
I spent some more time with the capelin piece again today to finish it.  I had taken some photos, but the light wasn't right in them and as I had started from life I wanted to complete it that way.

Whether painting from life or from photographic references, as long as the lighting is good, the painting will usually follow through technically.  I know there is a school of thought that believes only drawing from life is the classic technique and photos cause problems.  To me, there are issues with both.  Practicality for me when using fish or a water scene comes into play. Working a full time day job means that I can't always access the lighting that I need or have the time to devote on site. I can do a lot from life studies, but time and availability makes painting completely from life often a luxury rather than the norm.

Use of both provides me with the best of both worlds.  I can have the reality check and knowledge of colour and light that stays with beyond the boundaries of the reference photos that I take on site or of the specimens.  I think familiarity with a subject gives the best grounding for a good painting and that familiarity is often found through studying the subject in life.

These little fishy friends are available for sale in my Etsy store.
4 comments: 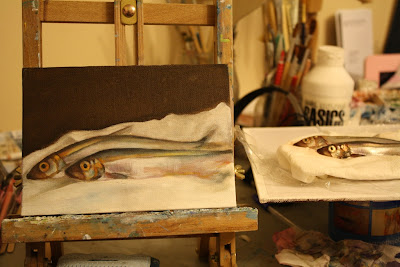 Its capelin season in Newfoundland.  That time of year when the little silvery fish roll in on the beaches to spawn.  I was given a bucketful of them and they are my favourite fish to draw and paint and print.  I love their delicateness; the sheen of their skin and the myriad of colours that show up in them.

So while the coyote is still watching me from across the studio, I grabbed a couple of fresh capelin and took some time to make a start on a little painting.  I'm painting these from life, the 'shelf time' is limited.  I'm done for tonight and will finish it off tomorrow, then these little ones will have fulfilled their mission in life.

This is 5 x 7 acrylic on canvas board.

And a little up close and personal view of caplin rolling on the beach yesterday.  I sure hope the camera was waterproof... 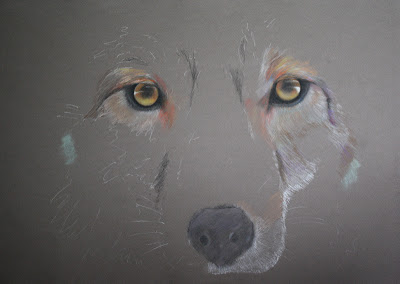 I've decided to do the larger version of the coyote study that I sketched a few days ago.  This is on a half sheet of mouse grey mi-tientes paper - the smooth side.  I'm using pastels for a change - a combination of sticks for initial broad values and pencils for detail.

As usual, I start with the eyes.  If the gaze looks right, the rest will generally fall into place around it.  I know I should be disciplined and work left to right for this, but I'm all over the place, adding shape and colour as it suits me.  It will all work out in the end provided I keep remembering to use my hand shield.
11 comments: 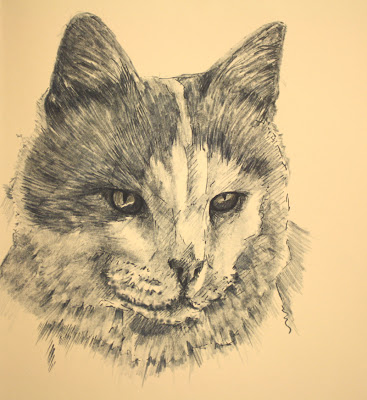 Tripod sketch
felt tip pen
I have two new studio companions - Jack and Vera - a couple of young parrakeets or budgies.  I haven't had birds for a very long time and at one point I used to breed birds of all sorts and had many from parrots down to finches. 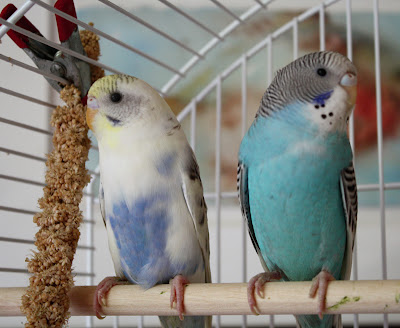 There is an uneasy alliance between Tripod and the birds.  He's curious and stares at them, but knows that he's not allowed to get close and he's at the point now where he can be left alone in the room with them and he simply goes to sleep in his bed and ignores them.   I wouldn't trust him alone while no one was in the house at this point, but he's getting there.


Birds in the barn are another story where cats are concerned.  Yesterday morning 70 day old turkeys were picked up and yesterday afternoon a black cat that keeps coming by decided they'd be good fare and killed 20 of them.  Needless to say, no one is very pleased.   This cat has been wandering around for the past year or more and he and Tripod have ongoing wars.  He keeps going into the barn and even eats the duck feed out of their bowl.  Usually mass killing like that is the signature of a mink or weasel, but there was none in the barn and if one were in hiding, the rest of the poults would have been killed by morning but none were. 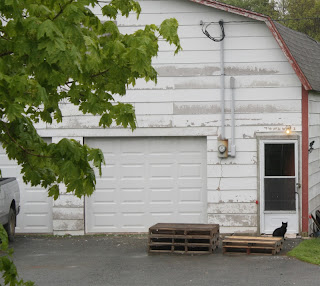 The black cat turned up again this morning, sitting by the barn door waiting to go in and finish off some more poults. Trap for removal or shotgun is next in its fate.  I'm an animal lover, but when they cause financial loss and livestock suffering, I am very happy to remove the intruder in one way or another. Straying animals, whether pets or abandoned, cause major problems in farming at many levels.
8 comments: