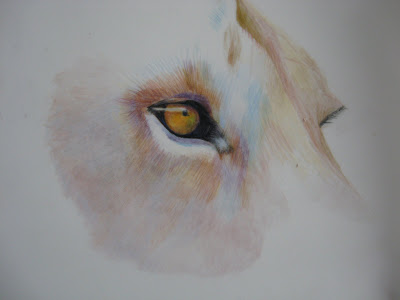 Lioness study
4 x 4 coloured pencil on mylar
copyright Jeanette Jobson
Over the last few days I've been trying to make a decision about which pieces I will put in an upcoming show on October 21st. I can put in four pieces, and feel that I should, as I want to get as much exposure as I can for my work and subject matter. But deciding just which ones is always the challenge. I have narrowed down my decision to a firm one for two of my pieces and am considering my options for the other two. 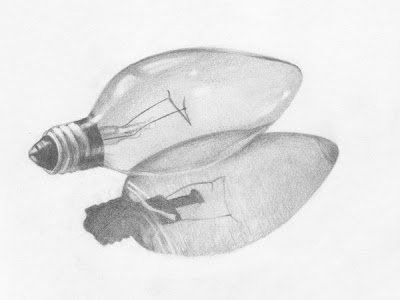 Lightbulb
9 x 12 graphite
Copyright Jeanette Jobson
"It's the night that makes the dawning.
It's the depths that make the heights.
It's the roots that make the branches.
It's the darkness that gives birth to Light."
-- Joel Heathcote (The Architect of Light")

Its difficult to fit in drawing when there is a young child around, in fact, its near impossible. It makes me wonder how I did it when my children were tiny. I did draw then but usually only when they had gone to bed for the night or in snatched moments during naps when I wasn't too tired myself to get on with it.

I guess I know now why people have children when they are young. The energy levels are so much higher. I was up at 3:15 last night feeding the baby. It wasn't a long process before she got back to sleep, but disruptive enough to disturb my sleep pattern and make me now wish for my own bed at 10pm 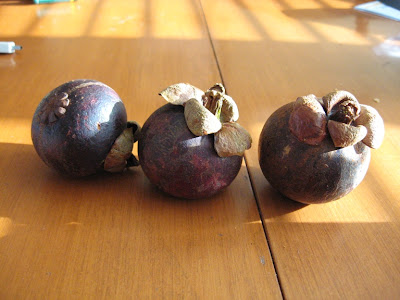 Some mangosteens were purchased the other day, more because of their shape and colour as potential drawings than to eat. I've never seen them before or tasted them but according to my research they are THE taste sensation in tropical fruit. These are past their best buy date I think and remind me of carved wooden spheres, quite fascinating. One was prised open and that in itself is a challenge as the rind is very thick and hard. The inside was segmented like a tangerine and quite perfect, but a little over ripe. Then again, I haven't had the experience of eating it before to judge by.

Apparently they were banned from entering the USA for a long time due to the potential of harbouring the Asian fruit fly which was feared would damage crops on this side of the Atlantic. That ban has now been lifted and they are once more permitted into the country. The latest price for these little fruits? $45 - $60 per pound in New York. The price for 9 of these fruits in Newfoundland? (albeit well past perfection) .49 cents on the bargain rack in the fruit and veg section. Regularly $8.99 a pound. Perhaps New Yorkers would like to stock up if they're here...

Weighed down with a turkey dinner and between the baby squealing and my mother chattering, I watched a fascinating documentary on television tonight called 'The Alma Drawings'. This woman claimed that 'The Hand' directed her complex, unique pen and ink drawings and colourful, complex images. Whether outside intervention or psychotic wanderings, the end result was stunning. You can find some of her drawings here.

Alma Kate Rumball (1902�1980) was born in Huntsville, Ontario, Canada in 1902. Alma's career began as a school teacher, but that career lasted only four years. Although she had no formal art education, artistic talent ran through both sides of Alma's family; in fact her maternal grandfather, William Morgan, was one of five runners-up in the design of what became the Eiffel Tower. When she became ill as a young woman, she was sent to a tuberculosis sanatorium for four months. She was deeply affected by the experience. She lived in Toronto for a while but after her vision during the 1950's she returned to Huntville. She became reclusive and unsociable and withdrew from life.

Alma's automatic painting began in 1955, after she experienced a "vision" of Jesus, accompanied by a panther. During this event she felt commanded by Jesus to draw and write in order to help "heal humanity". From that time, her hand began to move spontaneously across pages, in swirls and detailed formations, totally unlike anything she had consciously created before. She filled up every available space on paper provided for her by her family, claiming no ownership for the work. She took no credit for the process, saying, "I'm as excited to see what 'the hand' will do as anyone else is".

There was no trance state involved, she simply allowed the creations to come through her. She never claimed to understand the process, she simply marveled at the wonder of her gift. She devoted her lifetime to these drawings and writings. Her work is reminiscent of the theme of Carl Jung's Collective Unconscious as it is viewed.