The airline has just called me to say that tomorrow morning's flight has been cancelled due to 'impending weather'. Yes it snowed a little, but its now turned to rain and should be warmer still by morning. So now I have to wait til Sunday morning - a 6am flight which means I will need to be at the airport by 4am as there will be a lot of people if flights have been cancelled. Which means I will have to get up at 3am. Travel is bad enough at the best of times. It is more so when delays happen. At least I can relax a little now and stop running around quite so frantically trying to get last minute things done.

I need to be a bird and be independently able to travel at will. This little cockatiel was a little watercolour that started as a sketch. Of course on the wrong type of paper to accept water so it buckled and never regained shape, but I still rather like its form and soft colours. Years ago I used to breed these birds along with several other kinds. They were quite beautiful and good natured. I had considered starting again with some new birds, but just haven't gotten around to it.
4 comments: 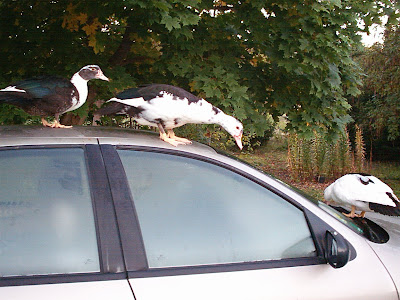 When the Muscovy ducks were young they were light enough to fly,, especially the females, and they tended to be attracted to cars. That wasn't a good thing. Muscovy ducks have substantial claws and are fairly large birds, so they can scratch a car. As soon as someone would drive up for eggs, the 'girls' would make a beeline for their car and hop up there to see if there were any interesting bugs to eat. Most people would laugh at them but a few were car proud enough to get annoyed so the ducks were banished from getting onto cars. But often when my back was turned, they tested my patience again. Like here.
1 comment: 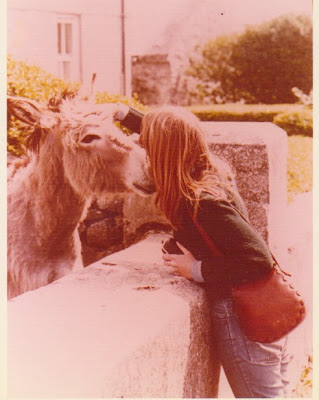 I discovered several things this week that don't please me. The latest involved the drawing that I uploaded last night in the previous post. It being pastel and prone to shedding its pigment everywhere, I decided I would give it a quick spray of fixative to ensure that it stayed put.

I don't know if it was the paper or the type of pastel but I sprayed it and the colour faded and darkened to a mere shadow of itself! So I've spent some of tonight reapplying pastel to the paper. It doesn't look quite the same however and I wish I had known that fixative would have this effect. I guess because the surface is so rough there was probably little chance of the pastel coming off too much, but old habits die hard. I've learned a lesson.

The other learning experience is that of understanding people. Or not understanding them. There are reasonable people in the world and then there are unreasonable who you cannot get through to no matter how hard you try. I come across both in work and in my personal life and neither cease to amaze and both can make me soar or sink.

I think its why I prefer animals in many cases. This photo was taken on Inishmore, the largest of the Aran Islands which are off the west coast of Ireland and was taken in about 1975. I stayed on the island for about 3 days. The donkey was friendly and reasonable.
2 comments: 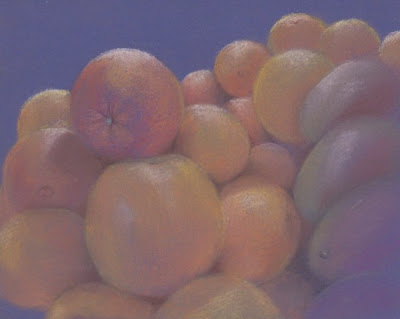 I received a piece of colorfix paper in this intense deep blue and I wondered for a few days what to draw on it. The paper has this fine sandpaper-like texture that I can't resist running my fingers over. I cut the paper into quarters and one quarter into further quarters to experiment on.

The paper was originally produced for pastel but I've also seen it used with coloured pencil. I tried both. The coloured pencil experiments were ok, but I didn't do more than play really. Then the pastels and pastel pencils came out. This image was in the weekend drawing event at WetCanvas and the colours were perfect - blue being a complementary colour for orange and it jsut seems to flow from there.

The paper has an amazing feel when drawing. I love the texture and sound it makes when pastel is drawn across it. It also gives that orange peel texture for the fruit as well as being able to blend it to a smoother skin for the mangoes on the right.

Now I just need to track down a package of colorfix and stockpile it as I can't find it anywhere in Canada.
2 comments: 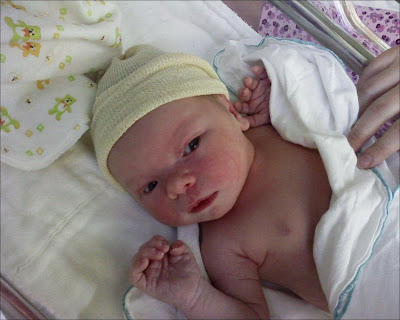 After keeping me waiting for awhile, my first grand daughter has finally arrived.

Welcome to the world.

When a child is born, so are grandmothers. ~Judith Levy
5 comments: