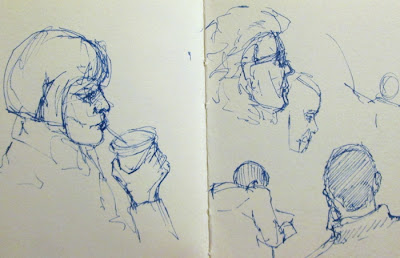 I love watching the interaction of people with the world around them. While uniquely individual, they are all the same in terms of repetitive motion.  That's what makes sketching in public easier for me

People change position, move around, walk, bend, eat, drink and I put down a few lines here and there then wait til they resume the position again, which they invariably do.   I move from person to person with a line here and there then back again and hope they don't leave the scene entirely before I'm done.  I like to test myself with just how much information I can get down in a very short time frame. 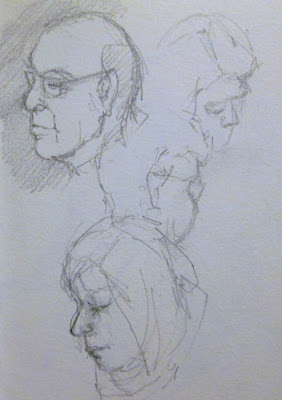 While waiting today, I sketched heads of others.  I find most people that I sketch are engrossed in their own activities and rarely aware or interested in what I'm doing. The lead in my mechanical pencil gave up the ghost mid sketch and all I could find today was a ballpoint pen in my bag to sketch with, but it fits the bill to capture lines.  I think the next challenge will have to be about unusual tools for drawing.  Toothpicks, twigs, etc. etc.  Never be afraid that your sketchbook is too precious or your drawing not perfect enough.   Each line is a moment in history.  Your history. 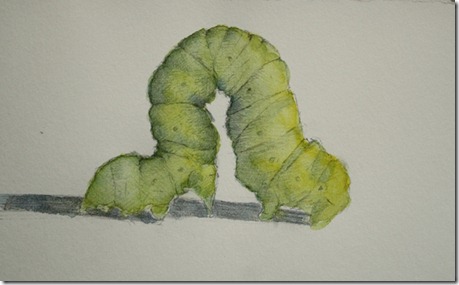 Those who know me know I don’t tolerate insects well.  I’ve been known to sleep in other rooms if a moth invades.  Wasps and bees freak me out and I loathe spiders and barely tolerate earthworms. Even butterflies are just colourful moths to me and I don’t want them anywhere near me.

Inchworms?  Well they’re a little different.  They’re tiny, or at least the ones I knew were, and a lovely chartreuse colour. I remember playing games with them with I was a child, watching them pull up their centres and stretch out again to move ahead.  I loved seeing their strength as they extended their tiny bodies to test for the next landing point, waving gently back and forth

Who remembers this song and your own adventures with inchworms?

A couple of years ago, several dozen seagulls in St. John’s met their untimely end due to ingestion of coffee grounds.  Seagulls seem to populate every part of town and are voracious eaters, tackling any garbage bag they see and I imagine there are coffee grounds in many bags, especially if they find one from a local coffee shop.

The expression on this bird seems a little surprised. Its that wide-eyed look, a little frantic and undertone of calm supporting it, verging on the edge of wanting to go back for more, but feeling that he shouldn’t.

I love gulls, crazy, pugnacious and greedy as they are.  Drawing this one was very enjoyable.  This is day seven of my March Sketch a Day project.   Each day sharing a sketch with you on a blog page devoted to just that.  You can take part too and add your sketch during March.  Doesn't matter if its each day or only one, its all about the drawing practice!

Talking about aggressive, take a minute to watch the video below of a very bold seagull who swiped a woman’s camera in San Francisco while she was filming the sunset.

The camera was still filming and the gull eventually relinquished it in another spot after determining it wasn’t edible.  The gull-eye view footage, including the thief’s getaway, was included. 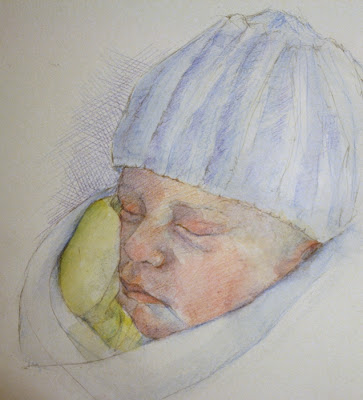 On February 24th, my eldest daughter had her first child, a boy.  I'm looking forward to meeting him for the first time in early April, but until then I have to be content with virtual visits and photographs.

This is the first sketch of my new grandson and I'm sure there will be many more to come.
8 comments: 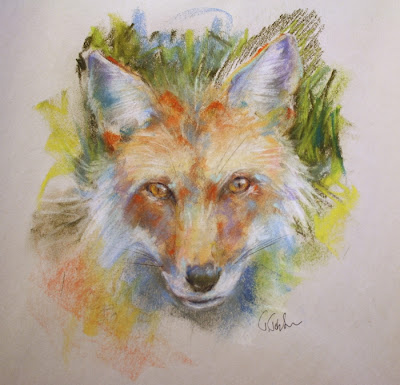 Reynard the Fox was a medieval European trickster figure, a nasty but charismatic character who was always in trouble but always able to talk his way out of any retribution.

I'm not so sure whether this fellow is quite so willing to talk his way out of trouble.  He lies in wait in the grasses at the edge of the meadow, hidden enough from view but with full view of his surroundings.

Foxes have very cat-like features I think and quite delicate faces, legs and feet.  I've had quite a few encounters with them on the farm and just the other morning saw a silver fox race across the road as I left for work.  Red foxes are much more commonly seen so the silver one was a treat. 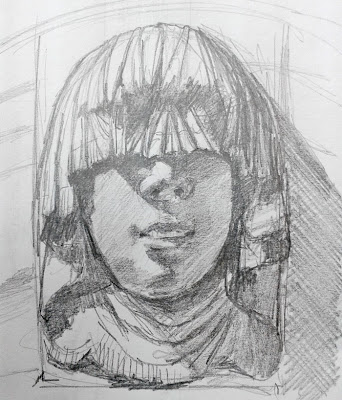 Drawing casts is a traditional method of learning to draw form.  All kinds of sculpture is used to draw from and good lighting helps the artist create the play of light and dark that gives the piece shape.

This is a form of gargoyle found on many buildings, little heads with various expressions that populate churches, cathedrals and buildings of importance.

This is a quick sketch done at lunch today that will be turned into a drawing.  I have vowed to produce several complete drawings this year and this will be one of them.  I think I hear charcoal calling for this one...
2 comments: 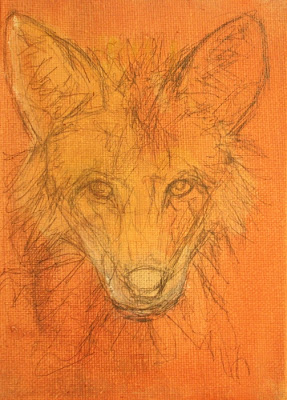 Living in the country, there's always animals around.  Some wanted, some not so wanted.

Foxes are elegant opportunists.  They watch unseen from the woods and lurk on the edge of the field, waiting for a moment to grab a chicken or duck that's wandered too far or if very bold, they venture into the barn to see what's available.

Although I don't like it if they do kill one of the birds, I also have a degree of sympathy for them, as I know they're simply looking for a meal to feed themselves or a den of kits.

This sketch is the start of a small oil painting of Monsieur Reynard.  Drawing is the backbone of art and the need to draw and sketch daily pushes me to keep those hard earned skills intact.

You can add your sketch for one or all days in March on my March Sketch a Day page.  Simply add your name, blog post url and image to the Add my Link button on that page.
1 comment: 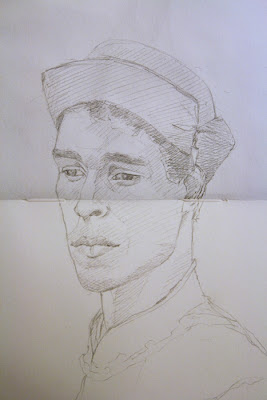 The classic lines in this fellow's face appealed to me and it may be worth expanding into a portrait.  For now, just a sketch.
No comments: