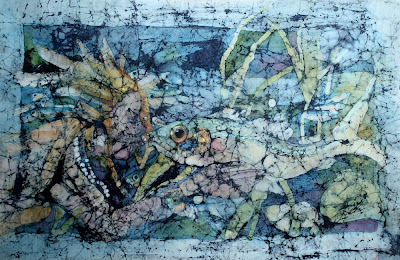 Everything is a learning experience and its good to go outside your comfort zone and just let creativity flow.  I found that doing this batik on paper hit all areas.   The original sketch was done from an idea in my head, no references, just thoughts flowing.   I decided that I'd try my hand at batik using hot wax on paper instead of the faux batik that I'd used previously. 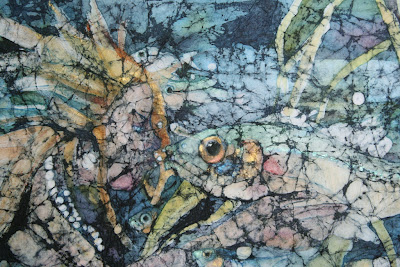 The build up from the drawing transfer, applying layers of wax over pigment had me doubting that the mess in front of me would ever turn into something salvageable.  The final layers of wax over the entire piece after I had cracked the wax and applied a dark indigo wash to seep in the fissures really left me thinking this was only fit for the trash can.  I didn't take a photo of it at that stage and should have as it really was not a pretty sight.

However, I made my batik sandwich of white paper and newsprint and ironed it to soak the wax out of the piece.  When I changed newspapers to blot more wax, the transformation was appearing.  This is the final piece.  It will need some more tweaks and there are some things that I will  be careful of in future batik work. 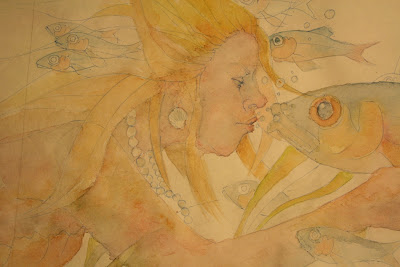 I've enlarged my drawing and put it on a piece of Japanese paper - I can't remember what kind it is right now.  It was a piece left in a pile and not labelled so I'll have to hunt to figure out the type of paper it is.  The piece is about 10 x 15. 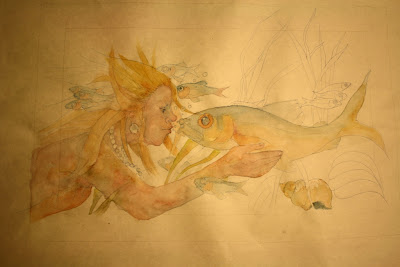 I've decided to try a batik piece with it, using wax and watercolour.   I've done faux batik before using masa paper and that turns out well.  Now armed with and old griddle, a tiny cast iron pan and a chunk of beeswax that I had (it smells sooooo good), I'm off to the races. 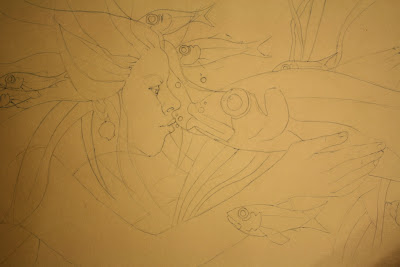 Well races doesn't really sum it up, as batik is a slow process and I don't even know if I'm doing it correctly or not yet.  Basically, its a bit like using masking fluid, adding it layer by layer over areas that you want to save as you add progressively darker layers.

Its early stages yet and I have some initial layers in place that I've put pigment washes on and have now added a layer of beeswax over that to preserve it before my next layer of paint.
7 comments:

I've been doodling the idea for a new painting over the last few days and think I've more or less got what I want. You'll need to click on the image to see a better view of it.  Now I need to enlarge it, then decide what the medium will be.

Creating a new piece from a variety of sources, reference images, life and imagination test ability and creativity.  I'm not a graphic designer or illustrator and envy their ability to come up with what seems like endless ideas for images.  Mine take blood, sweat and tears from start to finish usually.

Elements may change as the piece transfers and as it is painted, but the concept will remain the same.
Now on to the painful part - enlarging.  I like the process of creating, but sometimes want to speed up the boring parts!
6 comments:

Can you hear me now? 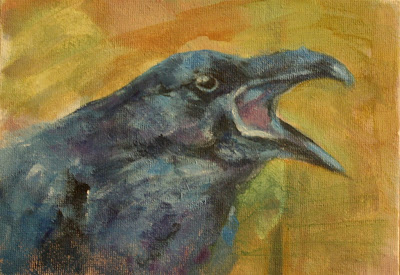 It really really is the end of the palette now and I'm ready to move on to a new piece.  If only I can decide which one and in what medium.  Sometimes there are just too many choice to make a decision and then nothing happens!

So to finally finish off the remains of the paint on the palette, I did a quick 20 minute study of this crow who is obviously trying to tell me something.  Probably something along the lines of  'Just get on and do it!'  Setting time limits works well to free up brush strokes and decision making in painting otherwise I can get swept up into detail and fiddly changes.
5 comments: 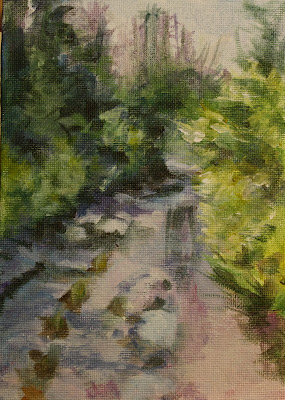 This view is very near my house and I've painted it several times over the last couple of years.  The track leads into the woods to a marsh and not much goes there beyond all terrrain vehicles or snowmobiles in winter.  There is no lavender growing there. The path is usually filled with water as it is a wetland, but with the warm weather over the last week or so, its dried up a lot, so its down to pale lavender/grey earth with a few puddles remaining.  The colour is what attracted me this time and I enhanced it a little above the natural colour in my paints.  Its part of the appeal of being an artist.  I can turn reality into fantasy or vice versa by simple use of colour.

I don't know why this little track fascinates me so much.  I find myself looking up it each day as I pass it, noting changes in the landscape, sky or path and take mental notes on colour and shape.  I often stop to grab a quick shot with my cellphone camera if I want to capture a particular light.

There is benefit in revisiting the same spot and  painting it over and over.  Each time, there is something new to learn.  I was using up the end paint on my palette to create this piece.  I hate throwing away paint and always create something out the the remains of colour left from creating other pieces.
2 comments: