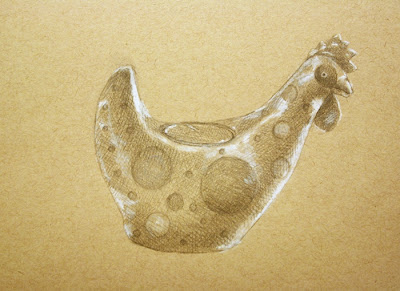 I have this cute ceramic tea light holder that my daughter gave me.  Its in the shape of a hen with dots of colour all over it.  It always reminds me of spring.

Here's my version of it in graphite and white pastel on toned paper.
No comments: 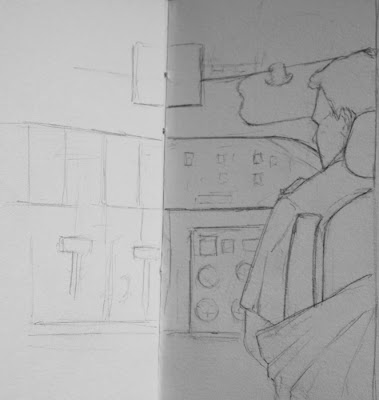 I don't particularly enjoy flying.  Its tedious and I like to be the driver, not the passenger, when it comes to take off and landing or at least see where I'm going.

I was in Ottawa for a few days and on the way back today, there was a stopover  in Halifax.  I wasn't allowed to leave the plane and had been given a premium seat with a view direct into the cockpit.  All those buttons and gages...mind boggling and rather different from driving a car.

So between people coming and going in the limited time the door to the cockpit was open, I did a quick sketch of the co-pilot and part of his working environment.  If you think seats are tight on airplanes, these guys don't have it any easier I thought as I watched the pilot literally vault into his seat using an above head hand grip for guidance.  No way to do that gracefully, either in or out.

Just two more days left in the March Sketch a Day project!  Thanks so much to the artists who participated, it was great to see you join in and the diverse range of work that was produced.  I'll do a little synopsis of my thoughts on the whole project on April 1st. 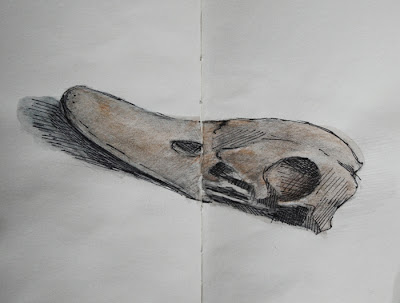 When I had ducks they had the freedom of the farm to wander and some would be adventurous and explore the meadow or the vegetable field, sometimes venturing to the edge of the woods.

Now we all know that its dangerous to go into the woods don't we?  Or so we tell our children.  Those fairytales of big bad wolf, trolls and goblins were all designed to prevent children wandering off, getting lost or getting eaten by something!

Unfortunately the little Khaki Campbell ducks were disobedient children and did go to the edge of the woods.  Where a fox was waiting.

This was a duck skull which I found in the woods, near where several disappeared.  The only good thing out of this is that I have a skull to draw from and they can be difficult to find.  If you've never drawn part of the skeletal structure of an animal or person, I strongly recommend it.  You learn so much about anatomy and how the body moves from it.
1 comment: 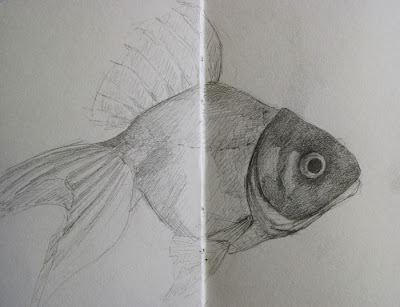 I think many people have had a goldfish as a pet at one time or other in their life and there's usually a story to go along with how it came home with you.


As a child I never had a goldfish, and never recall seeing them for sale or as prizes at a fair - not that there were any fairs here in Newfoundland then, just the Regatta in the summer.   So I think I made up for it by gathering up fish of all kinds later in life.

I used to have many, many fish at one point, both cold water goldfish, koi and tropical fish as well.  The goldfish mostly lived in a little pond in the garden but a few that were more exotic were always the inside pets.

I have no fish right now, but feel the need for a few live models arising. There is nothing better than watching them move and seeing the light reflect on the gold and orange scales.

Its time to get another goldfish I believe.
No comments: 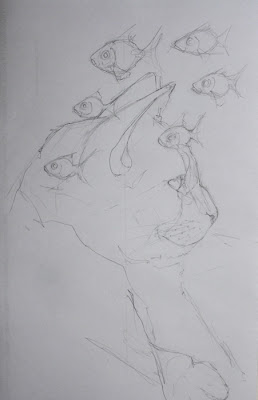 Sketches, while part of my March Sketch a Day project, often are the first step in the process of creating a piece of art.  From the gelling of an idea, to a rough thumbnail, then a more detailed sketch and finally transformation into something more solid.

This sketch was an original idea which turned into the relief print shown below.  There was a lot of transformation, cutting, altering, errors, corrections and swearing while it went through its metamorphosis, but it emerged on the other side and is now available as an open edition print through my website and  Daily Paintworks.

I use several different types of Japanese paper to print with as I love their ability to take up the ink crisply and dry quickly.  I use oil based inks for printing and find they produce a much more defined piece compared to water-based inks.  I do use water-soluable inks as they're easier to clean up, but am trying some Daniel Smith oil based inks and quite like how they perform too.  The clean up is rather messier so I'll be doing longer printing sessions when I use these I think. 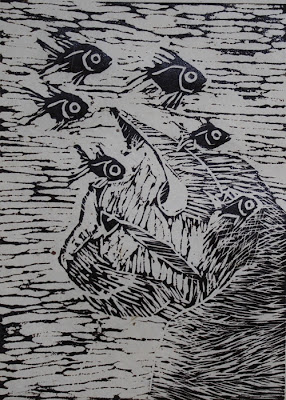 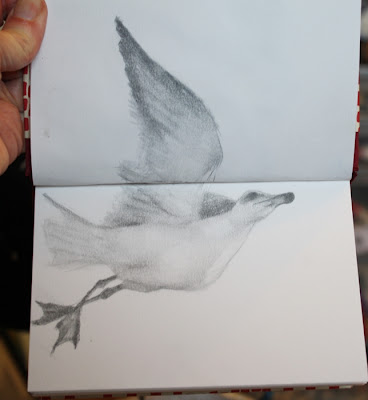 As I write this it is dark and I can hear the foghorn's low tone on the headland.  The seagulls have settled in for the night, no more flights til morning. No more soaring on the air currents. Tonight they are grounded to the lonely beaches, cliff ledges and shoreline until dawn releases them again. 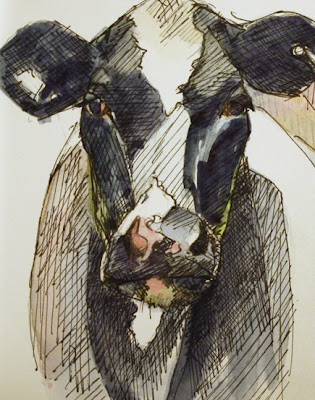 Who remembers this game from childhood?  In England, the game is either called "Grandmother's Footsteps" and sometimes "Statues" where the person who is "it" turns to make sure that the players are not moving if they hear movement, or it's called "Mr Wolf's Dinnertime", where "Mr Wolf" has to try and catch anyone moving - if "Mr Wolf" cries 'dinnertime' then s/he has to race everyone back to the start line, trying to catch as much 'dinner' as possible.

So what's the connection between a game and a cow?  Its back to the farm in Somerset again.   It was a dairy farm and I rented a cottage on the farm smack dab in the middle between acres of cow fields and hay barns.  As a result, there were lots of cows around and close to the house...sometimes too close.

When the heifers (young cows) were in the field and I had to cross it for whatever reason, they would, as a large group, follow me, presumably thinking I either had food or were taking them somewhere.  They would tramp along behind me, running to catch up and I could hear their heavy breath and loud footsteps. It was like being followed by an army! I often wondered if I'd get trampled in the herd.   However, if I turned to face them, they'd all freeze, mid stride, as a group and wouldn't move a muscle until I turned to walk again.  It became a bit of a game with them at times seeing how many times they'd stop before I got to the fence and scrambled over, leaving them looking a bit perplexed.

I have to admit I felt a bit uncomfortable with them all behind me at times, as they'd get closer and braver as we got nearer the fence.
7 comments: