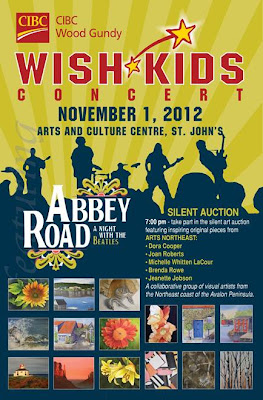 Arts Northeast, the art group that I involved with, has partnered with the Children's Wish Foundation NL Chapter in one of their annual charity events - the CIBC Wood Gundy Wish Kids Concert. I will have a nine original paintings available in a Silent Auction.   There is a concert as part of the fundraiser, but anyone can attend the auction, independent of the concert if they wish.   The event will take place at the Arts and Culture Centre in St. John's and the silent auction begins at 7pm with the concert at 8pm.

This is one of my pieces that will be available, The Burn, an oil painting, as well as many others from the members of Arts Northeast.  Please share the information and come along to support a charity that does such heartwarming work.
2 comments: 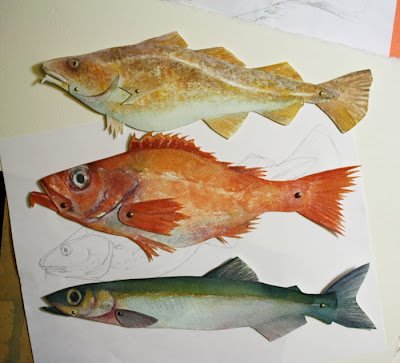 I never can seem to stay away from fish for long, can I?

Its funny how one idea triggers another and on and on it goes til you're far down another rabbit hole discovering something new.

As a child I spent hours, no, more like days at a time, creating little worlds out of cardboard and empty boxes.  Theatres, complete with backdrops, changes of scenery, and populated by character of all kinds who I would then make up stories for.   I don't think that part of me has ever really left.  There is something satisfying about working on detailed pieces, complete with movement that brings me back to childhood.  Scissors, paint and paper fasteners all whisk the years away.

Articulated figures have been around for a long time and are the basis for a common 'jumping jack' which dates back to Egyptian times, that is often seen at Christmas - an articulated figure usually operated by pulling a string to make his arms and legs flail up and down.   I don't know which rabbit hole opened up this thought path again, but it did open and I wondered if it would translate to fish. 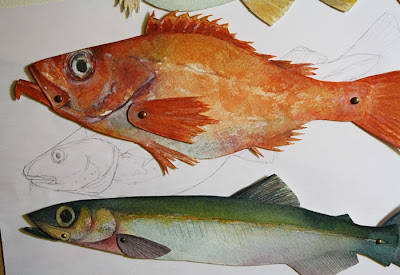 These three local fish are a prototype that have possibilities as something more substantial, or perhaps as a unique card or a traditional print sheet that could be downloaded, cut out and put together.  None are true to size but all are similar in length of about 10 or 12 inches.   They were sketched on paper first then transferred to 200lb watercolour paper.  A heavyweight paper is required to be substantial enough to allow piecing by the miniature paper fasteners (or brads as they seem to be called these days - do you know paper fasteners are banned in some places?)  Movement is at the bottom jaw, pectoral fin and tail of each fish. Watercolour washes created the form and colour and some additions of pen were added.

I'll be working on more varieties of local fish/shellfish and looking at other options for use.  Meanwhile I'd love to hear your thoughts on them and if you think they'd fly - or in this case swim - as a product line.
7 comments: