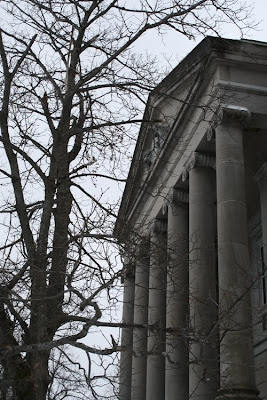 Even with snow squalls and a bitter wind,, I stopped to take some photos today.  I switched over to a 'real' camera a couple of months ago and wished I'd had a long time ago as there's much more possibilities with it.

It was overcast today even though glimpses of blue sky appeared now and then, they didn't last for long.  I stopped at the Colonial Building in St. John's as the columns caught my eye.  The brief shot of sunshine didn't last long enough to capture the shadows the columns threw, but I decided to go for it anyway.  Even though the image is shot with colour, it still comes out as shades of grey with the weather and the building setting the values.

The Colonial Building was created to be the seat of Legislature in Newfoundland and was constructed from 1846 - 1848, complete with its own time capsule buried under the cornerstone of the building.   It's facade was constructed of imported white Irish limestone and is neoclassical in design, with six ionic columns, and a pediment sculpted with the Royal Coat of Arms.

The painted ceilings of the building were painted in 1880 by a Polish fresco painter named Alexander Pindikowski. Mr. Pindikowski had come to Newfoundland to teach art in the community of Heart's Content. However, he became a famous character in Newfoundland history, not through his teaching, but rather through his arrest for attempting to cash forged cheques.  After being arrested for his crimes in March 1880, Mr Pindikowski was sentenced to 15 months in the Penitentiary. 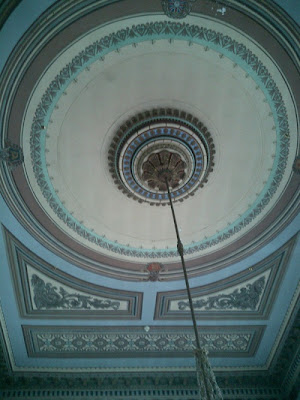 The government were aware of his skill at painting frescoes and had him put to work during the days of his sentencing to complete the painting.  Even after his work as a painter, his sentence was only reduced by a month.

There were nine different colours used in the original ceiling work, and an inlay of 200 books of gold leaf. Pindikowski's work was carefully restored in 1940 by a local painter named Clem Murphy. Current restoration work is planned for the building which is anticipated to finish in 2013.

Meanwhile I continue on with the crow, but not a lot of progress today.  More tomorrow I hope.  It seems my weekends are as busy as my weekdays.  Sometimes my body and mind just shut down and make me nap on the sofa by the fire.

I have tried  putting a a couple of pieces of art on Ebay, besides the Purity Kisses prints, which seem to becoming more popular. You can click here to view and bid.
4 comments: 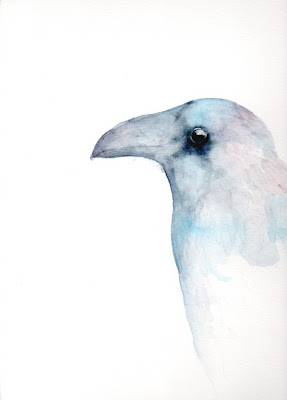 I've started this watercolour of a crow and its in the early stages, where I've laid down some colour and am starting to go back into the first washes to define shapes and values.  There are so many colours in what is initially seen as a 'black' bird. Purples, reds, blues and browns all come into the plummage to give the illusion of black.  Even in the darkest areas of this piece so far, such as the eye area, contains no black.  It consists of nothing more than indigo, prussian blue and a touch of payne's grey.

Its not a large piece - about 9 x 12 and may be the start of several in the corvid family of birds.
I have a fixation with the corvidae genus of birds.  The common English name used is corvids (more technically) or the crow family (more informally), and there are over 120 species. The genus Corvus, including the crows and ravens, makes up over a third of the entire family. I think they are the most amazing, intelligent birds on the planet.  They have become the early warning system for predators here on the farm and we feed them mice that are caught or occasional dead chicks.  Its a bit like paying for mafia protection but without the threats.  Of course if eggs are out in the open such as in the duck pen this summer, crows think they are fair game and swoop in to take them.
Crows have an inbuilt dislike for owls as was seen a few months ago when a great horned owl killed several ducks in the summer pen in the meadow.  The crows were my early alarm system that something wasn't right that morning and they continued to join forces and dive at the owl, eventually driving him into the trees.
Here are a few crow facts:
13 comments: 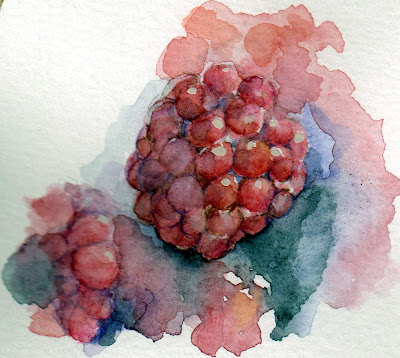 When in between projects, I still keep my hand in and draw and paint daily.  They are usually small pieces in a sketchbook of something that captures my interest in terms of lighting or form. Or it may be an idea for a future piece.  While looking for inspiration some raspberries that caught my eye.  The fresh colour reminds me of warmer weather and I adore raspberries to eat, so before I knew what happened, they appeared on the scrap of paper beside me.

Whatever the time frame, I know that I need to and have to draw and paint to ensure I stay focused. I need to spend time creating, as no serious artist has ever made a mark by just thinking or reading about art.  So whether its 10, 15 or 20 minutes a day, 3 hours or a whole weekend, I know that I need to make that time to enable me to achieve my goals.

Its so easy to sit on the sofa and nap or watch mindless television if its on or get pulled into non essential events and put off what I need to do.  I only end up frustrated if I do because I'm behind in the creation process and have only myself to blame.   Art makes you selfish and it should.  Everyone who wants to be an artist needs to take that side of their life seriously and make sacrifices and time for it. 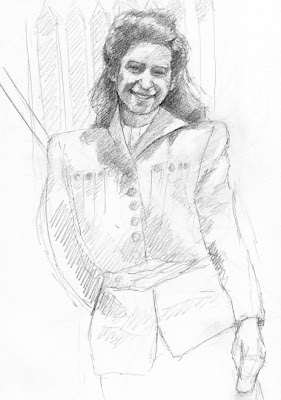 I started a portrait of my mother a few weeks ago and it still needs more work on it.  Last night I was looking through a cupboard and came across an old photo album that I had rescued from my mother's house with plans to scan and catalogue the photos.  In it were photos of my mother when she was perhaps 17 or 18.  The thought crossed my mind that perhaps a ghost of her image at that stage in life might be interesting to have in the current drawing.  I did a value sketch of one of the images and will work out size and composition potential in the current drawing before I commit to anything.
12 comments: 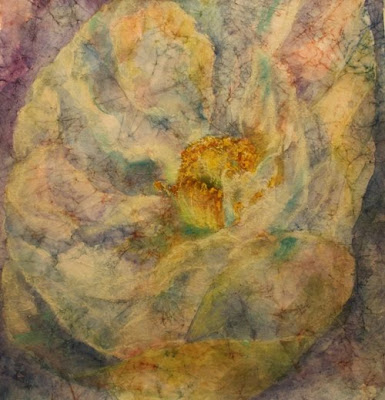 I'm calling my experiment with the poppy over for now and moving on to planning some new pieces.  That is after I finish up what's on my plate right now.  I act as if I have A.D.D. at times, jumping from one piece to another, but ideas just have to be put on paper as soon as they gel and other pieces will always wait. 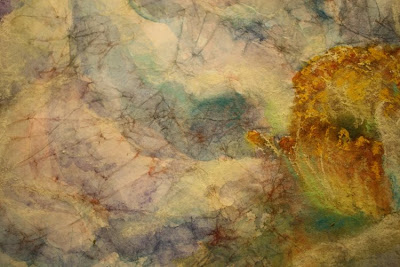 I wasn't thrilled with the colours in the poppy.  I felt it didn't have enough definition and still isn't going quite where I want it to.  I added some touches of pastel to bring back some lighter sections that I lost.  I was anxious to experiment with the concept of this paper and didn't plan my drawing well enough.  The next one will have a roadmap attached to preserve the whites better.

However, I love the veining that the process creates in the masa paper and the potential for experimenting. I wish I hadn't rushed the piece but there is always next time and lessons learned.  Isn't that what its all about?
7 comments: 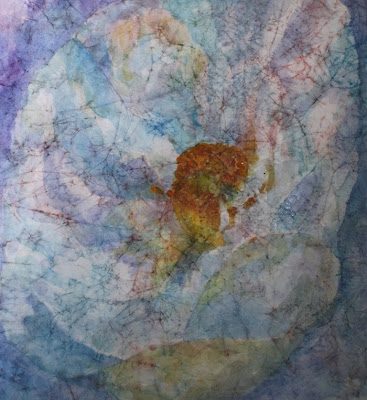 I've slowly added more layers to this poppy and am not sure if I like it or not.  I think its getting overpowered by blues and may be schedule for a do-over. But I'll continue on for awhile yet and see what definition I can pull out of it.

The piece is 19.5 x 21 inches so fairly square and looks much better in real life and from a distance.  Its one of my bug bears about displaying pieces of art on a computer screen.  They tend to be closer views of a piece which never shows it at its best.  Yes, we all peer at close range hoping to see the secrets of the art universe unearthed in a brushstroke, but in reality, standing back to view you get the true effect of a piece.
2 comments: