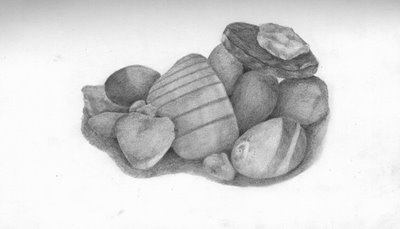 People are always so boring when they band together. You have to be alone to develop all the idiosyncrasies that make a person interesting.

I need solitude to draw or paint. I need to be in a room by myself, preferably a house by myself. Interruptions are frustrating and annoying and make me lose my train of thought or come out of that lovely place that I've escaped to where the rest of the world disappears and just what I am creating is in my mind. It is almost as if I become part of the drawing. It truly does have a sort of trance-like effect.

I came across an article in the LA Times about a couple who will open their house to writers to provide that much needed solitude to create. I like that idea. Laguna Beach here I come. I already have the beach rocks.

This is another study of beach pebbles collected from Ferryland on the southern shore
I can't resist picking up pebbles and shells or the prickly remains of sea urchins. Their brittle spines crumble at the slightest touch, like chocolate sprinkles at the first bite of a cupcake. Phantom crabs, their contents long eaten by seagulls or dessicated by the wind and sun surface on the cool grey pebbles. They are ghosts of the sea, along with the urchins. Now fragile and brittle with time and the elements, their colours seem false as if something long dead should not have the glow of life still about it. 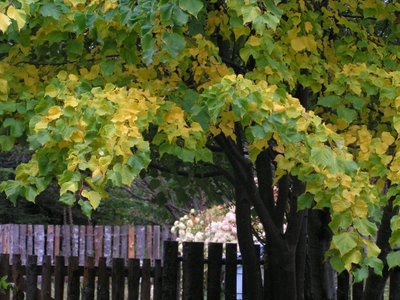 Some of the trees in the garden are reluctant to give up their leaves while others are waiting for a hint of a breeze the shake them loose. This mix of maple and mountain ash trees surround the entrance to the fenced in section of the garden at the back of the house. Its a little oasis in a large area and was constructed for the dog to keep him contained from running in the woods and getting lost or hurt. 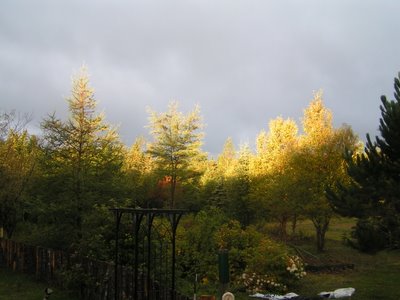 I liked the way the leaves and branch draped almost like arms and the mix of colours was so appealing, leading the eye to the hydrangea in the background. The early morning light catching the tops of the golden trees looks wonderful and highlights the colours so well. 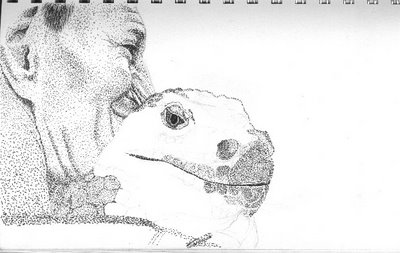 I am hoping to catch up on some drawing as while teaching and with a busy few weeks at work, I haven't had much time for anything more than simple sketches. I rediscovered a sketch that I had started a year ago. It was done in pen and ink, a stipple technique, which while time consuming, is very effective. Now if I can only find the reference image again, I will try completing it. 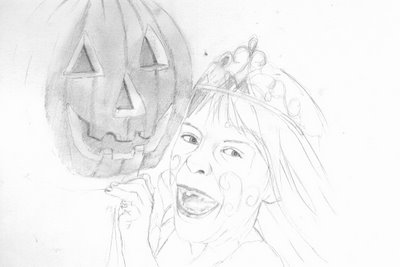 Sly does it. Tiptoe catspaws. Slide and creep.
But why? What for? How? Who? When! Where did it all begin?
'You don't know, do you?' asks Carapace Clavicle Moundshroud climbing out
under the pile of leaves under the Halloween Tree. 'You don't REALLY know!'

--Ray Bradbury
from 'The Halloween Tree'

Halloween. From its origins to present day is a far stretch of imagination. Today its more like a begging festival as kids go door to door lugging not the little plastic pumpkin that we toted as kids, but pillow cases to hold their loot! Did people give out much less when I was a child or are today's Halloween goodies supersized like the rest of the North American diet?

Living in the country as I do, not many children show up and the ones that do are driven by their parents. Today, only one set of kids turned up, so they got about half of the bag of Caramilk bars that I bought. I know I should buy something that I hate, so I won't be tempted to eat them. However, I'm not in a chocolate mood, so they're safe tonight.

Tripod, also known as Dr Love because of his supersmoochy nature, the stray cat, has ventured into the house now. He's still timid but his need for heat and companionship over rides his need to panic. He does race for the door at sudden sounds and movement but is getting calmer by the day. As I write this he's stretched out on the sofa, asleep. Food, heat and a pat on the head works the same for all living creatures it seems.

This sketch amused me. The twinning of the girl and the carved pumpkin was too good to resist. 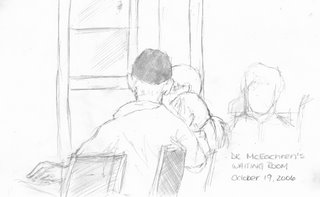 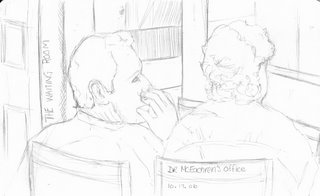 I've been very busy with work and life for the last week and haven't had much 'me' time to draw and its taking its toll. I feel distinctly deprived and find myself doodling at every opportunity on bits of paper at work. I've tried bring my Moleskine to work, but even at lunch, there are interruptions and I never seem to accomplish much, but I'll keep trying.

A week or two ago I took my mother to some doctor appointments and knowing that waiting rooms are named aptly, I took my sketchbook. I managed to do a couple of sketches on each visit, but the second wasn't as lengthy a wait. I had a few suspicious looks from waiting people, but no one said anything. I always feel a little intrusive when sketching people in a 'captive' situation. But mostly people are kind or interested or uninterested. I try to avoid eye contact if I can as that does draw people in like magnets and then my limited sketching time is even more limited as I explain what I am doing and then they want to see the sketch and the others in my book and suddenly the time and mood is gone.

The change in time screwed up my internal body clock and this morning I woke at 5am. I got up, made coffee then decided I would make a start on the underpainting of the dog image I had penciled in a couple of weeks ago. So I met the dawn an hour later with the scent of turpentine and oil paints and for once didn't manage to dip the brush into my cup of coffee.

This weekend is the last day of the beginner's drawing class that I have taught.Eight weeks have moved by quickly and there is interest from others to do another course, so I will look at times and numbers and see when the next can happen. Others want a place to draw once a week which I am considering too. Compositions can be objects or people provided there is enough interest to ensure that I don't end up paying for a model on my own all the time. Its another option to work with.