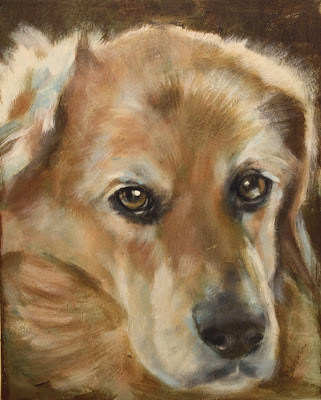 I have been considering a newsletter for awhile and its been brewing in my head and in draft copy while I mulled it over.  Today I took the plunge with a brief initial copy and a promise of more to come.  Jeanette Jobson Fine Art newsletter will be monthly and any updates or changes will be sent out to subscribers.

I am using a specific email software - Constant Contact -  to produce and manage the newsletter.  It becomes one less thing to deal with if I know that my email list is secure and that the format of the newsletter is professional and appealing.  No, it is not free, but it provides me with the services that I need to provide the service that I want my subscribers to have.

I`m adding a few features that will remain constant, such as `Monthly Collector` where subscribers will have an opportunity to purchase a piece of my work at a reduced price for a period of time.  I will also be adding other features such as draws for paintings or prints, interviews with other artists, tutorials and video.

I have provided a sign up widget on the right side of this blog as well as on my Facebook page to make it easy for people to access the newsletter.

And for those artists wondering if a newsletter works, the initial Monthly Collector piece for September at the discounted price has sold.   This piece is now available at the regular price on my `Photographs`page.   Be kind to your collectors, keep them informed and treat them as the important people they are.  To all my collectors, friends and artists who support my artistic way of life - thank you!

I tweaked the painting of Biscuit that I started last night with my hour time limit.  I added about another 30 minutes of work this morning and this is the final piece.  I then went to visit him where he is buried at the edge of the woods to tell him about it.  He approves.
11 comments: 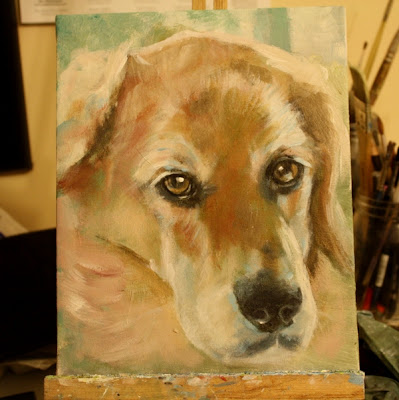 While clearing out the studio I found some old canvasses paintings that were put into the never never pile.  Being the frugal artist I decided that I would start painting over them.  Why buy more if I can use these right?

I found a photograph of Biscuit, my old dog, dead 4 or 5 years now, poor soul.   I decided that I'd give myself a time limit again and see what I could come up with in an hour with some acrylics.

This is the result and I'll do some more work on it tomorrow and it will either work or go back to the pile to be repainted again.

I've figured out Blogger's secret for images now.  If the image is photographed vertically instead of horizontally, and I adjust it in an editing program, it will revert its original state.  Very very frustrating.  Blogger, please fix that!
8 comments: 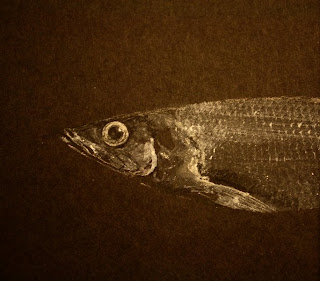 Smelt are a cousin of the capelin family and I hadn't seen one previously until Lori provided me with one on her return from coastal Labrador/Quebec.

It was fairly delicate, as the capelin are and didn't take many prints before starting to degrade.  However, I think I got at least one good sheet of prints from it and then tried this one on a piece of black card that I had on my table.  Unfortunately, I had managed to smear ink on the paper so only the front half of the smelt is usable. 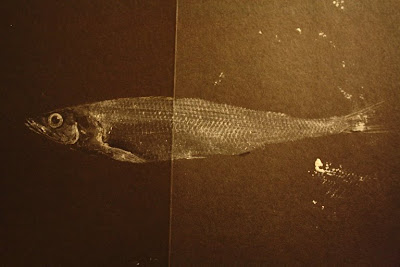 I rather like the ghostly effect on the black paper and the final print sheet has similar in pale gold on a rich deep blue handmade Japanese paper called Moriki Kozo. 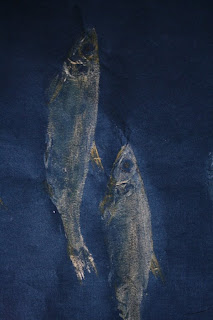 This isn't the finished piece, but gives you an idea of the colours in the inks I'm using as well as the paper.  Why its posting vertically instead of horizontally, I don't know.  Another of Blogger's little mysteries!
13 comments: 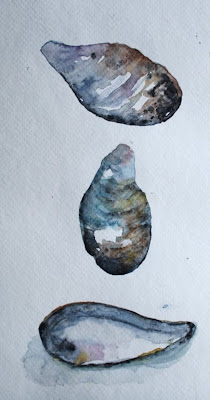 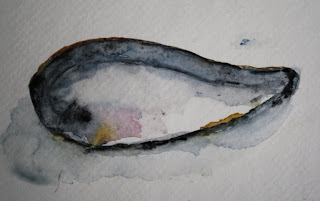 Its been a wild 24 hours or more with the arrival and departure of Hurricane Igor.   Being surrounded by trees in the woods is generally not the best place to be in a storm, but luckily, despite debris of tree parts flying and trees being uprooted, we survived with minimal damage.

The power went off for 18 hours and that left a sump pump in the basement not working and a bunch of young chicks in the barn that needed heat lights on, so generators were called into action.  An all nighter was done to keep checking the waterline at the pump in the basement to make sure it didn't overflow and flood the basement. 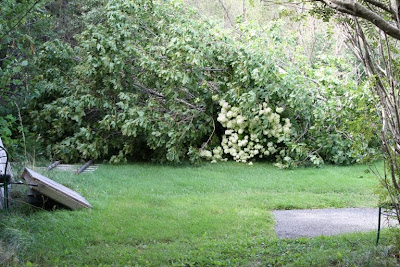 The storm is past, all things are still in one piece and life gets back to normal slowly.  Unfortunately some favourite trees in the back garden were blown down - a maple and a birch, both about 40 feet tall.  Willows at the rear have a distinct lean to them too.   I so hate to see trees damaged, especially 'my' maple, it was so stately and lovely.  But it had the grace to fall on the hydrangea and flatten the fence instead of the house, so that's good! 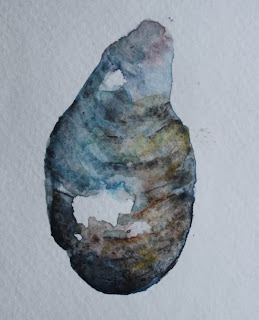 I sketched a few views of a mussel shell while the storm raged outside.  I just adore the Lunar Black watercolour from Daniel Smith.  Its granulates so perfectly when painting shells or fish.  Its likely o ne of my 'can't do without' colours.  Chris Beck has told me that when wet, if you draw a magnet under your painting, you can drag the lunar black particles around!  Isn't that amazing?  I haven't tried that yet, but I must!

Drawing or painting by candlelight sounds romantic, but in reality my eyesight won't cooperate with that light level to do finer tasks, so art was abandoned once darkness fell.  Hopefully now I'll have some time to play catch up on some projects.  Of course now I'm catching a cold.  I blame it all on Igor.
4 comments: 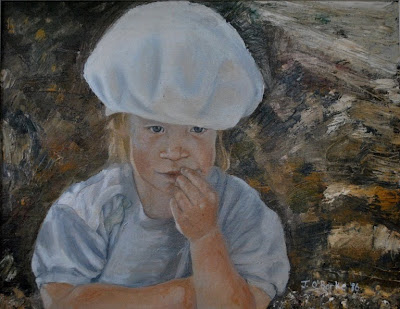 Its funny to look back on art done years ago and see where you came from, what you produced and how you change over time.

This oil painting is one that I did in 1986.  This was of my niece who was about two years old at the time and in the UK staying for a visit with me.  Looking at it now, there is so much I want to tweak, but it should stay as it is as it marks a moment in time for both her and me.

However, that background...just a little tweak...
5 comments: