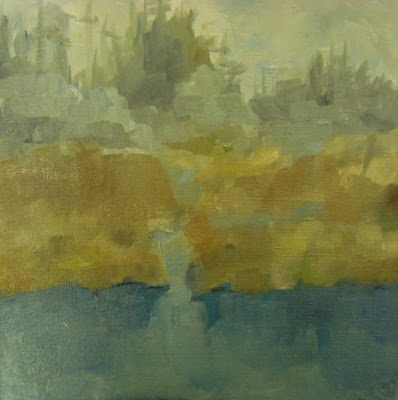 While I'm still working on the portrait from yesterday's post, I have also been having another look at other pieces that I did but wasn't completely happy with.

This piece was part of a series on the journey of water to the sea. The original was a little washed out. Part me, part due to the season it was done in. Spring here is slow coming and things turning green slower still and I just couldn't seem to get the right colour mix for this water coming off the marsh into the stream.

So I changed the sky, softened the background and gave it a looser feel that I'm happier with now.

Its on 8 x 8 canvas panel in oils.
No comments: 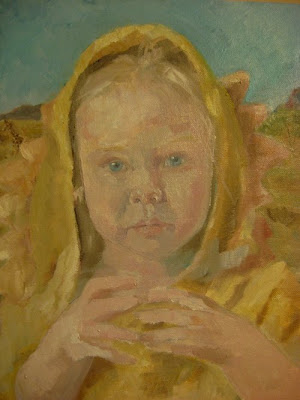 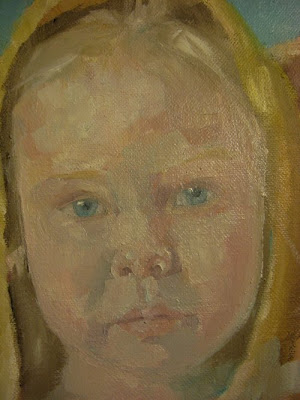 Like most artists, I have a 'discard' pile. These are paintings or drawings that were started, then stopped for some reason. Either the piece didn't inspire me, it wasn't matching the vision in my head or I was simply painting badly, so it was added to the pile in a corner of the studio hoping one day I would want to see if I could salvage it.

Over the last couple of days, I have dusted off some of the pile and done some additions, repainting or surface alternations to begin new pieces.

This is one of the pieces that I put aside. Its the start of a portrait of my grand daughter who was here in June. She'd just had a bath and was wrapped up in her lion towel and was posing beautifully for me in the evening light by the window as she had her eye on my camera and wanted to play with it.

As she was dressed up as a little lion I though what more apt but to place a background of the plains of Africa. The bones of that are in place and while minimal in terms of canvas space and values, I hope it will work.

The first attempt at the portrait didn't work and I put it aside then thought I'd pull it out again and see what I could do. More layers and its starting to come together now. I can't find my very small brush to do some more work on the eyelids, so they'll have to wait til tomorrow when I can buy a new brush.

This painting is done on gallery canvas and is 11 x 14 in oils.
6 comments:

Who do you think you are? 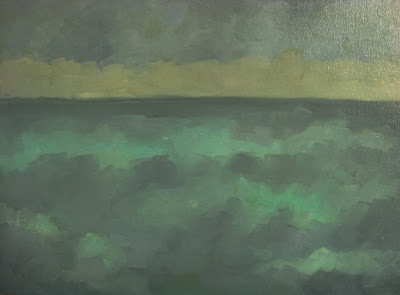 I heard it yesterday. That voice. That snarky voice in my head that second guesses and gives me an earful when I do something that pushes me outside my comfort zone or when I do something a little bolder or self serving. I heard it clearly and disturbingly as I walked up the steps of the museum and art gallery, submissions in hand. And it nearly made me turn back. But I pushed the voice aside and continued on.

It's the voice that says "Who do you think you are?"

The voice comes singly or in a group. Christine Kane visualized her voices as a group of high school girls.

Their eyes are lined with thick black pencil. They wear concert t-shirts. Their hair is burnt from too many home perms. One of them steps forward and says, with her hands on her hips, “Who do you think you are?” And then she turns to the others and says, “Who does she think she is?” Then they all take an aggressive step forward.

My friend Joy told me that “Who do you think you are?” jumps in whenever she imagines hanging out on the sofa reading magazines.

A few years ago, I saw Oprah speak. She said that every time she wanted to achieve more, the first voice she heard was “Who do you think you are?”

Every woman I know has her own version of this voice waiting in the wings.

In other words: Stay down, play small, shut up, and don’t embarrass yourself. Don’t even bother because you won’t make it, you don’t deserve it, and everyone knows it, and they’ll all laugh at you when you fail.

So, next time that voice jumps up in your head, here’s what you do:

Really. Who do you think you are?

One time, I was telling a mentor about some fears coming up around a choice I was making.

I said, “…and all the voices in my head are saying, ‘Who do you think you are?’”

And he looked at me and said, “Well? Who do you think you are?”

I smiled and continued with my story.

“No. Stop. I really want to know. Who do you think you are? Tell me right now.”

In a very tiny voice, I told him.

Then he made me say it again in a bigger, stronger voice. And again after that.

He said, “There. Now you have an answer for your voices.”

Now I do this exercise every time those voices arise.

When you answer that question, use language that speaks the truth of your strengths and values

In other words, make it authentic.

It’s tempting to recite something that sounds “lofty” or “holy." I know you know what I mean. “I am a divine being, living in divine perfection with power and grace..and blah blah blah...abundance and light."

True as that may be, if that language doesn’t resonate with you, you’ll never feel any bolder, and those high school girls with the black eye pencil will put their cigarettes out on your shoe.

The Co-op of Lack

My theory is that “Who do you think you are?” is actually a Co-op.

It’s convenient to have this world-view because it gives you permission to stay stuck. It never requires that you do anything about it because after all, you’re dealing with a whole world-view!

When you say, “I no longer want to work with this abusive client,” you’re also saying, “AND, I believe there are multitudes of others out there for me.”

When you say, “I’m gonna nap right now, and I will be more productive and happier because of it,” you’re also saying, “AND, I believe that there’s more than enough time for me to get my to-do’s done.”

Most likely there are occasions when you’ve been the one saying, “Who does she think she is?” (Even if it’s only in your head.)

Don’t be ashamed. It simply means that you have more opportunities to shift those old lack mindsets. Usually those mindsets are saying: “I’m feeling small and poor, so she should be small and poor too.” We’ve all caught ourselves doing this.

Even if it’s uncomfortable, you can choose to bless or praise anyone who seems to be taking bigger strides in her life. Then remind yourself again who you think you are, and join her!

Performer, songwriter, and creativity consultant Christine Kane publishes her 'LiveCreative' weekly ezine with more than 4,000 subscribers. If you want to be the artist of your life and create authentic and lasting success, you can sign up for a FRE*E subscription to LiveCreative at www.christinekane.com.

Looking into the past 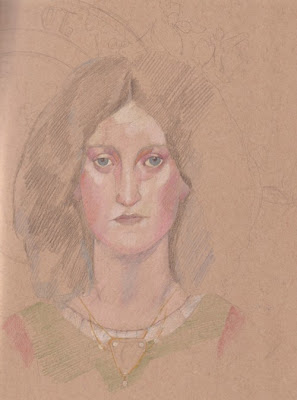 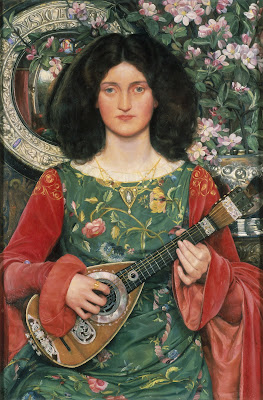 Melody - Kate Elizabeth Bunce 1895
Kate Bunce was an English painter and poet associated with the Arts & Crafts movement. Her earliest known work is The Sitting Room (1887), and in 1893 Bunce was one of the artists invited to contribute murals to hang in Birmingham Town Hall. Her work became increasingly influences by Burne-Jones, Rossetti and the Pre-Raphaelites, and was characterised by strong figure drawing and a clear use of colour. Later in her life she painted a series of decorative pices in churches, often alongside metalwork by her sister Myra Bunce.


This piece by Bunce, called Melody, is one of my favourites and is one of the references in the September portrait challenge in WetCanvas. I haven't had a lot of time to draw or paint this weekend but wanted to try a quick sketch to get a feel for the piece and see if I would be brave enough to tackle all that detail in oils later. 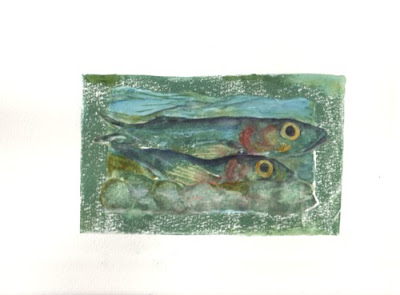 I like enhancing prints and see how they can transform. The same lines, same structure but each piece appears completely different depending on what I do with it.

So I used the linocut that I made the initial print with last night and started playing with some watercolours. The ink I use for printing is water based, so watercolours work well with it. The first piece if rather dark, in a sombre way, but still gives an impression of fish perhaps at a different time of day - dusk or dawn. 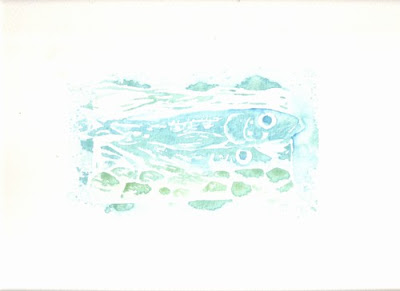 The second and third prints are straight watercolour onto Arches paper. The first is turquoise, the second geranium lake. I was using a block of Arches so it was difficult to get a strong print as pressure wasn't as even and a baren wasn't really required as it would be with ink. However, I like the pastel colours. They could be added to as well but for now I'm letting them stand on their own. I rather like how the watercolour pools and fades, giving a strong impression of water. 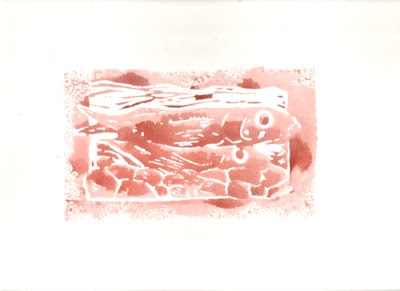 The prints are on 12 x 16 paper with the 7 x 5 piece centred. I envisage a border that would use the blank space as part of the image. I have had to scan these images or parts of them as it seems every camera in the house has dead batteries. It will have to wait til tomorrow then I can tinker with framing ideas.
3 comments: