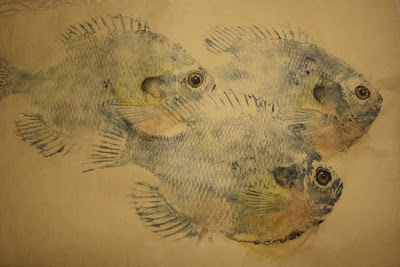 Bluegill (Lepomis macrochirus) is a species of freshwater fish found in Canada and the USA that is a member of the sunfish family. Of tropical sunfish body shape, the bluegill's most notable feature is the blue or black "ear", actually an extension of the gill cover called the opercular flap. Its name, however, comes from the bright blue edging visible on its gill rakers.

A 2006 National Geographic article discusses how the common bluegill fish is being used to protect public drinking water for millions in the United States from terrorists and accidental contamination.

This is my test print for a bluegill print.  I'm adding some colour to it and its on a fairly absorbent Japanese paper, the name of which escapes me at the moment.  Okawara, I believe.  The print is done using Caligo Safe Wash ink in phalto blue and the paper is 13 x 17".  I like these little fish with their intent expressions and interesting shapes.   Like any other type of painting, a study works wonders in ironing out the problems that can occur that would waste time and money.
11 comments: 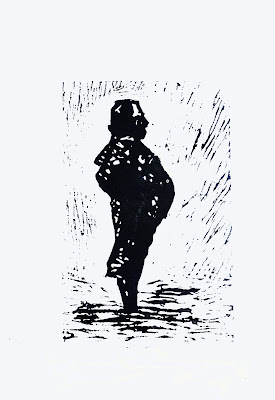 Last year I carved this piece out of a lino block.  It was an image of the quintessential beach goer of a certain era - and still around in places. I found the master block for this the other day and have reprinted six of these images using Caligo black ink on mulberry paper.  The print itself measures 4 x 6 and has a generous border around it for framing.  The whole piece measures about 7.5" x 9.5" and can be purchased on my 'Under $50' tab on this blog.

We all have or have had an Uncle Vinnie.  He's pushing 60, is portly, jovial and professes to be a champion swimmer in his younger days, but now paddles up to his ankles at the seashore while watching the world go by in his Hawaiian shirt and rolled up pants.  Vinnie was in sales and has the patter to go with it, striking up a conversation with anyone lingering within earshot.  Vinnie was always 'the best salesman they ever had' and his stories are told over and over and over.  With a few drinks Uncle Vinnie gets a little louder, but then with food added to the mix, he generally sleeps soundly on the sofa or armchair, drowning out the television with his snores. 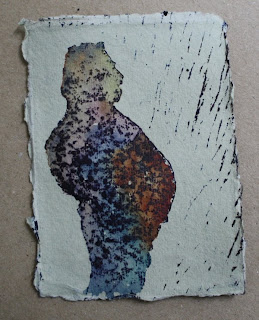 You know you want Uncle Vinnie to come for a visit, don't you...?  Tell me a story about your 'Uncle Vinnie' in the comment section and on Sunday, September 12th, I will draw a name from the comments received and the winner will receive an tiny print of a colourful version of Uncle Vinnie. This is a 3 x 4 print, enhanced with watercolour on handmade Indian paper. 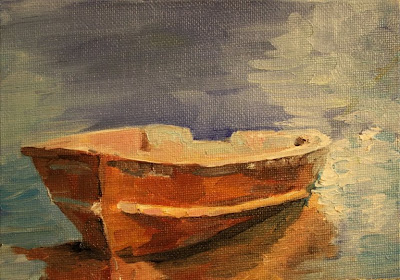 I wandered around Conception Bay yesterday.  The sun was hot and the wind strong with the tail of Earl creating white caps on the water in open areas.  In sheltered areas, the sun was hot enough to singe you in minutes.

There are a number of tiny villages on the edges of Conception Bay, some that I hadn't even heard of like Kitchuses.  The view was beautiful and almost like another world at times.  Some of the sheltered coves were meccas for yachts and sailing boats along with the mix of small fishing vessels. 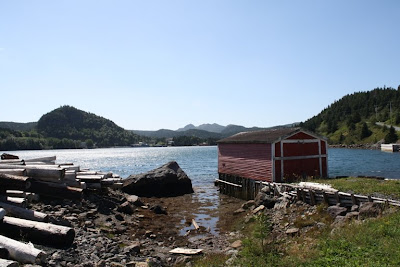 A little brick coloured dory caught my eye as it sat in shallow water almost on the beach.  This is the result in oils on 5 x 7 canvas panel.   This is available for purchase here.  Just click on the Under $50 tab at the top of the page to view it and more pieces.
7 comments: 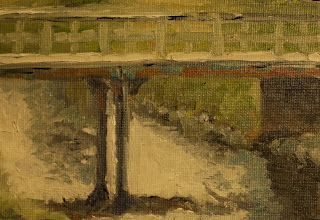 I was up very early this morning, unable to sleep so I started another in the series of hidden river paintings that I am working on.

This is a glimpse of the Waterford River that flows directly into St. John's Harbour.  As it nears the harbour, there are several foot bridges that cross it, allowing pedestrian traffic across and the river widens and slows until it reaches the dry dock and disappears underneath into the harbour water.

I liked the mix of industrial and natural elements in the image, as well as the light of a cloudy day reflecting on the water.  The painting is 5 x 7 on canvas panel and painted in oils.
3 comments: