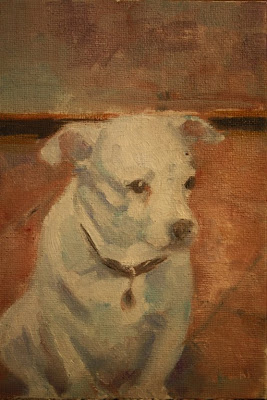 Working from life or your own images is usually the best form of reference but sometimes it isn't always possible and you are not in control of colour or values.  But there are ways to push the image into a form that will help you see light and shaded areas more easily and help you create value maps in your painting or drawing. 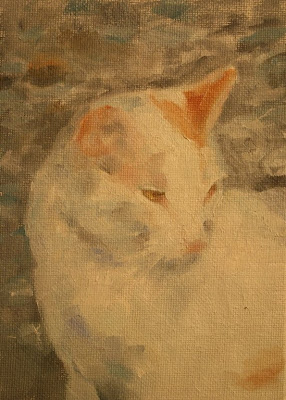 I was using up the end of paints on my oil palette with these two little pieces from this weekend's WDE at WetCanvas.  The images, provided by Harry Hamill, didn't have the levels of clarity or shadows that I would normally look for in a portrait reference, so I need to do some tweaking before tackling them.

Posterizing enhances areas of minimal shading in bands that are more distinct, allowing the artist to see more easily the value map of an image.  This is so useful when shadows are weak or seemingly non-existent.  That and a little darkening of midtones and the image became clearer in value placement and much easier to tackle.

These pieces are 5 x 7, completed in oils.
No comments: 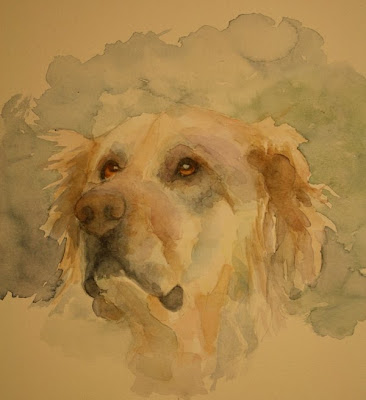 Years ago when I did a lot of animal commissions while in the UK, one of the most common dogs that I painted or drew were Labrador Retrievers or Golden Retrievers.  I even had a golden Lab myself, the wonderful Baggy, who I rescued from an animal shelter.  Baggy was found wandering the streets of Bridgewater, half starved and was a large Lab with a head like a boulder. He was quite old and I was always taking in waifs and strays so he came home with me.  He got his name because his skin was literally hanging on his frame he was so thin when he first arrived.  I soon fattened him up.

He had obviously been trained to carry at some point and would get anxious on walks if he wasn't able to carry a bag or his lead.  I had a little mini dachshund then so I would hand over her lead to Baggy and they'd walk slowly on ahead of me, he hanging on to her lead.  It used to amuse people as she was so tiny and he so large.  He was a great dog. 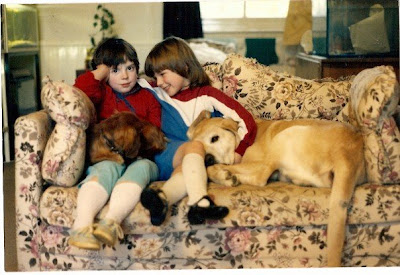 They are usually gentle dogs with kind natures, good around children and also great dogs to take hunting. Baggy was all of the above, but I don't know his record as a gun dog as I have never hunted.  This was one of his favourite spots, snuggled up with the girls and Daisy, the dachshund, pretending he was a lap dog.

I liked the expression on this dog's face.  He was alert, watching something or someone. And he reminded me of Baggy. So I did a quick watercolour sketch laying in basic lines first then just adding colour as I went.  Its about 9 x 12 on 140lb Arches.
9 comments: 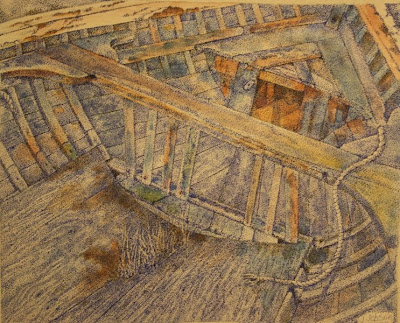 I've added a light wash of colour in places to accent and break up all that blue.  I still can't get a decent scan or photo of it.  I'm just going to stop saying that.  Everyone who reads my blog knows my photo skills are crappy.  I make no apologies.  Its a left brain thing.

Meanwhile I've created some bio notes as I have a few irons in the fire that need immediate attention.  Writing in third person always feels odd.  I keep thinking 'who is this person? Do I know them?'  However, the formula is there for writing a piece about me and my work and I'm pretty happy with it. I'm in giclee mode now that spring is more or less here and will visit the printer in the next day or two to get some pieces underway.

There are projects in store that I can't say anything about yet.  You didn't hear me say that, ok?
9 comments: 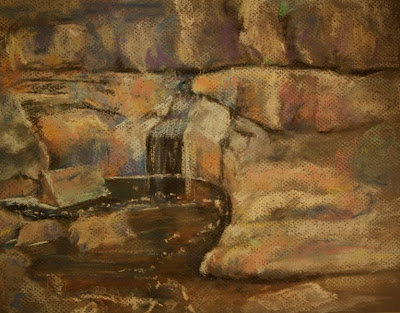 The movement of water over rock carved out this little curved pool at the base of some high cliffs near Red Head.   A stream wound its way from miles uphill through barrens, woods and rock.  It hugged the rock, mixing with a trickle oozing from the rock face that joined it on its journey to the sea.
It picked up speed as the ground sloped downwards over time and water smoothed rock leaving little bubbles of are and creating bands of foam then darkening as the stony hollow deepened.  It  became more still ,as if deciding what to do and where to go.  It hesitated before taking the final plunge into the salty ocean, relinquishing its sweetness to the cycle that would go on forever.
This pastel has more work left in it, but its heading in the right direction I believe.  This pool was found after travelling down a path that only mountain goats would go, that lead to the water and leave you at sea level literally.
No comments: 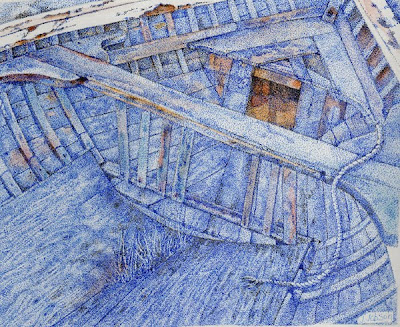 I'm nearing completion on this piece.  If I have enough time, I hope to finish it this week.  I'm building more shading and completing little sections of peeling paint and dampness in the plywood on the base of the boat.  Detail is what will make or break this piece I believe, as its such a tight crop.  And, once I get into it, I adore detail work.  Heaven knows what that says about me!

Once the stippling is complete I will likely reinforce the warm light of early morning as it lit the boat, with a pale wash of watercolour.  The hours on this so far?  I've not really been keeping count but I'd say probably 40, maybe more.
5 comments: 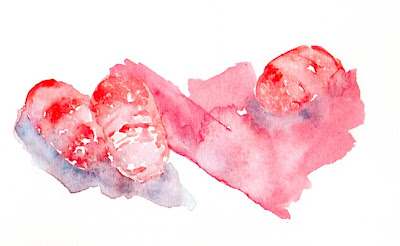 With only a short time available today to paint, I decided to take 20 minutes and apply it to a study in watercolour.

These peppermint knobs sitting on their red bag are part of the Purity Factories range of products which are local and somewhat of an institution in the province.   My initial watercolour of Purity Kisses was based on one of the types of candy produced here and I had a mini series in the back of my mind to do more of their candy.

Peppermint knobs are something I remember from my childhood and associate with my grandfather who always seemed to have a limitless supply of them in his pocket for me.  The indistinct striping and sugary coating haven't changed over time, not has the taste, which is mild peppermint and not over powering.

I have a drawer in my studio filled with bags of Purity candies and a few more products in my pantry waiting for their moment to shine.  I like trying a study of a piece before going for the real thing.  It helps me work out colours and composition instead of experimenting on a full sheet of paper.
5 comments: