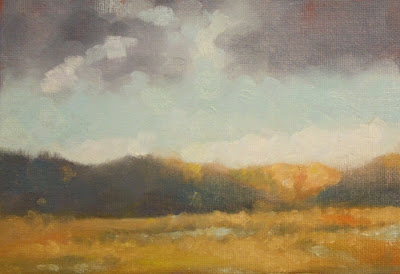 Last weekend I was driving home across a barren wetland and the rain was following as a dark band across the sky.  As I went further east, I could see a band of turquoise sky sandwiched between the dark and pale clouds.  The sun was highlighting the hills in their fall colour and little glimpses of shining water in the wetlands caught my eye. 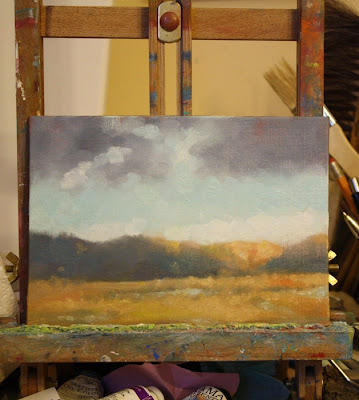 A combination of memory and the ability to walk just down the road from my house and see my own wetland, gave birth to this oil painting.
7 comments: 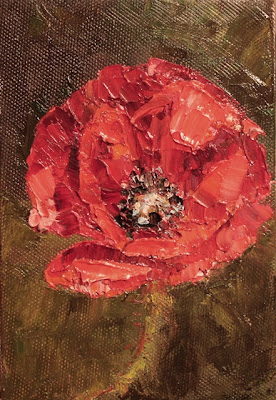 I was brought up in a knowledge of war and how it impacted families.  A great uncle died in World War I in France, whose body was never found.  22 years old.  My great grandfather was a soldier in the British Indian Army and served in South Africa, the UK and Canada. My grandfather served in World War I, discharged after injuries and events he never spoke of.  My father served in World War II and the Korean War.  Aside from humourous stories, we never knew of what happened during those times. All the horror was locked up in their memories and taken to their graves.

The world today knows nothing of hardship and sacrifice except for the military who currently fight in wars.  Even now, technology removes many barriers and remoteness from a soldier's life and make serving in the military very different than in the first two world wars.   Food is available, shelter and the tools to do your job.

When my great uncle died on October 11, 1916, he died in a field in Gueudecourt, France under asurprise shelling attack by German soldiers. There was no internet, long distance telephone calls were expensive and often inaccessible during war time and his parents struggled with the news, trying to piece together information about his death.  How, why...why, why, why?

We need to remember the horror of war.  Unfortunately we don't seem to learn from it and continue to repeat the past in varying degrees as more families ask why and how when they receive this heartbreaking news.  In Canada red poppies are worn around Remembrance Day to represent the battlefields of the past and the more than 100,000 Canadians who died there.