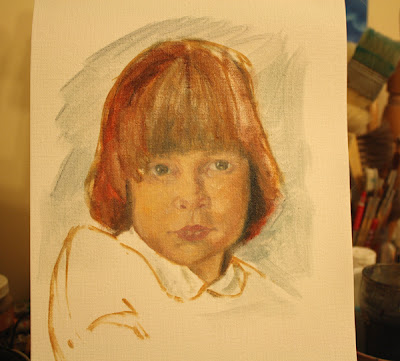 Ever the frugal artist, I was at the end of my palette after finishing up a few oil paintings, and used what colours were  left to do a quick study of my youngest daughter when she was 3 or 4 years old.

I'd put out a tub of blackberries to thaw on the kitchen counter and found young madam tucking into the frozen berries with a spoon.  I found the photo while looking something entirely different.  It was meant to be.

This is the progression with no initial drawing.  Sometimes quick studies are the easiest and most accurate as I tend not to over think them. 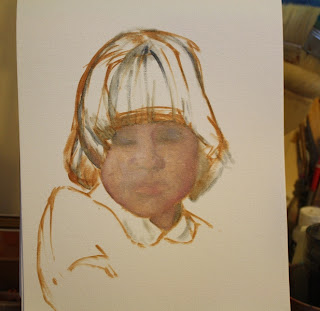 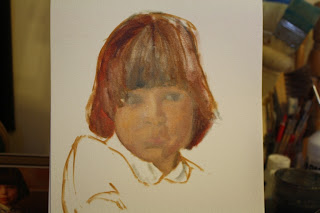 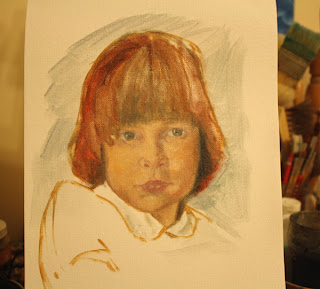 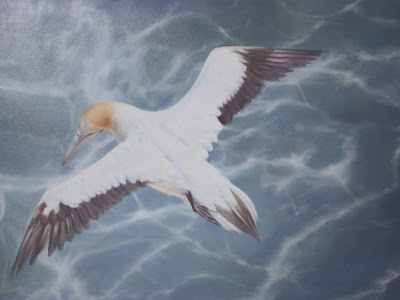 
I've spent some time finishing up details on a few paintings and Vertigo is one of them.  This is the final view of a Northern Gannet soaring over the ocean.  They dive like rockets, straight as an arrow, into the water to catch fish and its quite amazing to see them.

The feathers on the wings were the most difficult part of the bird.  It was a matter of breaking them down into small parts and just working steadily through them to get the task finished.  Some more glazing of the water surface and working on additional details of the head and overall values and I'm calling this complete.

I ran a segment of video while I was finishing some details of the bird.  Its quite difficult for me to talk about what I'm doing and paint at the same time, so there are gaps or stumbled words that didn't come out as I wanted them to do.

Anyone who follows my blog knows that I don't paint flowers.  I try now and then, but lose interest in them very rapidly.  Why?  I have no idea.

Painting animals, fish, water, rocks...I tackle them all happily.  But present me with a flower and my mind instantly thinks 'yuck'.  I guess we're all drawn to different subject matter for a variety of reasons and maybe some of it is where our journey in art began.  There are so many good flower artists out there who make blooms look fresh and alive.  I just don't think I'm going to be one of them.

However, in my bid to finish a number of paintings that are sitting on my drafting table, I am determined to do battle and win with this flower.  The iris bud.  Simple form, complex form.  There are many subtle variances in colour and value that give this form and getting just the right colour is challenging, but I finally think I'm moving in the right direction.  Conquering the greens...oh that is a story for another post entirely.  Why do I find greens so daunting?  Is it just me or does anyone else have issues with greens?  Maybe its just because green is one of my least favourite colours.

This piece is in oils on an 8" x 16" canvas panel.  I began this painting a couple of months ago and its sat there taunting me ever since. Bear with me for another few days and I'll whip it into submission.  Or burn it.
9 comments: 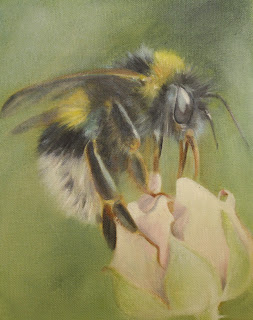 It a bit unnerving studying insects very closely, but fascinating at the same time.  The construction of insects, like humans, is quite remarkable and never truly appreciated until an intimate study is completed.

I've been working on other paintings today, finishing details and getting them ready for the framer later this week.  Decision making is the challenge of what to put into an exhibition, especially when I have 10 or 12 choices to make.  I'm narrowing it down, but may need your help with the last couple soon.

Today of course is the 10th anniversary of 9/11 and the attack on the World Trade Center in New York.  Newfoundland played a role in assisting aircraft and passengers when air traffic was closed over New York and directed to airports across the island.   In small towns, not equipped with hotels for large numbers, people were put up wherever there was space, including people's homes. In Gander in particular, Newfoundlanders brought people home with them, fed them, looked after them and developed new friendships along the way.  Its always been that way.  Now, 10 years later, those who were stranded here, are returning to remember the day and the kindness of strangers and present the town with a piece of the fallen WTC.

The Globe and Mail
12 comments: