There is something about eyes that has always appealing to me in terms of drawing or painting.  Capturing the light and shadow that makes up the eye and breathes life into it is fascinating. 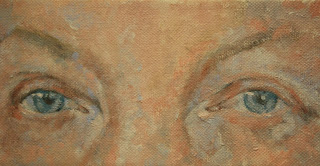 I have been using a long thin canvas - 4 x 12 - I've been using my own eyes as reference to see where I get in oils.

The day was flipping between sun and cloud and showers, but I wanted to capture some of the colours in the trees before a storm whips them away.  I wandered down the lane and through the meadow to find these gems. 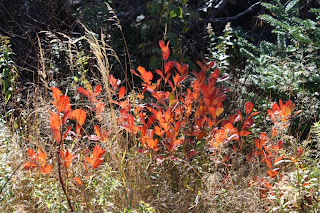 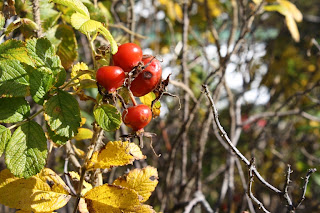 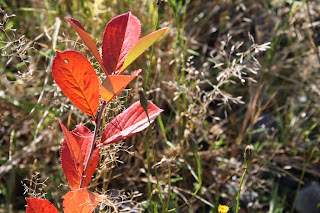 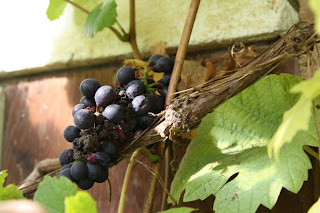 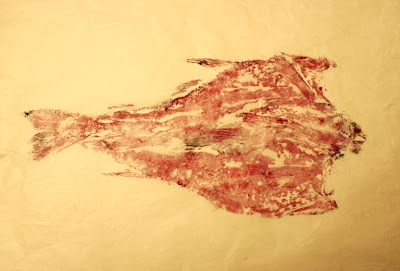 'Once so thick in the water that John Cabot reported they could be brought aboard by the bucket, Atlantic cod have been fished in Canada since the 1480's and were justifiably known as 'Newfoundland currency'. 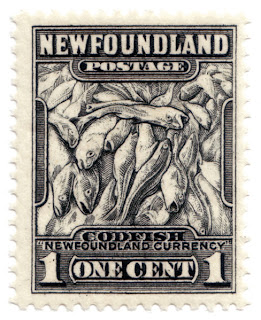 This 'currency' had even inspired a Newfoundland stamp.  If fresh cod were the currency, then salt cod were the gold that kept people throughout the island alive in long harsh winters.   After harvesting fish, fishermen (or more like their wives) laid the split fish on 'flakes' near the water to dry.  Salt cod is commonly produced in Canada, Iceland, Norway and Portugal and has been for over 500 years. It forms a traditional ingredient of the cuisine of many countries around the Atlantic.

Part of my gyotaku printing is salt cod.  Even in the age of freezers, many Newfoundlanders still dry cod and preserve it for later use.  Often it is covered with salt and either hung to dry or sometimes electric heat is used.   The resulting fish needs rehydrating in several changes of water to remove a lot of the salt and its a prime candidate for the traditional 'fish and brewis'.  Its something you either like or hate.  My heart can only take the salt and fat content about once every five years.

So a local fisherman gave me some whole salt cod with detailed instructions on how to cook it.  I didn't dare tell him I would be printing with it, not eating it! 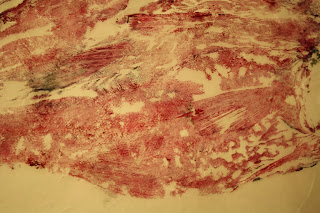 I used a couple of different Japanese papers to print several different colours from the fish.  This Unryu paper has swirls of fibre running through it, giving it texture and adding another dimension to the print.  The other paper I used was a handmade Sekishu.  I used oil based inks for the printing and the pieces are about 18 x 22. 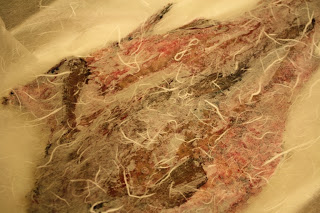 Salt cod under Unryu paper
I loved the look of the fish under the Unryu paper, its impossible to stop patting the fish gently when its under such lightweight paper.  The paper seems so fragile and it is when wet, but it also can withstand some manipulating with care.  Each print is a surprise as I never know exactly how the ink will adhere and just how each print will look.  That is part of the magic of gyotaku.
8 comments:

I've been working steadily on my gyotaku project, interspersing it with other pieces for a change and am making progress.

I've started the framing process for some pieces and am creating or recreating new pieces that fit my needs.   I've also been considering my options for displaying the final results of this body of work.  An exhibition is one of those, both real and virtual if I can decide just how to swing that.  There is a video option, slideshow or perhaps virtual exhibition software out there somewhere I'm sure!  I want to ensure that my ever expanding network of artist friends and colleagues also have the ability to attend the exhibition of this project where possible.

I am also playing around with the concept of a book to document the pieces containing images, an overview of the project, and explanation of the fish used and the technique.  This could also be a good marketing tool for the future depending on final cost.  The image above is a virtual page mock up of salt cod that I created using Blurb to get an idea of how it would look.

The registration information piece for my gyotaku workshop is due to be released on November 1st through my mail list.  Subscribers to my mailing list will be able to purchase a place at the workshop for a special price until December 31st.  Its easy to subscribe, just click on the link on the right hand side of the blog, add your email address and you're done!

Finally, keep an eye on the Seasonal Page on this blog.  It will be populated with goodies as of November 1st!  The 2010 Christmas Card will be revealed then.
3 comments: 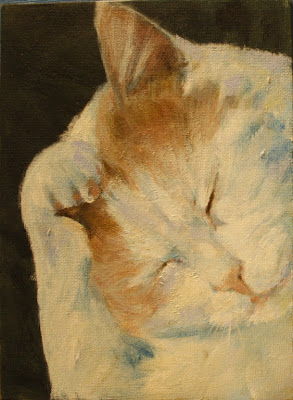 Tripod has challenges when washing himself.  With only one washing paw and that paw being the balancing paw too he washes his face lying down usually or leaning on someone.

This painting was started early this morning and finished tonight.  To fit in all I need to into my day, I try to get up early and get some painting done before going to work in the morning.  Sometimes it works, sometimes not. 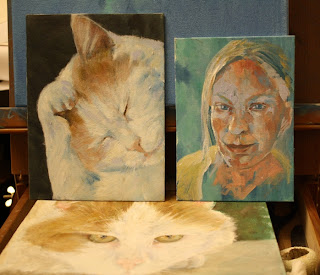 The piece is 6" x 8" in acrylic on canvas panel and you can purchase it on my Available Works page. I seem to be on a spate of acrylic paintings lately.  I'm still waiting for some oils to turn up, but the quick drying element of acrylics has some benefits in that they don't take up easel space waiting for them to dry.
7 comments: 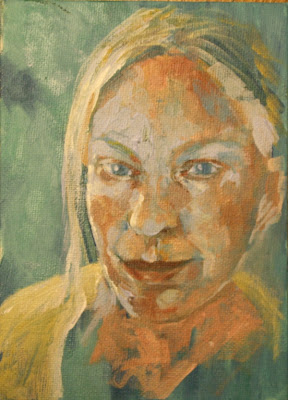 While waiting for some batik pieces to dry, I tried a small self portrait, allowing myself around 30 minutes to get something down.  Setting time limits works for me because it forces me not to overthink.

I wanted the portrait to be stronger in colour and brushwork and used acrylic for quick drying and the fact that I'm simply running out of easel space!

This is 5" x 7" on a reclaimed canvas panel. The view was from the webcam on my laptop, hence the blue tones from the reflected light of the screen.  Is it perfect?  No, far from it.  But the more I work on instinct instead of conscious thought for strokes, the better I become.
10 comments: