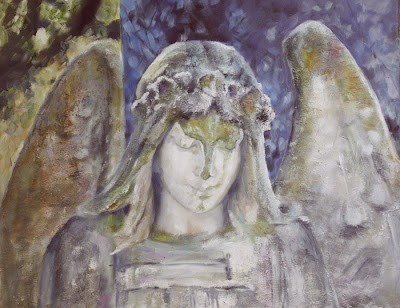 "But the gray and the cold are haunted

By a sense of a something wanted,

There are endless stories, images and paintings about angels in varying forms from benign to sinister.  For me, I like stone angels, usually those found in cemeteries. My favourite angel is the Angel of Grief, also known as The Weeping Angel, which is the 1894 sculpture by William Wetmore Story  which marks the grave of William and his wife Emelyn in the Protestant Cemetery in Rome.  Wetmore was an American lawyer who abandoned law to become a sculptor, moving to Rome in 1850. The Angel of Grief statue was the last work created by Story, in memory of his beloved wife  and which he had finished before his own death in 1894. Since then, the memorial statue has been replicated numerous times throughout the world, but none as beautiful as the original in my opinion.

Like most Victorian statuary, symbolism plays a strong role and the use of a wreath is associated with someone who has attained distinction in the arts, literature, athletics or the military.  Quite apt in this case and lucky for Story that he recognized his need to jump horses from law to the arts before it was too late. Ornate cemetery statuary is not commonly seen these days.  Cost of production no doubt, as well as lack of stone mason skills are likely culprits, as well as the predominance of simple grave marker - perhaps a trend in fashion over the years. 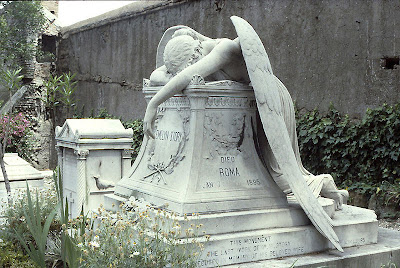 So not having such a dramatic angel to draw inspiration from, I settle for a charmingly serene angel, not quite so grief stricken as the angel in Rome. The effects of time and weather is showing on her face in the form of moss as it traces lines along curves of the face and hair and into nooks and crannies of clothing.

There's great appeal in the aging of stone and how nature begins to claim back and change the appearance of shapes and colours, creating its own sculptures. Capturing this is challenging and I used several pastes in the initial layer, aside from the face, to provide texture before applying oil paint over that.  Its not at completion yet, but is heading in the right direction.  A little drying before a new layer can go on the perhaps she can go up on the wall to watch over the goings on in the studio.