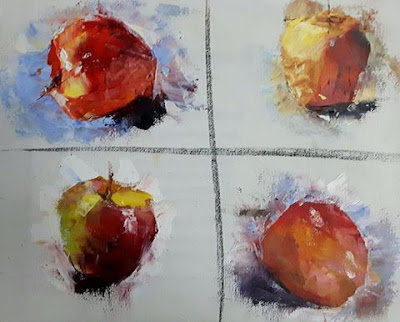 In workshops I offer students opportunities to expand their knowledge, improve their painting techniques and learn new ways of seeing what is in front of them.

I use a 10 minute exercise which cuts down on "fiddling" time.  Seeking detail at the beginning of a painting is a common trait in beginners, but is never successful.  They end up painting the same thing over and over and over as they adjust and readjust their work.  Seeing larger shapes and making quick decisions without thinking about detail helps the brain/eye/hand think like a painter.  Everything starts with the largest and most basic shape, then detail slowly emerges as you refine the drawing or painting.

Divide a small canvas into four (or six or more) squares. Using an apple (in this instance), paint it for 10 minutes then stop.  Rearrange the apple's position and paint it again for 10 minutes.  Keep doing this for as many times as you have squares on your canvas.  The first painting will be...different...and that's ok.  The last one and you'll be getting the hang of making quick decisions on colour, placement and value.

Try it and let me know your thoughts on the exercise.
No comments: 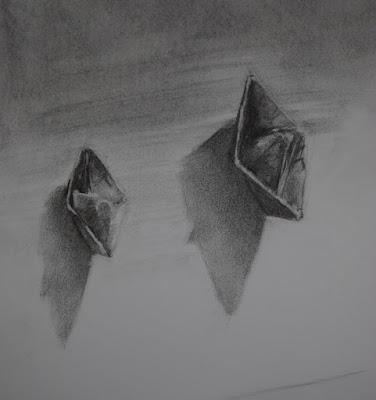 Procrastination is the avoidance of doing a task which needs to be accomplished. It is the practice of doing more pleasurable things in place of less pleasurable ones, or carrying out less urgent tasks instead of more urgent ones, thus putting off impending tasks to a later time.


Procrastination comes with all sorts of labels around it to justify its existence and the slow the inevitable - the performance of an impending task.  I'll do it tomorrow or next week.  I'd rather draw this now instead of the commission. I'll just watch this next episode and then start painting.  Etc., etc., etc.   I know, because I do it all the time and if I am not careful a day can be wasted and no meaningful art is created.  This can cause stress and increase deadline pressures and make my job as an artist not as pleasant. 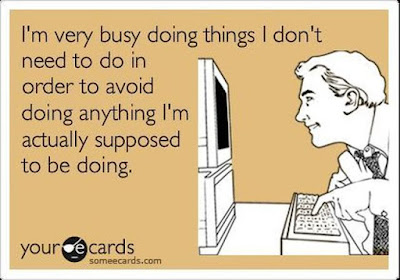 Procrastination is about time management.  We all have the same 24 hour period to fit activities, meals, exercise, recreation, sleeping, etc. into.  What we make room for shows its level of importance in our life.  And how disciplined we are in sticking to a time allotment, once we truly want to do something makes a big difference.

Procrastination in art students tells me a lot about how serious they are about learning.  If homework was "forgotten" or they were "too busy" to practice guides me in understanding whether they want to remain hobbyists or take art to a more accomplished level.
4 comments:


An early spring storm with northeasterly winds brought pack ice close to shore and with it a few polar bears.  Where I live, we got the ice, but not the bears, they were further north. 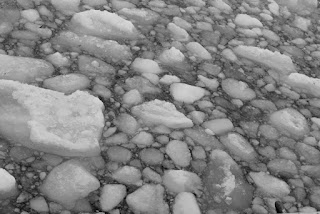 I always feel sorry for the bears, as they're usually disoriented and hungry.  People get too curious and too close and it becomes a dangerous situation.  The bears if too close for comfort, are usually tranquilized and airlifted back north.  Sometimes it ends badly for the bear if it endangers human life.

You can see some photos of bears on the Bonavista Peninsula this week here and here.  And video footage here.
4 comments: 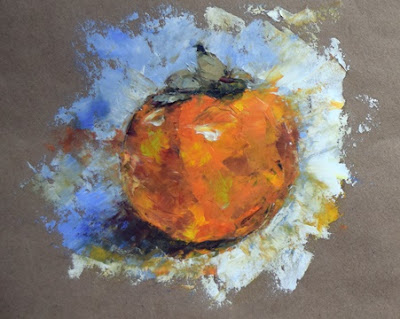 Their colour, form and of course taste, are wonderful.  Not being native to Newfoundland, they are a treat that I occasionally find and the need to paint them always takes priority over eating.

I've been trying heavy kraft packaging paper for drawing and painting and find it works beautifully for oil sketches, with no seepage of oil or buckling.  Now I'm no purist for supports when it comes to drawing or painting. I'll use whatever comes to hand to capture my idea.  If my support is a disaster or success, its all part of the learning process.

Sometimes its the journey that teaches you a lot about the destination.
2 comments:

Out of sight, out of mind? 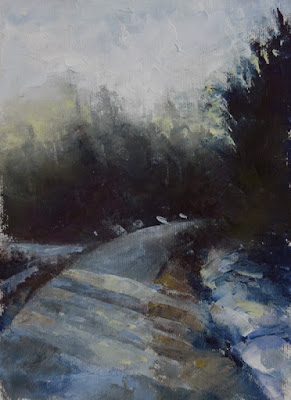 The blog has slipped my mind over the last 6 weeks.  No, to be honest, it hasn't slipped my mind, I haven't had time or interest to post.  There, I said it.  I truly don't know if I have more to say or share or if social media and its short clips of information has taken over from a longer post.  Blog readership and engagement is limited and I feel as if I'm talking to myself most of the time.  Do other bloggers feel similarly about the health of blogs generally?  I'd love to read your input.

After my last post in February, I got sick.  A cold led to flu which led to pneumonia in March, so creativity was abandoned. I have not felt so sick before in my life and will be first in line for a flu shot in the fall. My absence in the studio wasn't for lack of interest, but simply because I was too sick to make it to the studio and do anything productive.  I completed the February Sketch challenge by some miracle, but that was more likely that it didn't take a lot of effort daily and sketching is second nature to me.  So lounging on the sofa, I sketched and napped and let nature take its course.

After I was feeling better,  I headed to the studio with a vengance, trying to make up for lost time in painting production.  The summer season will be here before we know and I need both small and large pieces.  I've been in heads down mode, including putting workshops on hold to allow me time to really concentrate.  And its worked.  I've created a number of paintings and am just putting the finishing strokes on a 40" x 40" piece.