Tonight I found out that Bernice had died on March 7th. Bernice and I met in a drawing forum in WetCanvas and shared private messages and insider jokes, both of us being in Atlantic Canada. Bernice was a kind, gentle person with a wonderful talent in the art world. We both participated in drawing challenges as well as classes and both chose tomatoes as our demons of choice in a coloured pencil class with Cynthia Brunk.

Bernice will be missed by many people but the product of her work is her legacy.

Her last posting of a drawing - Angel Lamp - seems somewhat poignant now. And one of my favourite drawings of hers - Chrysanthemum - is here.
No comments: 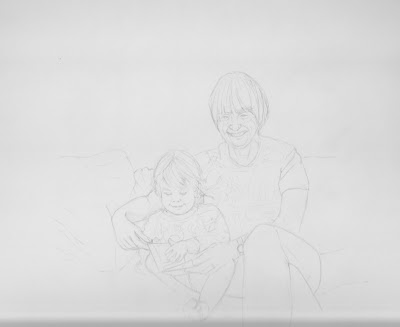 This drawing was done last year, it was a sketch that was going to be turned into something more of a woman and her grandchild. As sometimes happens, life takes over and things that were once important, become less important and are pushed aside to make way for newer, more interesting projects. But the old linger still, perhaps in portfolios or cupboards, waiting to see the light of day again or are simply destroyed.
No comments: 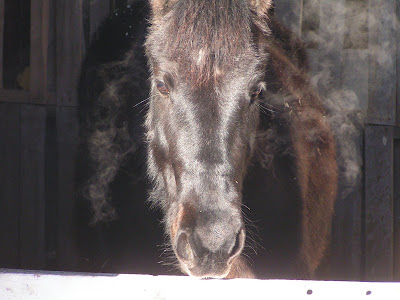 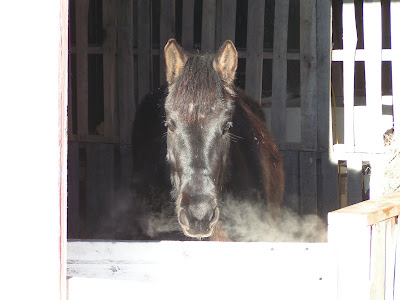 I always liked this photo of Kit. It was taken soon after she arrived on the farm in January. The weather was so cold and her hot breath billowed out like smoke from a dragon's nostrils. She had a furry winter coat that made her look totally different than in summer and represented the Newfoundland pony part of her family tree. She's been sold now, to as good a home as I know of. But I still wonder how she's getting on and what she's doing. I dare not ask or go to visit, as I know if I saw her I'd want her back again.
No comments: 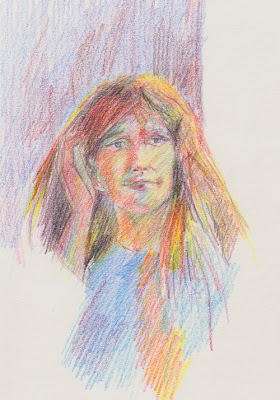 When I lived in England I worked closely with a community based organization and Women's Aid Federation. I supervised four women's refuges, in addition to other projects in the community. While I enjoyed my years working with community groups, the refuges held a special place for me. Not because they were pleasant places, but they showed me a lot about the human race and how people treat other people, especially women. I have seen things that I want to forget but can't. I have heard stories that come from the deepest darkest parts of human life that people don't want to believe still exist. I have experienced threats with cars, dogs and guns for supporting the women who sought shelter and have had to have police escorts at time to ensure my own safety.

Battered women come from all walks of life and their abusers do as well. I came across police officers, judges, lawyers, professors - educated people who all felt their means of control was through violence either physical or mental. I also saw horrific abuse and bodily harm come at the hands of labourers and white collar workers. Whoever applies the abuse and at whatever level it is equally devastating to those who undergo it.

The most common question is why do women stay with men who abuse them? The answer is that they are scared not to. Its been shown that when the abuser feels most threatened he is most dangerous so when a woman leaves or tries to, she is at highest risk of injury. Also, the mental control that the abuser has is high and depletes the woman's confidence level, so she believes that he loves her or believes that she is not capable of existing in the world without him. It is a form of brain washing, just as cults are.

Victims are isolated from friends and family and become increasingly withdrawn and depressed due to isolation and the levels of control over them, even if they don't realize what is happening to them at the time. Women often go back to the abuser a number of times before the violence escalates enough to snap them out of the fog and make them realize that the situation is not acceptable and that they're run out of excuses for the abuser's behaviour. 'I got in the way.' I made him mad.' 'It was my fault for not having supper ready.' The rationalizing that women make when they are NOT responsible is sad in many ways, but predictable too.

Women rarely press charges against their abusers even if the violence ends up with medical intervention. That goes back to the knowledge that often the violence would become even worse if they did press charges and it would 'anger' the abuser more. It would be one more thing to 'blame' the woman for. And beneath it all, the woman believes, even if she knows better, when the abuser says he's sorry and that he loves her more than anything in the world and it will never happen again. Believe me, it will happen again. And it will be much worse.

What I did discover is that the abusers are, in fact, cowards. They are insecure and unable to control their own thoughts or lives so they resort to lashing out at others around them and manipulating them to make themselves feel powerful. That does not justify what they do or why do it, but simply that they do. And there is no specific pattern to predict who will be abusive.

Police can't act unless charges are laid and are sometimes slow to react to domestic violence especially if they return a number of times to the same scene without charges being laid.

When the woman does leave, there are safe houses, shelters and refuges where she can be secure and get immediate help from qualified staff to get on with her life. A restraining order, created to keep the abuser away from his victim, is not worth the paper it is written on. They are not enforceable unless the abuser breaks the terms of the order which rather defeats the whole purpose of the exercise! The majority of women who have been killed by their abusers had taken out restraining orders.

Women who have undergone abuse often suffer from PTSD - post traumatic stress disorder and may need longterm counseling to deal with it.

What I have learned most of all is this:

The victim needs to realize that the 'love' is not genuine - it is the abuser's control mechanism. No one who loved another would physically hurt them or abuse them.
The victim should have a safety plan in place to escape if necessary.
The victim should be careful about not letting the abuser know she has contacted any organizations or sought help. It could aggravate the situation.
The victim must stop being a victim and regain her self respect.
The victim should seek counseling 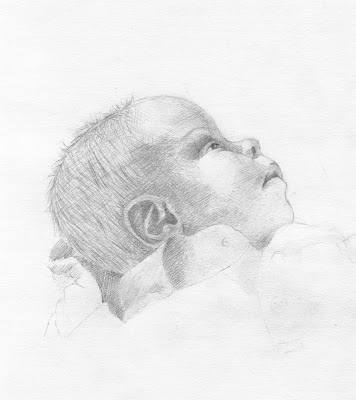 This sketch is of Kiora, my grand daughter, now 5 weeks old. I have affectionately called her 'Grandma's Grub' when I was with her as when I picked her up and layed her against me, she curled up , bum in the air, like a little inch worm. Thus the name has stuck now. I have more images of her and would like to try one as a watercolour or perhaps a pastel if I'm feeling very brave.

I received a webcam for a birthday gift so that I can let her see me and we can interact even if over a long distance as she's in Calgary and I in Flatrock. Technology may have to be the best to offer as in person visits are infrequent due to distance and costs involved.

I am considering creating an alphabet book for the baby. The book's illustrations and alphabet would relate to things in Newfoundland, the farm, the immediate family and other things that she can relate to and remember. The concept is in the early stages and may take time, but she'll receive it eventually I hope and remember it fondly over time. Perhaps it can become the next heirloom as I have no lacy christening gowns or long lists of relatives who provide family history. History is now and in the making. Only the future will turn it into gold.
3 comments: 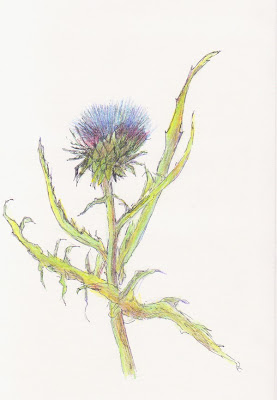 Its not only the thistle that is prickly today. Perhaps its the time of year or the cold grey days of winter that cause it, but everyone seems to have their tales of woe today. In Australia in Darwin, the northern section, in the midst of the hottest months from September to December, there is something called 'mango madness'. Tempers flare, air conditioning breaks down, people end up in court...

Well I think there is a 'snow madness' that occurs in northern climates that is similar. Its a cross between cabin fever, mountains of snow, hypothermic weather and lack of light that causes people to lose rationale thinking.

Sketch in 7 x 10 notebook, pen and ink and coloured pencil.

Winter teaches us about detachment, numbness. But it’s
a way to get through. From winter we learn silence and
acceptance and the stillness thickens.
- Gail Barison, The Winter Solstice of my Soul
4 comments: 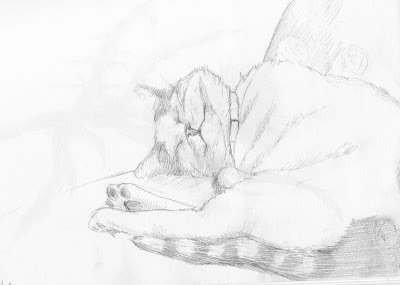 Tripod, the cat who thinks he's a dog, is a thief of warm spots. If I get up from where I'm sitting he whips in there faster than light to suck the heat from the spot and completely resists moving. I gave into his theft - enabler, yes, I know - and sketched his blissful heatsucking slumbers. He has that broad face and solid build of a tom cat and constantly reminds me of Garfield.

This sketch was done in a hardcover sketchbook 7 x 10, mechanical pencil. Unfortunately when I scanned it, the sketch on the next page showed through a little as a shadow in the background. 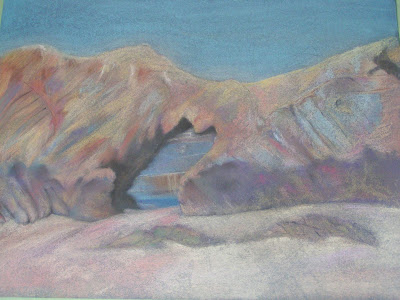 I'm calling the Pacific Arch finished and still haven't got a good image of it. There's a distinct lack of sunshine here lately which makes it near impossible to get a clear image. I'll keep trying however.

I'll work on finding the right sea arch for its Atlantic companion piece. There are a number of arches around the island and I hope to visit a few once the snow recedes. Meanwhile I'll do some practice with pastels and try to come up to speed with them once again.
4 comments: