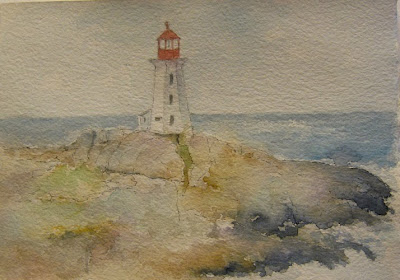 I thought I'd quickly put this piece up online before I head out the door.  This is a quick watercolour sketch of the lighthouse at Peggy's Cove in Nova Scotia.  The viewpoint is from Peggy's Point Road and done for the Virtual Paintout for November.

Seems no matter the time of day, I still can't get a decent image but this one is close.  However, the final piece is slightly different than this as I have added more pen work on the rocks, as indicated below. 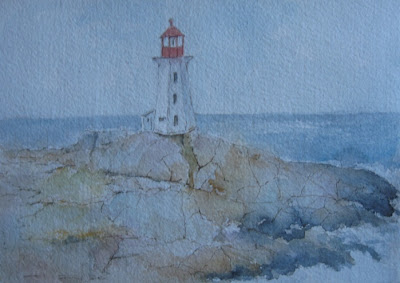 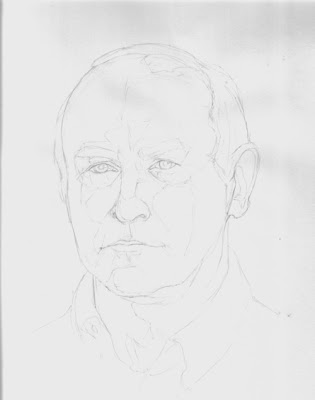 I've been fighting with a portrait for a couple of days, but hope that I'm conquering it now.  I decided on a fresh start and hope that will work wonders.  We too often second guess our first instincts and that often has bad results.  And sometimes the transition from small to large doesn't always go as planned.  But it only paper.  And if I have to start over 10 times, that is 10 lessons learned. 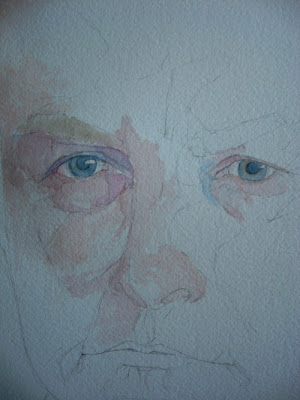 As a little change of scene, I thgouth I'd try my hand at this month's Virtual Paintout which is the Halifax region of Nova Scotia.   I know the area to some degree, or at least the more scenic parts and chose the classic tourist destination - Peggy's Cove.   This little lighthouse is perched on the edge of the Atlantic with surf worn rocks surrounding it.  Seas can be very rough at times there and tourists often stand on the rocks to watch them.  Bad idea.  A number of individuals have been washed out to sea by standing too close.  Rogue waves are notorious on the east coast.  Be warned!

I made a little start on a watercolour sketch. I still have to finish the rocks and intensify values.  However, that will have to wait for a few days most likely, as I head to Toronto tomorrow on business for a few days.  I'll be back late Sunday night so will unlikely be posting to the blog until Monday.

I ordered a new camera that should arrive next week.  I have a couple of cameras, an old SLR Minolta and a little Canon point and shoot.  They provide reasonable photographs but the megapixel size of the slr is tiny compared to what is available now, so I figured it was time for something new.  A Canon Rebel EOS with an 18-55 and 75-300 telephoto lens should fit the bill for current needs without breaking the bank entirely either.

Now I just need to learn how to use it properly!
3 comments:

Decision making always leaves me second guessing when it comes to art.  Its true that gut reactions are often the best ones.  There is some intuitive sense that seems to know best, whether its art or other decisions in life and often paying attention to those feelings stands you in good stead.

I'm in the process of deciding what images I want to print for greeting cards.  I want four images at the moment that will be available in packages of four cards and envelopes.  This is where you come in.

I would love you to help me choose which images that you believe are the most appealing or saleable. I've chosen 12 paintings that I think have appeal , at least to me. Simply choose four images that you believe are most suitable for greeting cards and write their appropriate number,  i.e., 1, 5, 8, 11, (they are in descending order #s 1 - 12)  in the comment section.  If you like you can also add why you like those images or, if there are other images on my blog that you think would be better suited, then link to them in your comment post.

The person who picks the same four that I finally choose to be printed will get a  package of the cards. In the case of a tie, the person whose comment is posted first will be the winner.  I will announce the winner on November 30th and you have up til November 29th to make your choices. 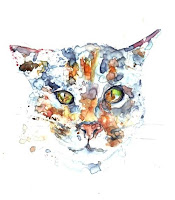 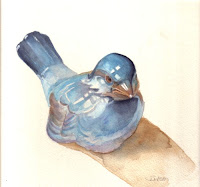 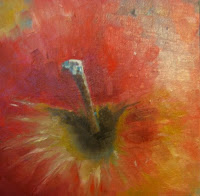 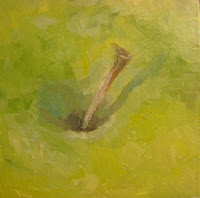 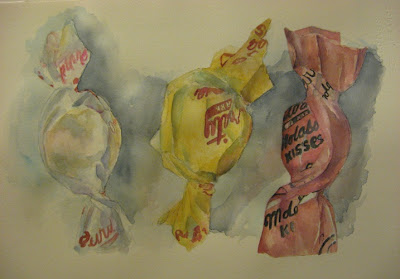 I worked a little more on the watercolour of the candy and am calling it done for the moment in terms of showing work in progress.  I still have to firm up the lettering and deepen folds in spots but that's not a large job. I have enjoyed the process of painting these, but there are challenges as well in all those folds and creases.

I have a few other projects looming on the horizon and some preparation to get some prints and cards into being.  Its a task I've been putting off and putting off, but now I simply have to get moving on it.

There is so much I could do with my art if only I had more time to market and produce.  I will have to seriously look at time management and see what else I can fit into my day. I have a feeling lunchtimes will have to go by the wayside to give me time to make visits to galleries and other businesses.

I have a bonus of having November 11th, Armistice Day, off work.  Everything else is closed on that day too, but I can catch up on some projects.  Then on Thursday I go to Toronto for a few days on business.

Is life really meant to move at this quick pace?  Some days I feel as if I'll never catch up.
11 comments: