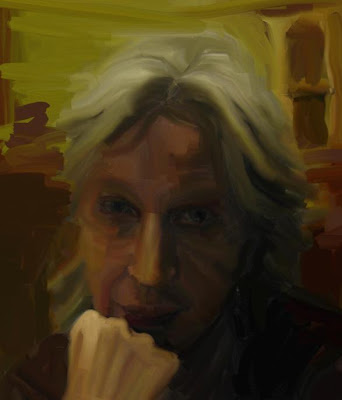 Oil Study - Self Portrait
copyright Jeanette Jobson
Living in Newfoundland has its benefits and drawbacks. One of the drawbacks seems to be the lack of readily available information on sources of art supplies, art clubs, and general visual art network information.

To try to bridge that gap I have created a Squidoo lens on Art Resources for Newfoundland and Labrador. Its a work in progress and will be expanded as I find information and add to what was currently available to me.

There are so many elements to art, from the concept and creation, down to marketing and selling and it often draws a blank in this province as people just don't know where to turn or how to access information.

I did a very loose - and muddy - study for a self portrait in oils to get a feel for it. Some parts are ok, there is a lot of room for improvement and I know better now the palette I need to use to achieve the skin tones for this dark lighting. I'll start the portrait itself as soon as I can get some time to myself. I've got a 16 x 20 piece of gallery canvas that was on sale and is just the right size for a portrait. Oils are still something that I'm re-learning. There are some happy accidents and a lot of unhappy ones in the process.
8 comments: 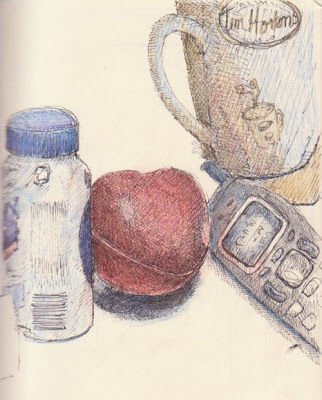 This sketch was done early this morning and sort of summed up both sides of my stress today, even at that early hour. An impending blizzard, a ton of work ahead, early morning calls to make to cancel appointments, all washed down with coffee to kick start the day.

Add a red stress ball in the shape of a heart and a bottle of Maalox and you've got my day in a nutshell.

However, the process of putting this little still life down on paper becomes stress relief in its own right. Studies have proven that drawing is therapeutic and a stress reliever. Sketching or drawing makes you concentrate on something else and you can become involved enough in it to reach 'the zone' or an almost meditative state. Just having art as an interest ensures that you spend time on it or thinking of it, letting your mind drift away from other problems.

So despite the blizzard making me shut down the office at lunchtime, I took work home and got a lot done, and now will start drawing....my relaxation therapy.
6 comments: 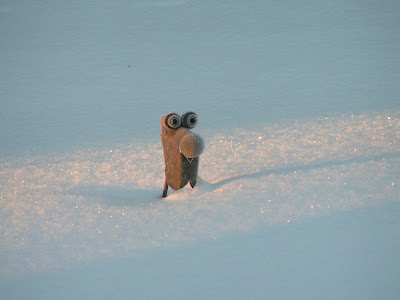 Frosty garden spike
copyright Jeanette Jobson
I've had a snow day today due to another winter storm. When I was a kid snow days were a delight and filled with the prospect of playing in new snow til you were frozen, then coming inside to warm up on homemade cookies and hot chocolate. The adult version isn't quite the same, but perhaps its what we choose. As an adult, I feel guilty over missing meetings even if it is out of my control. I still work at home with the resources that I have and never seem to fully relax until the official 'closing time' is here. 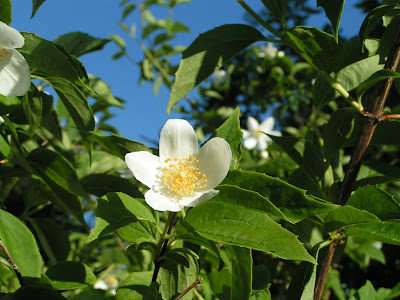 I am tired of winter with what seems to be storm after storm (another is due on Friday), so I needed a touch of summer. I looked over photos that I had taken in warmer weather, full of sun and fresh fruit and flowers. As long as I don't look out the window, I can almost pretend its summer - at least for a few moments.

But there are some benefits to ice and snow, as you'll find if you're in Chicago in February. For the entire month, Millennium Park will host the Museum of Modern Ice. Canadian artist Gordon Halloran is installing his signature ice paintings - Paintings Below Zero -both in the Chase Promenade and also within the ice skating rink itself.

Halloran first developed his idea of painting on ice in the early ’90s. It came out of his boyhood experience flooding backyard ice rinks for pickup hockey games with his brothers. “I would stand out in the moonlight and look at the reflection of the light on the smooth surface. I was obsessed with the illumination. I’ve always loved the way ice freezes, moves and forms.”

Other cities and countries take advantage of frigid temperatures and turn them into artistic and tourism related events. Quebec has a most wonderful Ice Hotel created each year that I must make the trek to see and actually stay in simply out of curiosity's sake. Or try Sweden's Ice Bar in Stockholm. Entry includes a parka,, gloves and a shot of Absolut vodka served in your very own ice glass.

Of course there is always Winterlude in Ottawa each February for the winter afficianados. Skating on Rideau Canal, ice sculptures, snow sculptures, music, people - its an experience.
2 comments: 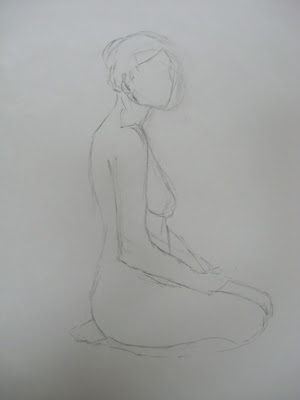 Six minutes
For the first time in over 20 years I attended a life class last night. I was a little anxious as I felt so out of practice using a large floor easel and huge sheets of newsprint. I spent two hours in hard labour, going from very quick one minute poses up to twenty minute poses and felt exhausted at the end of the session. Partially from standing and partially from concentrating hard for two hours - 15 pages of newsprint used, some both sides!

This class will continue each Monday night until June 30th and I'm quite looking forward to attending them and getting back into practice once more. However, next week, I'll tackle some crops of the longer poses and see if I can do a portrait. I also grabbed the wrong charcoal on my way out the door in the morning (I can't get home before classes so I take my gear with me to work). I ended up with hard charcoal and I prefer the medium to soft for those nice smooth lines that it produces.

Here are some of the results, ranging from one minute to twenty minutes sketches. Photos are horrible unfortunately, due to bad night lighting. I feel that I did better with the shorter poses and overworked the longer poses in some ways. I blame it on hard charcoal, fatigue and lack of practice! Next week I'll have a plan. 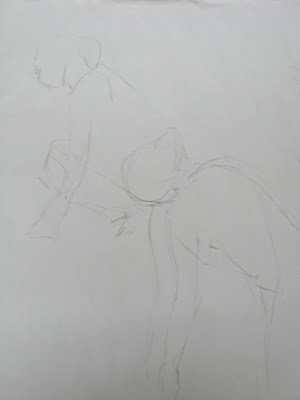 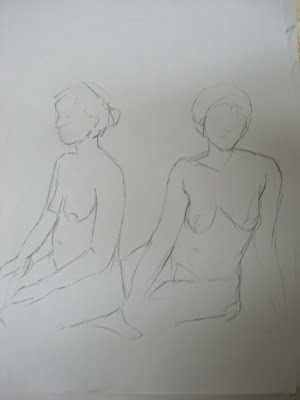 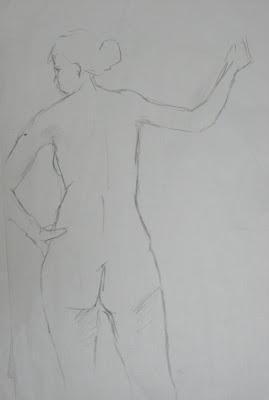 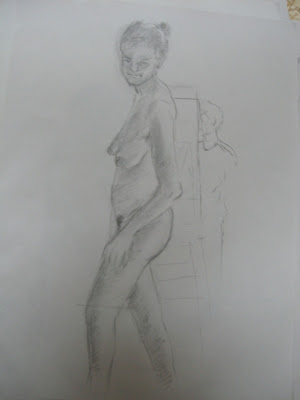 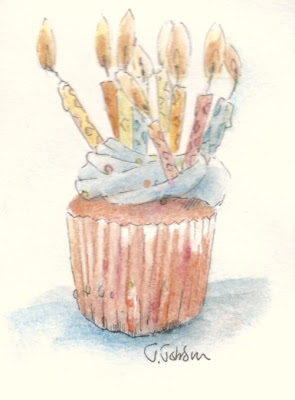 Nine
Watercolour 3 x 5
Moleskine watercolour notebook
copyright Jeanette Jobson
There are nine people I know who have birthdays in January. I think its a plot to make me bankrupt or increase the profits of the greeting card manufacturers. Either way I've partially solved the problem with my nine-in-one birthday cake. Low fat, low calorie, eat as many as you like and there will always be more cake! And.....best of all - its free!

Happy Birthday to all my Capricorn and Aquarian friends. May your year be everything you wish it to be.

Now blow out your little inferno and make a wish!
4 comments: 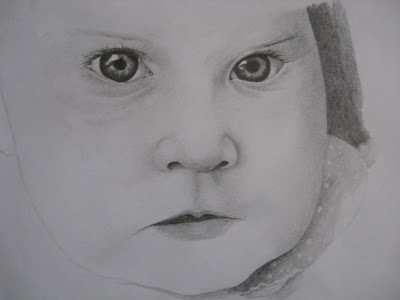 Another snow day gave me a little time after teaching to add some more details to this baby drawing. I'm not pleased with it as the features are skewed so it will be abandoned to the 'experiment' drawer and I will have learned to step back from my drawing to review it from time to time. The drawing is salvageable, but I don't think I'll pursue it. It started more as a doodle then grew.

In my last spending spree in the USA I stocked up on all the art goodies that I can't obtain in Canada. One of those things is Bristol 500 plate paper. I haven't been able to access this smooth surfaced paper in Canada. I can get Bristol smooth or vellum - the 300 series, but not the 400 or 500. I tucked it away in my cupboard and it slipped my mind til I rediscovered it when putting the unfinished baby to rest.

its about time that I started a new portrait in earnest. My grand daughter will be a year old in a week and I'd like to create a portrait of her to celebrate. (Provided my daughter comes up with a more recent photo to work from...hint, hint...) This plate finish Bristol should be the perfect surface to do a baby portrait. Plate (Hot Press) is unsurpassed for fine pen and pencil work, allowing flat and even washes.

A lot of my time is spent creating drawing lessons, but finally I have got enough under my belt to start to recycle some of them so it means less prep time for when I do teach. My time teaching goes fairly quickly, depending on what we're doing and I always learn something new from the kids.
2 comments: