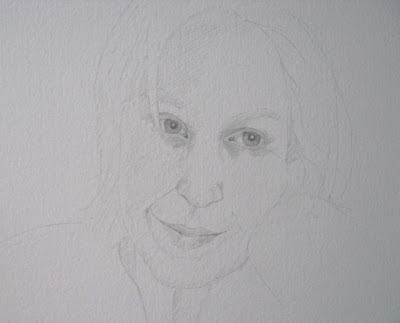 This week has been so so busy, I barely have time to breathe so not a lot of time has been dedicated to art. Oh I have a lot of ideas floating around in my head. They come to me while driving quite often, as my commute is about 30 minutes each way. Its a good time to think and plan at the beginning and end of the day.

Most of my work this week has been starts of pieces, thumbnail sketches and snippets of drawings on sketchbooks or pieces of paper that are lying around. I have been fighting with a painting for most of the week, but its not doing as I want it to. I dot paint on it most days but it just won't come around yet.

So in times like this, I draw whatever comes to hand or whatever brings me comfort in terms of art. For me, its drawing eyes. Why? I really love drawing eyes, I always have. So this is where this start of a self portrait came from. Its unlikely it will go further - or not at this point as there are design faults that I can't be bothered to fix as it would mean a major redo.

Fatique takes its toll on drawing ability. I find I can draw best first thing in the morning. If I wake very early - 4 or 5am - and get up, its amazing how the pencil or brush flows. Tiredness affects my ability to think and to produce anything worthwhile.

But tomorrow I have a board meeting all morning, then the usual chores, so its unlikely I'll be able to devote a lot of time in the studio til late in the afternoon. Perhaps a nap first might be in order! 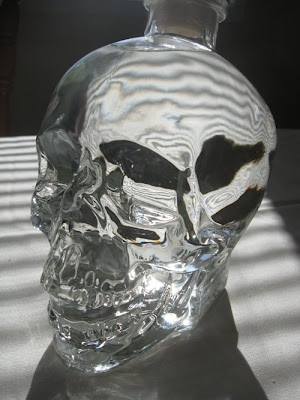 And now the macabre and strange that is sitting on my dining room table. And no, I haven't tasted it yet. I just like looking at it and anticipating a drawing with light through the glass.

Crystal Head Vodka. Designed by John Alexander and manufactured by Bruni Glass of Italy, the design of the bottle celebrates the mysterious legend of the 13 Crystal Heads found around the world and mentioned in the last Indiana Jones Movie. The 13 Crystal Heads are believed to be of ancient powerful origin by some, or a Victorian archeaological hoax by others.

"Unlike most vodkas in today's marketplace that use additives, glycol, citrus and sugar to improve smoothness and flavor, Crystal Head Vodka is a pure spirit with no additives. It is quadrupled distilled and filtered three times through charcoal followed by triple filtration over Herkimer crystals from one of the planets rarest deposits of close concentrated semi-precious stones" said Aykroyd. The vodka is distilled by the Newfoundland Liquor Corporation and uses water sourced from the Province's deep aquifer glacial pools located over a thousand miles away from major sources of continental pollution.

Aykroyd is working with a leading US importer, The Infinium Spirits division of Wilson Daniels to market Crystal Head Vodka in the US. Crystal Head Vodka, which will be available initially in California, Texas, Nevada, Louisiana and Florida will retail for $49.95 per 750 ml bottle. 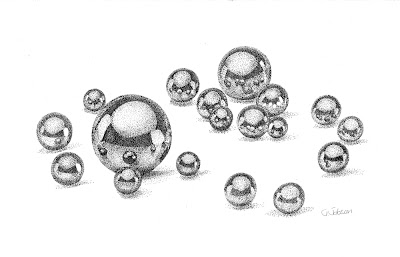 When I started an anatomy course years ago, the initial thought terrified me even if I wanted and needed to do the course. All those body parts and systems and interactions and names. How would I ever figure them out, let alone get them correct in an exam. But I did and did well with it.

This like many things that are unfamiliar to us seem daunting and are simply perceived as difficult. Once they are broken down into smaller parts and the understand becomes clearer, our comfort level increases and with it, our ability to function and perform within a particular area. The same applies to art. 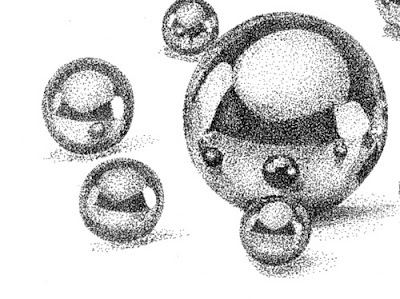 There was a point when I was scared to death of using pen and ink. It seemed so permanent and unforgiving. I couldn't erase it and hide my mistakes.

Then I plucked up my courage and started playing with ink and different pens and discovered that it is a lot easier than initially imagined. This technique of pointillism is quite time consuming, uses a fine nib and, to me, is a very relaxing, soothing method of creating an image. I am by no means an expert in it, but I enjoy the process.

This piece was started some time ago and I rediscovered it during a clear out of a cupboard. I can still see a few areas that need tweaking to create perfect spheres, but for the most part its done and it makes me want to start another piece using this same technique. 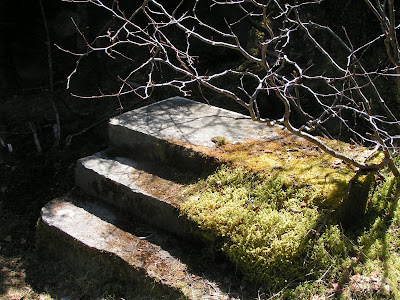 Steps to Nowhere
I am sharing this image under the Creative Commons license. (see sidebar)

This is an image of some steps that once led to a home in the now abandoned settlement of La Manche. The isolated fishing community was resettled in the 1960's after severe storms wrecked fishing stages and buildings.

These steps are being reclaimed by nature with trees and moss blending them into the forestscape. 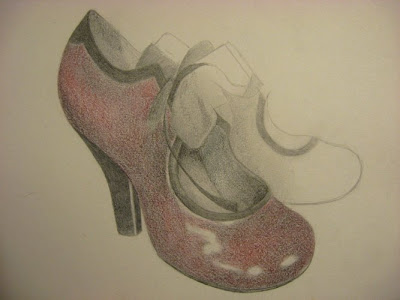 I started this drawing as a doodle then got caught up it in. The shoes were done in graphite, but begged for colour so I put in a layer of watercolour pencil that was handy. I'll continue working on it, purely for pleasure as this is a sketchbook piece and is originally this week's drawing challenge on WetCanvas. I loved the shape and lines of the shoes.
8 comments:

A peek into a sketchbook 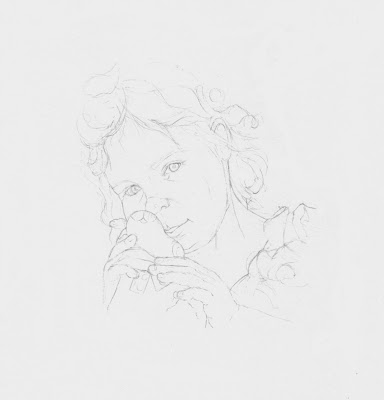 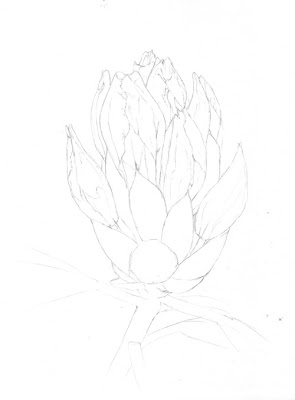 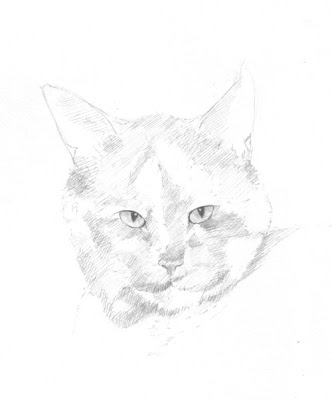 Between painting and full drawings, I sketch a lot and have sketchbooks scattered all over the house, including beside my bed. I also carry one in my handbag and have one tucked in a drawer at work.

Sketches can be from life, from memories, from illustrations or magazines or photos that I see. As long as it keeps me drawing, that's all that counts.

I enjoy looking back at sketchbooks and reliving memories and seeing people that I have sketched. The pile of books rapidly accumulates and is added to with scraps of paper that I sometimes end up drawing on when there isn't a sketchbook immediately to hand.
3 comments: