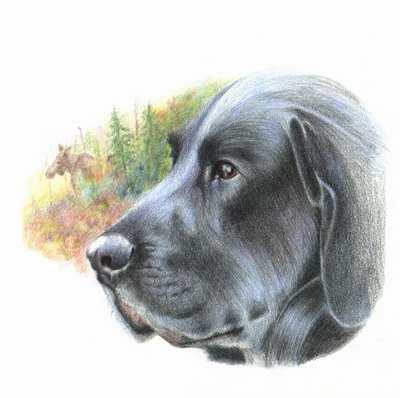 In creating the background for this dog, I wanted a soft, misty effect of bracken and woods. The appearance of a moose in the garden the other morning was the inspiration for the moose in the background of this drawing. It's been called the 'Where's Waldo?' drawing by people now as the moose image sort of sneaks up on you. I may make it softer yet as I don't want it to compete with the dog for attention.

I'll leave it for a week now and go back to it for tweaking it then. It will be another drawing that will work as a marketing piece.
1 comment: 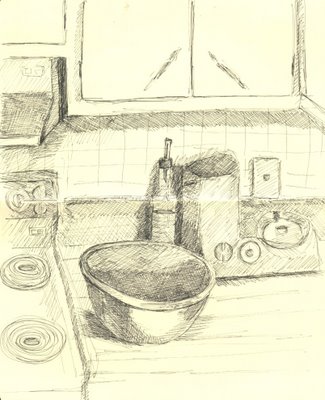 My kitchen has had the first injection of new life into it since most likely its birth 25 years ago which is the age of the house. A dishwasher.

I have lived for the last 6 years without a dishwasher and almost think there is something soothing about washing dishes sometimes. However a dishwasher does hide a multitude of messy dishes and lets me pretend that I'm a good housekeeper.

The drawback is that you lose cupboard space to install a dishwasher and some drawer space too. In addition there is a gap between the cupboards and the machine so the pots and pans gleam innocently out of the gap. So, a new kitchen will have to be fitted around it to make it match up. Living in the house while that happens isn't the pleasant option. I'll deal with that road when I come to it.

For now, I have squeaky clean dishes and a clear counter and sink. Little things...

PS No, the bowl on the counter doesn't have a wonky ellipse. The bowl is eggshaped. Yes, really. Pale blue, ceramic and weighs a ton. However, the ellipse on what is supposed to be the flat receptacle for the mixer to the right IS wonky - in fact most of that machine is wonky. I can't have a dishwasher and be perfect all the time.
2 comments: 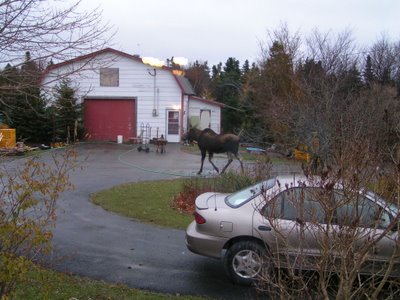 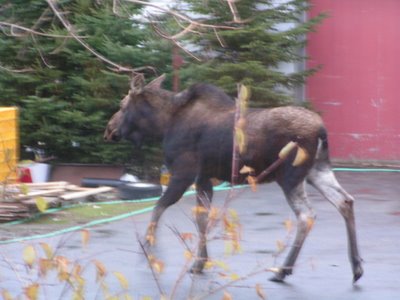 You never know who will drop by for breakfast on the farm. At 7:15 this morning, this cow moose was initially in the back of the house then a few minutes later strolled slowly up the driveway,long enough to get a couple of photos then ambled off to the field and the woods.
2 comments: 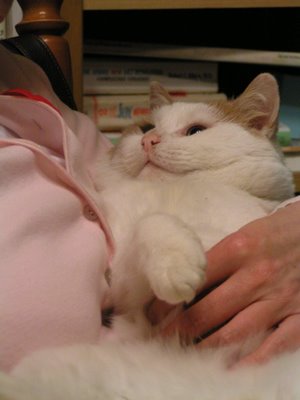 Here's Tripod, the feral cat that adopted me two weeks ago. He as turned from a timid, nervous cat who bolted food and bolted from humans, into a wuss.

He loves to be held twice a day, morning and evening. Not on your lap as a regular cat would, but literally held, like a baby. He lies there motionless and purrs while staring into my eyes. Its so odd. He's a very unusual cat who seems to have adapted to the indoor life seamlessly. 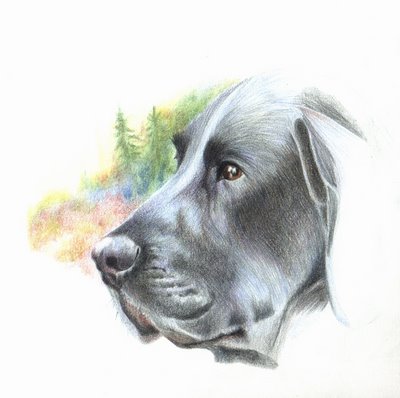 At the risk of having a cat and dog in the same post, I'll add the update to the coloured pencil drawing that I am doing of the black lab. Its slowly coming together. I'm building colour layers in the background and on the dog. But still a lot more to go yet.
5 comments: 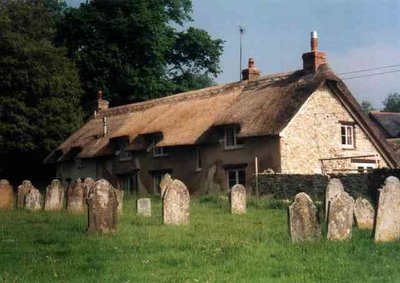 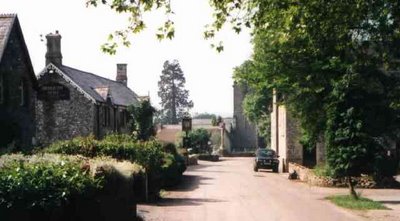 In the early fall of 1978 I packed a two year old and the essentials of life into a Morris Minor Traveller and started the drive down the motorway from London to Upottery in Devon. I was about five or six months pregnant. The moving truck would arrive a week later and in the interim I stayed at a bed and breakfast in Chard in Somerset with my daughter. My husband at the time was travelling somewhere in the world as the oil industry took him away for about nine months out of twelve.

I had leased a cottage in a village in Devon, wanting to escape to the countryside after the bustle of London. Even on the edge of London, the activity level, noise and crime pushed its way out and affected how I lived. It seems that Lord Sidmouth had the same idea about one hundred and thirty years before me and I was headed to the same village as he was - with ties to the same land as well. All without my knowledge of the history that went before me.

Upottery lies high up the beautiful, pastoral Otter valley, between two great fingers of the Blackdown Hills and has now been declared a area of natural beauty. The manor, together with that of Rawridge across the river, was bought by Dr. John Addington of London in the later years of the 18th century. His son, Henry Addington, Speaker of the House of Commons, Prime Minister 1801-4, and later 1st Viscount Sidmouth, built a mansion and occasionally resided here. One cannot imagine a more complete change than this from the cares of London and the political world. The present Manor House was built about 1845.

I discovered the tiny village of Upottery after many wrong twists and turns on narrow country lanes. I moved to Manor Cottage which was an old thatched cottage, originally a tied cottage most likely for the Manor House and farm. It was a classic old house with uneven walls, very low ceilings and original slate floors. An AGA was the only form of heat aside from a portable electric fire and a fireplace in the living room.

To gain access, I had to meet 'the Colonel' and his wife and run the gamut of questions round a kitchen table surrounded by the remains of their teatime with a large sticky flytrap hanging overhead. I remember distinctly keeping one eye on the flytrap, fearing that one of the buzzing trapped flies would extricate itself from the sticky mass and fall onto the plate of sandwiches or cakes below.

Later that evening the Colonel's daughter came by to see that I was settled. She was an actress who mostly stayed in London - I forget her name - and judging by the lack of credits to her career, so did most people. She was intense in an irritating kind of way with probing questions that disturbed me. I had started to wonder quite what I had let myself in for there.

But it turned out mostly for the better. Life in the little thatched cottage had some unique aspects and village life was friendly. Attached to the cottage was a long building, known locally as the Justice Hall. It was where justice was handed out to servants of the Manor House supposedly, but in those days was accessible through a door from the cottage kitchen. The room was large with high windows and wooden floors. Along one wall was a very large inglenook fireplace and the only other piece of furniture was a dolls house that stood as tall as I am and that could be opened like a door to look inside. There was no furniture or dolls inside, but it always fascinated me and my daughter. On rainy days when her energy levels surpassed mine, I would take her into the Justice Hall and let her run laps around the room while I explored the dolls house. Unfortunately I have no photos of that space or the dolls house, only in memories in my head. Perhaps I'll translate those into drawings one day.
4 comments: 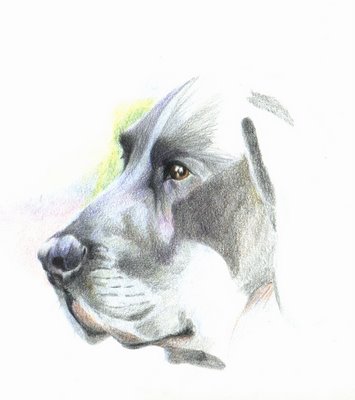 I managed a little more work on the dog portrait tonight. Its a work in progress for a group that I moderate and will be a marketing piece when finally finished unless I find a home for it before then.

I've added some more layers of blues, purples and greys with a bit of pink and henna to add warmth to the fur. Its a slow process and takes time.

The nnose isn't quite right yet, so I'll concentrate on that and get the shading right before I go much further. Its all still at the ugly phase and I'm working hard to see past that into the future. 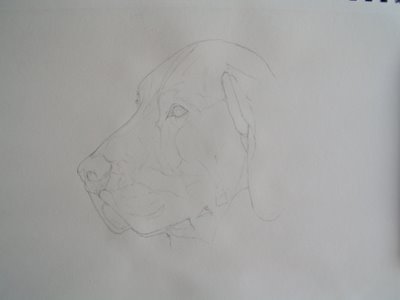 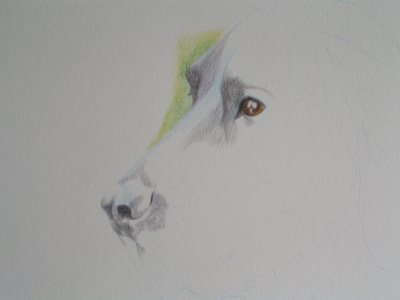 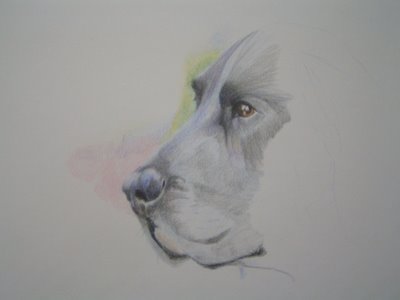 I began a drawing of a black Labrador dog today. it will be completed in coloured pencil - Prismacolors - on Stonehenge paper.

Here is the initial drawing and the first two stages of progress. I wil post more as it moves along. Its rather at the 'ugly' stage about now so I try hard not to see that in case I turn it into a firestarter!
2 comments: 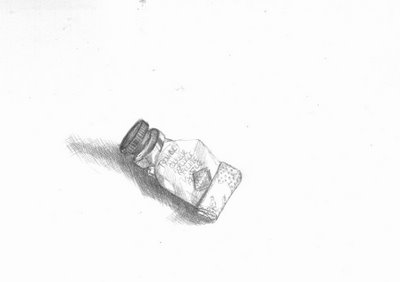 Today has been one of frustration for me. Problems with a art forum that I was moderating continue to reinforce my wonder at human nature and its frailties. Personality clashes and egos abound, so I have withdrawn and left them to it.

I am doodling more than drawing today and this is the result. A small graphite drawing of an old friend. I found a very old set of paints in a box the other day. Most are dried up, crumpled tubes that would take a vicegrip to remove the caps. But there is something appealing about them - the shapes, the reflections of light.

I find myself in them. I find the past and remember old paintings. I can't throw away old friends.