A touch of sun 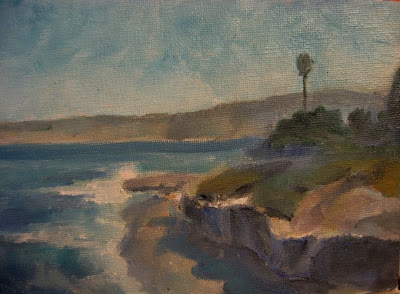 La Jolla Cove, San Diego
5 x 7 oils
We don't seem to have seen sunshine here for a week or more and I was craving it when everytime I looked out the window it was snowing again.

This reference was in the All Media Art Event on WetCanvas and it spelled summer to me. So I pulled out my oils and a small canvas and this was the result after about an hour. After investing a some new flat brushes, it almost became an 'aha' moment using them to place values in this painting. Things just seemed to flow for the rest of the day art-wise. I'd better take advantage of that flow before it disappears again!
4 comments: 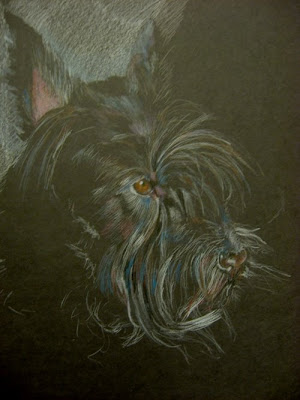 Bruce
coloured pencil 9 x 12
I usually don't like drawing really hairy dogs. It is time consuming and ends up being confusing. However, letting the paper work for me helps a lot, as it did with this loose portrait of Bruce, a Scottish terrier. These terriers are sweet dogs, if not a little stubborn and somewhat protective. 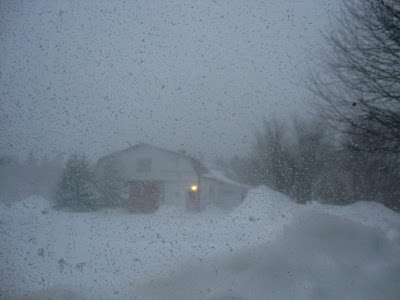 Another snow storm greeted me this morning, worse than the other day and this was the view out of my studio window at 7am. Are we seeing a pattern here?? I waited til 11 or so to head to work and by that time the snow had changed to rain and the roads were rapidly clearing. How many weeks of winter are left? Anyone want to do a house swap??
9 comments: 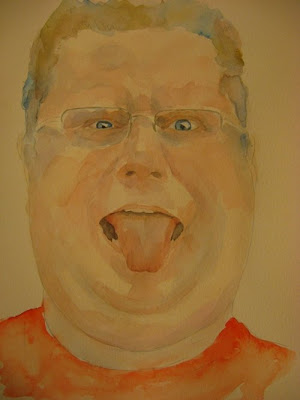 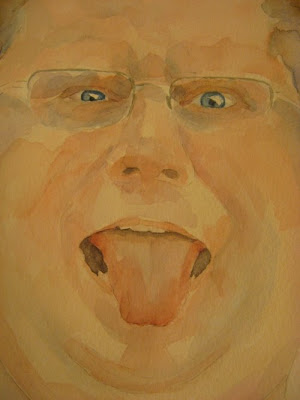 Kevin WIP
11 x 14 watercolour
I've been adding a few layers in watercolour to my portrait study group reference. I am too timid with watercolours and need to do something large and loose to break my habit of small and tight. I'm slowly building the colour and shading in the face and am wary that I don't do too much and make it muddy, yet not enough to make it look insipid.
4 comments: 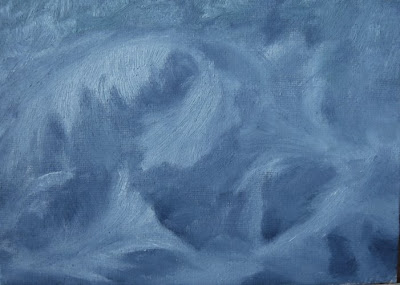 Frost study
oils 5 x 7
Its been a snow day here with a raging storm throwing down snow and blowing it around in 100k/hr winds since the wee hours. Most of the city has been shut down but its due to stop by the morning and things should get back to normal again after close to 30cm of snow is down.

Frost on windows is a rarity these days with insulated houses and efficient heating. I remember as a child frost was very common on the inside of windows on cold winter mornings. I loved the patterns that it made, like feathers or ocean waves. 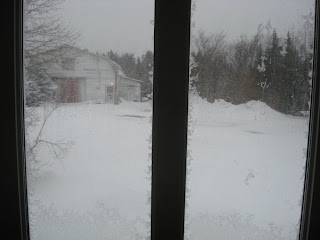 There is a long back porch on my house that houses feed and wood and potatoes and the window of the screen door occasionally has the right conditions of moisture and cold air for frost. The other morning, the planets were in alignment and frost patterns were there.

I took a photo of the patterns, as they are short lived once the sun comes up, and this morning with the storm outside, I did a study of frost patterns. I think the patterns would translate well into graphite, painstakingly slow, but lovely when done.
7 comments: 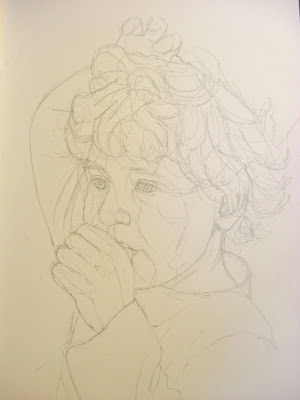 I'm in the throes of a larger oil painting but when I find a few minutes to spare I still draw. Its almost reflex action at this point. This was a little sketchbook drawing that will be the basis of a larger piece. Its a friend's daughter who sucks her thumb and twirls her curls at the same time. Its adorable.

I don't know about others, but I have pieces of unfinished art or jewelry in various stages in various rooms of the house. This past weekend I gathered them up and brought them to the studio as I'd bought a new storage unit to house the waifs and strays. 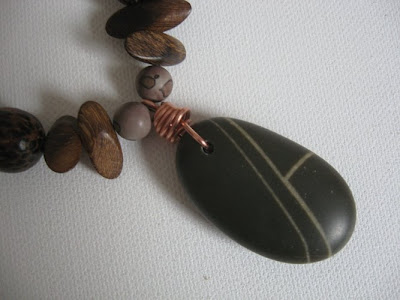 This is one of the jewelry pieces that is now on Etsy. I used a lovely stone that I found on the beach locally. The lines going through it couldn't have been better designed and remind me of art nouveau designs, so simple and clean.
11 comments: 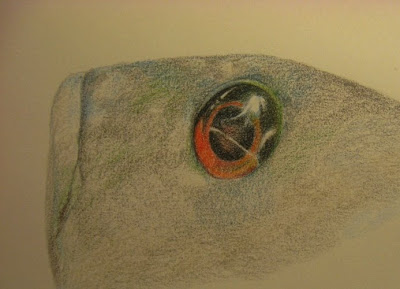 Fish eye study
coloured pencil 8 x 5
The glassy eye of this fish attracted me as did the textured skin. Greys, blues and greens with that firey eye. I couldn't resist a small study of it. I'm not even sure what the type of fish is, some sort of perch I think.

I enjoy the process of drawing and seeing if I can produce textures and patterns. The challenge is endless. 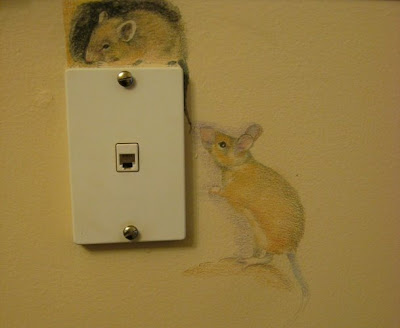 Meanwhile, back in the studio, mice start to breed... I wonder when the cat will notice?
14 comments: 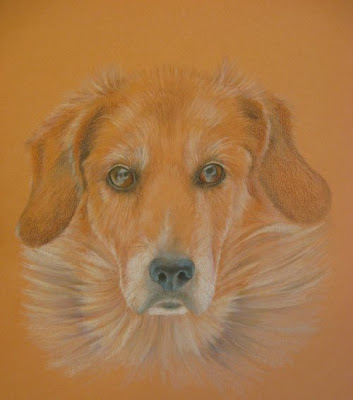 I started this piece back in November as a work in progress, then got waylaid by other projects. This portrait is of my dog, Biscuit, who died about 3 years ago at the age of 16.

He had amazingly thick fur and a ruff of fur around his neck like a lion's mane that always made him look like he was wearing an Elizabethan collar. You could sink your hand into the fur and it would cover your hand completely. That probably explains why so much of it was on my sofa!

This piece was done from a photo taken while he sat in a snowbank the winter before he died. On close inspection while drawing his eyes, you could see the reflection of the living room window in his eyes. He'd watch carefully for signs of movement then rush to the front door to be let in.