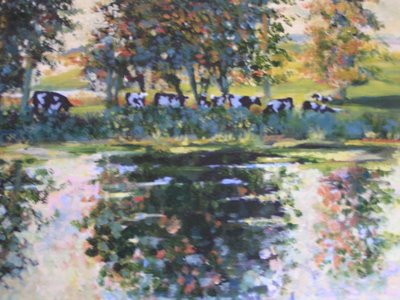 Many years ago when I lived in Somerset I travelled around a lot in my job. The Somerset Levels was one section of the country that I travelled through at least once a week. I loved the willows that grew there and how they were harvested for basketmaking. The industry is celebrated in the form of the Willow Man (sometimes known as the Angel of the South), a 12 m (40 foot) tall willow sculpture by artist Serena de la Hey that can be seen from the railway and the M5 motorway to the north of Bridgwater.

I loved the shapes of the trees and the shadows and light that played around them and the marshes. This image was one of those views of the Levels, painted in acrylics quite a long time ago, but it always brings the image of those drives and views into sharp focus for me. Unfortunately the image isn't great quality. Low light levels this time of year cause havoc with photographing art.

I've spent the last two days (yes Saturday) in meetings. They were lengthy and wordy and filled with people I didn't know but I survived and came away with what I wanted for the organization I work for. Working for a volunteer organization can be a challenge as meetings do tend to be outside working hours. Overtime doesn't exist and resources are limited. However, I've done it for so long that the hardship becomes part of the experience and spills over into real life at times.

I have been so busy this week that I haven't had much time to devote to drawing or anything related to life on the farm. I have a few sketches completed but nothing more. In weeks like this, I feel distincly deprived when I can't draw as much as I like. I miss that chance to get into 'the zone' and escape. I still have to start on the set of oil paints that I bought and I lie in be dat night and think about those tubes of paint - their colours and the buttery texture. I want to smell turpentine and linseed oil and get paint on my hands and on the old shirt that I wear when I paint. As hard as you try, you always (or I do anyway)manage to get paint on your clothes. You touch something or absentmindedly run your hand through your hair and you are transformed into a multicoloured zebra. Its part of the charm.

Tomorrow I will draw and paint. Something, anything.
5 comments: 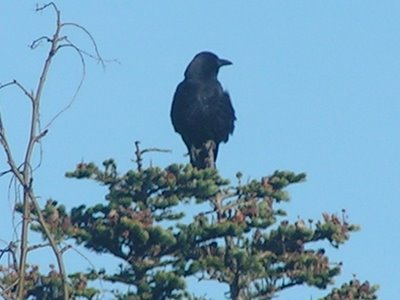 Crows are a constant around the farm and to be honest I don't really mind them. They can be a bit noisy around the time they have young with them in early summer but they mostly keep to themselves. They have a buffet of mice from the barn that are caught in traps. Its a bit like feeding the mafia and in return they don't cause problems. 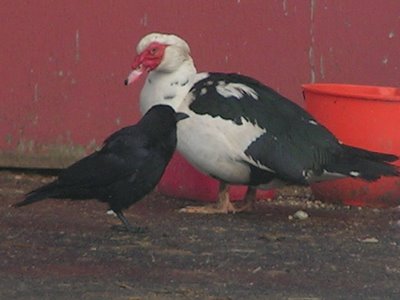 The ducks and geese tolerate them usually to unless they get too close to their food, even them some days a blind eye is turned. The crows do act as sentinels and I can tell from their calls when a hawk is around. They act as an early warning system and send the other smaller birds flying for cover when danger is around. 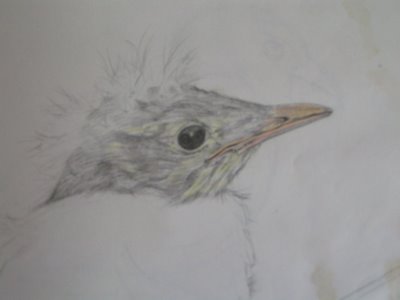 The sketch however, is of a baby robin, mostly graphite with a touch of coloured pencil. The funny little face was too hard to resist. And completed, if my records are correct, 24 years ago. 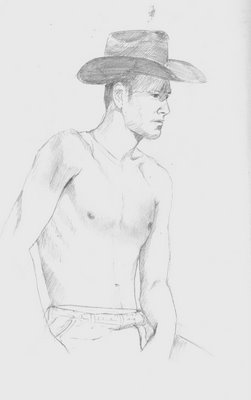 This is a study of a young cowboy done for a weekly drawing thread last week. He looks rather undernourished to me and I can't see him wrestling steers or heaving bales of hay without keeling over. But I guess he wasn't chosen for the purpose of profiling the real cowboys of the world. I think this is more the San Francisco version...no hate mail from cowboys in SF please. 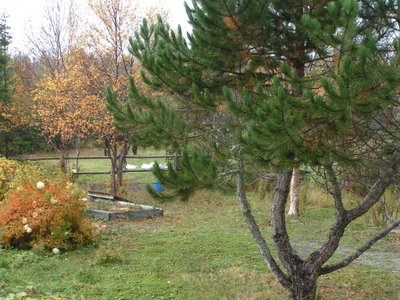 I happened to look out the dining room window and noticed that the Embden geese had gone into the field with the horse who was grazing there. The horse quite likes the geese and often spent time looking over the fence into their pen, much to their horror at the time. But they got used to her and she never harms them so they hang out together in the field sometimes.

The changing colours of the leaves and the peace of the animals together is always warming. This is also the view I see from the studio that I work in, just on a higher level.
3 comments:

Sometimes they find me 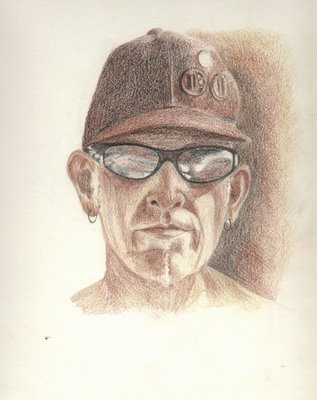 I have done some work on the first portrait. I used Derwent Drawing pencils and though the sunglasses aren't quite what I want, its ok. It isn't a commission, but I still demand things of myself. We all have exacting standards in art for ourselves, don't we? I think the next portrait will be done in watercolour. I just need time to do everything that I want.

Then along came a surprise. There has been a feral cat, or supposed feral, who has appeared off and on for a year or more, hanging around the barn. The cat is missing a front leg or rather the paw portion to the 'knee'. It still moves well but hobbles and has to remain on the ground as its ability to jump up on objects is limited. In the last few weeks, its been given some food which it wolfs down, constantly looking over its shoulder as if something is going to seize the food. The cat will not let anyone within 10 feet of it and bolts if you move suddenly or come near. Til today. 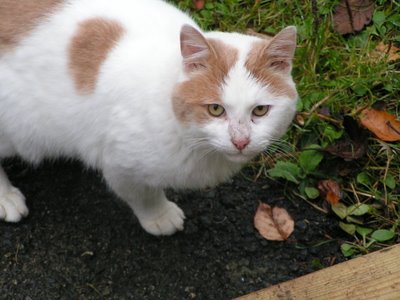 I came home from work to see the cat sitting on the steps with the two Muscovy ducks at the bottom. She quickly moved down the steps as I got out of the car then stopped. I moved very slowly towards her (I'm saying her, but I'm not really sure at this point it its male or female) and she finally came over and sniffed my hand then nlet me stroke her. Its as if a floodgate opened and she couldn't get enough stroking. She leaned into my hand, head butted me, and purred like a diesel engine. But she was still wary. She looked as though she wanted to come into the house, but was so timid. Perhaps over a period of time she will get braver and venture in. 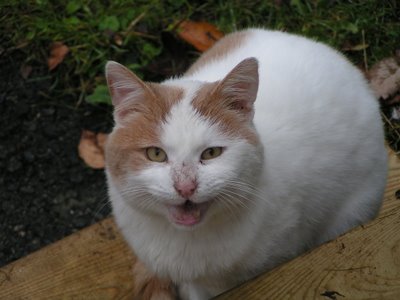 She loves her food however and has the loudest voice I have ever heard on a cat! Each picture I tried taking of her, she was vocalizing so most images are like this one.

So because of the three legs, I've nicknamed her Tripod. Silly I know, but it seems to suit her. My own cat died 10 months ago after 18 years and I said I wouldn't have another inside animal. Seems I may be wrong. Sometimes animals find me instead of me finding them. More drawing material... 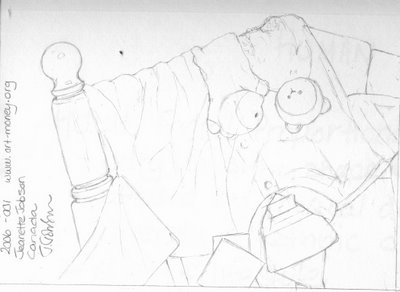 Then the next day I did it again.

I wandered into a baby clothing store and bought teeny tiny baby clothes. I laid them over the back of a dining room chair and just stared at them, imagining them filled with a small warm body. I think the concept of grandmotherhood is sinking in. I think I will also be in debt before the child is born...

It is the first test piece for art money. I'm sure more will complete the diary of my journey through this new step in life. 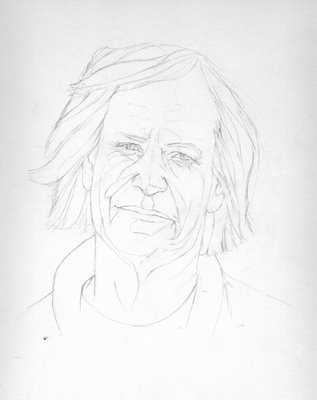 Meanwhile, to snap myself out of it, here is the third value map drawing of the portrait trilogy that I started this weekend. I started adding colour to the first portrait last night and tonight. I'll post an update tomorrow on that. 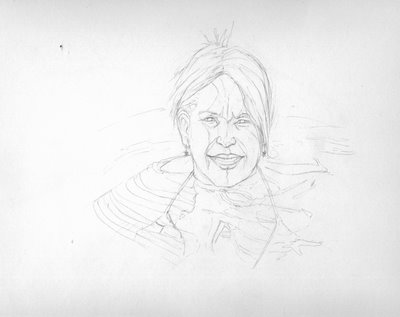 Just as ACEO's have taken over the art world, I was sent a link to something that seems a little similar, but with a twist. Its becoming legal tender. Art Money. The concept is rather interesting so I've signed up for it and will produce the entrance fee of three 4 3/4 x 7 inch pieces of art. Larger than ACEO's they provide more room to express myself and expand details. Details of what needs to be on the art money, how to apply and how to participate, is found on BIAM's website.


The purpose of BIAM is

* To offer artists worldwide the chance of financial freedom and worldwide exposure in order to focus on the creative process in the pursuit of a beautyfull world.
* To integrate an alternative global currency with local currencies world wide as a setp towards equal shopping conditions for rich and poor reguardless of the conditions of the local social environment in the persuit of a world of individual choise and personal freedom.
* To create an art object with a pratical social application. Using art money to pay for private accomodation will bring people together in an intimate private situation. This may offer the chance for new friendships among strangers from all over the world. This currency may as such function as a human link across cultural, racial, linguistic, political and religious barriers in the pursuit of a peacefull world.

Seven rules apply to the production and use of art money

1. Art money is created by artist’s registered in BIAM. Each artist can issue an amount equivalent to the value of own art production.
2. Art money measures 12x18 cm (4 3/4 x 7 inches). All durable materials can be used. The bill shows serial number, year of production, www.art-money.org, nationality, artist readable name, artist original signature.
3. Art money must be an original work of art and show a visible sign of the artist’s physical work.
4. Art money starts at a value of 27 Euro and increases by 5 Euro per year for 7 years. The increase in value can be used only when purchasing art from art money artists.
5. Art money is guaranteed to buy art and services at registered BIAM artists for up to 50% of purchase price.
6. Art money can be used as a means of payment in registered BIAM shops and industry in respect of the individual policy of the business. It may well be used other places where accept is found.
7. Art money can not be exchanged back into cash from the artist.

I have included the second of the trilogy of portraits that I am creating here. Today I will start the colour process.