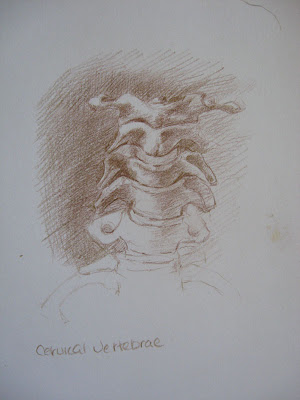 Years ago I studied anatomy for a year in my course as a herbalist. Starting out, the subject was fairly new to me, the names of bones, organs and bodily systems all sounded peculiar and their complex function even more so. I thought I'd never get it straight in my head. But I did.

There is a perceived difficulty in trying to learn something new, whether anatomy or drawing and it can be overcome if you take it in small steps and look at it logically. Like any skill, it is learned by repetition, practice and practice and repetition. You have to eat the cold porridge.

Eating cold porridge. I've seen the expression and finally tracked it down to a book by Tony Parsons - One for My Baby.

'You must eat the cold porridge,' he told me once.

It's a Chinese expression. Cantonese, I guess, because although hecarried an old-fashioned blue British passport and was happy to call himself an Englishman, he was born in Hong Kong and sometimes you could tell that all the important things he believed were formed long ago and far away. Like the importance of eating the cold porridge.

I stopped what I was doing and stared at him. What was he going on about now?
'Eat the cold porridge.'

The way he explained it, eating the cold porridge means working at something for so long that when you get home there is nothing left to eat but cold porridge.

To become the master of something, you must eat the cold porridge. 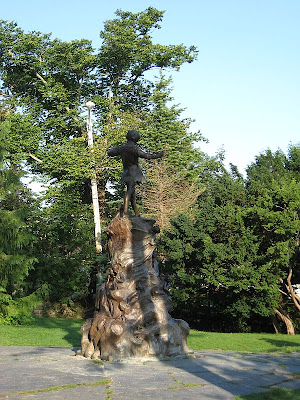 Peter Pan statue
Bowring Park, St. John's, NL
Early on Sunday morning I went to Bowring Park in St. John's to take some photos in that light that only the morning can provide. By the duck pond there is a Peter Pan statue which I remember as a child and which is a magnet for every child who sees it. The animals are worn smooth by small hands caressing them - and larger ones too.

There is an interesting story behind the statue which was commissioned by Sir Edgar Rennie Bowring in memory of his grand daughter who died at sea. The plaque reads "In memory of a little girl who loved the Park" and was unveiled on Aug. 29, 1925. The little girl who loved the park was Betty Munn, daughter of John Shannon Munn and Alice May McCowen. Betty and her father were lost in the wreck of the Florizel, a Bowring Brothers ship which was destroyed on the rocks off Cappahayden during a winter's storm on the night of Feb. 23-24, 1918. They were on their way to New York to rendezvous with Betty's mother who was already there. Betty Munn was three and one-half years old. 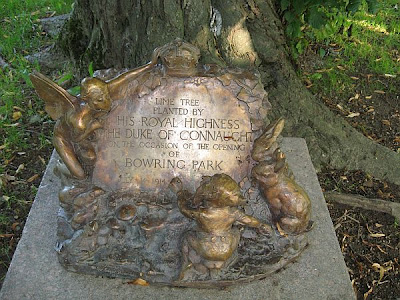 Bowring Brothers Ltd donated Bowring Park, three miles from downtown St John's, to the people of the city in 1911 in celebration of their 100th year of business in Newfoundland. The Duke of Connaught officially opened it on July 14, 1914. Sir Edgar Rennie Bowring was a businessman, politician and philanthropist, a partner in the family business, Bowring Brothers. Among the firm's interests was shipping and one of their vessels was the Florizel. 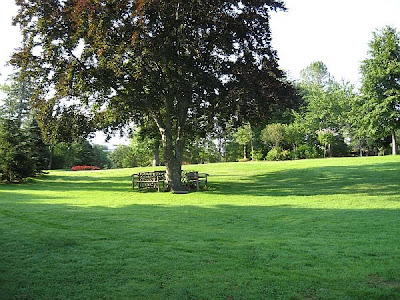 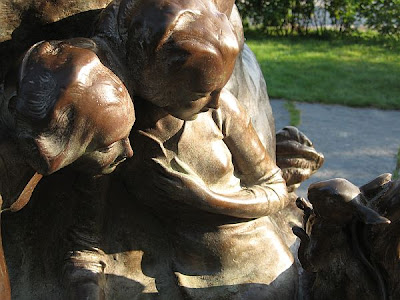 Based on J.M. Barrie's immortal character, Peter Pan, this bronze statue features Peter standing on a tree stump playing a flute (supposedly a set of pan pipes) whilst a collection of fairies, rabbits, squirrels and other little creatures adorn the base. The main fairy is believed to be Tinker Bell reaching towards Peter. Frampton described his masterpiece as follows; "The animals and fairies on the statue are listening to the Pipes of Pan, one of the mice is completing his toilet before going up to listen to the music, and the squirrel is discussing political matters with two of the fairies." 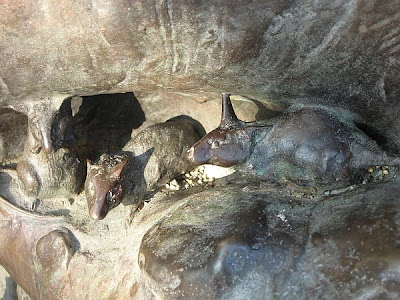 The seven statues are located around the world: 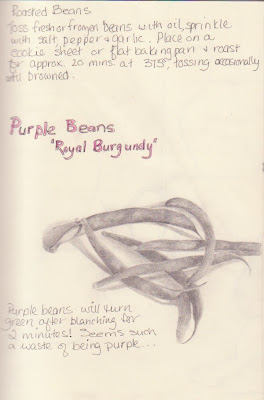 The growing season is short in Newfoundland, so harvest tends to be late August, stretching into October. I've been growing some heirloom vegetables this year, both in the greenhouse and the new vegetable garden with mixed results. Chioggia beets, purple carrots, cherokee and zebra tomatoes as well as a host of potatoes varieties from banana to Irish Cobbler are all slowly maturing and I sneak a few here and there to try. They're fabulous!

The weather this summer has been beyond awful with a lot of cool, wet weather interspersed with incredibly hot, humid weather. Neither seemed to have done the plants much good. However the beans seem to have thrived despite the conditions with bumper crops of green, yellow and purple beans being harvested, blanched and frozen as well as eaten what seems daily lately, along with the ever present zucchini.

The purple beans 'Royal Burgundy' are stunning visually, being almost black they are so dark, but unfortunately turn dark green once you cook them. I grabbed a handful yesterday and did a sketch of them in my Moleskine. I added my super quick recipe for roasted beans. You can use green, yellow or purple beans for this but be warned, they are addictive!
3 comments:

What warms your soul? 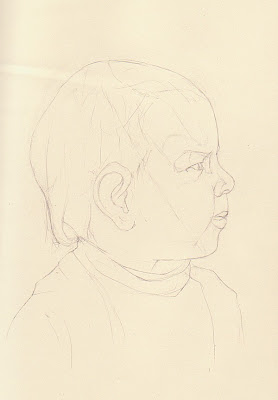 My muse is prone to taking a leave of absence lately without consulting me much. He leaves me to flounder and wander, looking for inspiration until he returns. This is one of the pieces of inspiration that I found and one that warms my soul.

What warms your soul? For me, it is the moment that I know I have uninterrupted time to produce art. It is that moment when I have my supplies at hand and finally sit down and can start drawing or painting. There is something so overwhelmingly comforting about that time, its difficult to put into words.