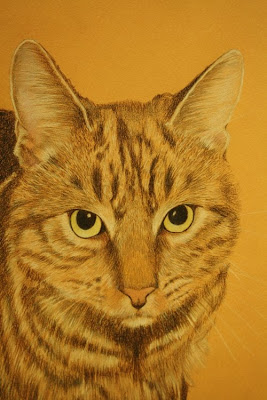 I've spent time off and on today finishing up this puss.  She's a lovely cat, as most tabbies are.  Those markings are so distinctive and time consuming to create. I loved the perspective of this piece looking down on the cat and the foreshortening.

All domestic cats have the tabby patterning gene apparently, originating from the African wild cat.  The pattern is a camoflage which works well in a treed environment, but in most domestic situations is fairly irrelevant for stealth and is more decorative.

The dark lines running from the eyes toward the back are called the 'tabby mask' also known as an "M" with several folkloric tales around their origin. Besides striped tabbies (called 'mackerel', like the fish.) there are blotched tabbies, spotted tabbies, and ticked tabbies. 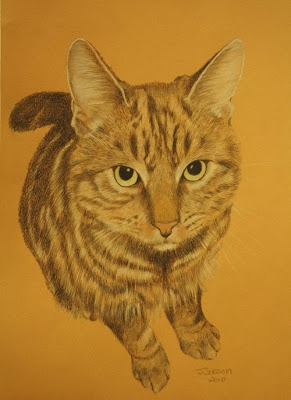 The name tabby is believed to have come from the word atabi a type of silk spun in the Attabiah region of Baghdad. This silk was exported in large quantities to the British Isles where it was noticed how similar the stripped pattern was to the coat of the tiger cat.  These tiger cats soon started to be called tabbi cats and later tabby cats 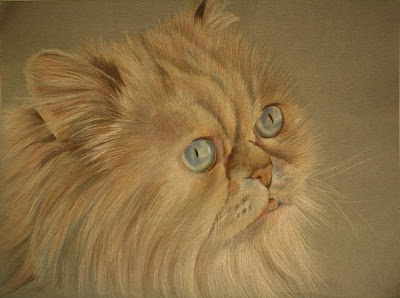 I'm pushing myself to get these cat portraits done for the client as there are more pieces in the wings waiting.  And, of course, I'm sure the person would like to have them as soon as possible, as we all do when we order something. 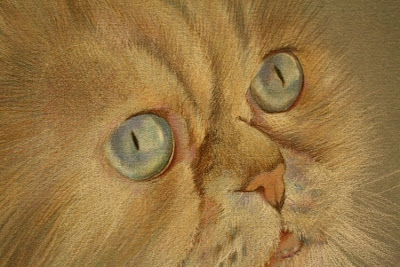 Here is one of the cats that I'm calling complete, pending approval.  I should have the second done this weekend, perhaps even most of the third if I ignore housework, cooking and any other distractions!

I find coloured pencil difficult to replicate in true colours in either a scan or a photo.  The paper that this is on is bluer than show here but the fur colour is pretty much as I have drawn it.  This is the 'rogues' gallery' waiting to be completed. 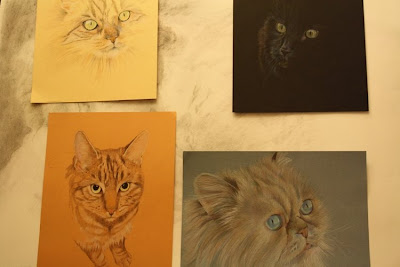 The contents of my head 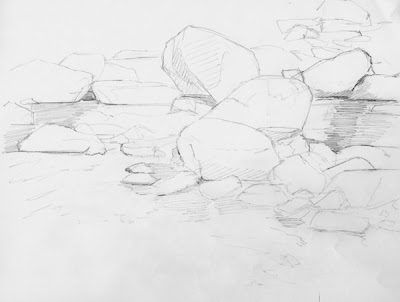 Manuels River
Sometimes I have so many ideas running around in my head I need to capture them before they disappear.  This is where sketches come in handy.  They're my quick upload tool for processing thoughts and visions into reality. 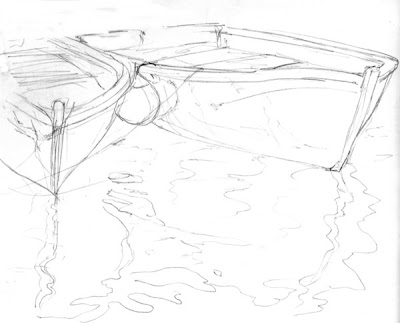 Bauline boats
These are a few sketches done over the last few days of ideas I have for paintings.  There are many more, but they all don't come at once and some hit the cutting room floor with a thud.  They may or may not be developed more into paintings or drawings, but there is an internal need - no, a demand - that they be recorded. 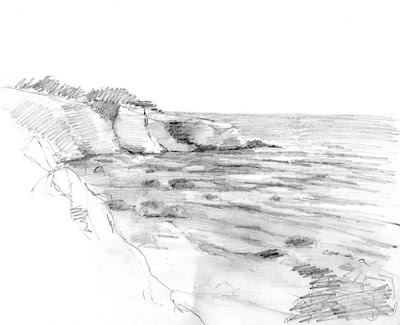 Gros Morne beach
But there is a certain relief in getting them on paper so they're not lost.  No sketch takes more than 10 or 15 minutes at most and is reduced to basic shapes, line drawings or values.  I don't know when or where I will sketch or have an idea for a piece come to me, so I always have a moleskine or similar small sketchbook in my bag and there are endless sketchbooks around the house.
Where do the contents of your head reside?
2 comments: 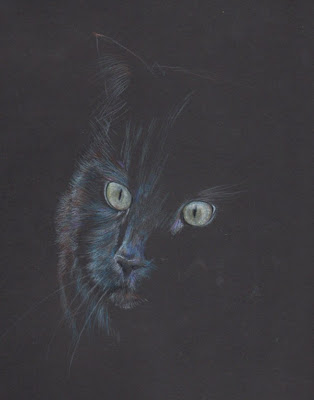 Here is the start of the 4th cat.

Drawing black cats or any black animal is a challenge and getting an image of it either on scanner or camera is even more challenging.  Finally, the scanner cooperated and a reasonably accurate image is here.

I'm not sure if I'm proceeding or if this will be a do-over yet.  I'll give it some more time and work and see if it comes together more.

And a little link that I came across for a free watercolour workshop online.  Creative Techs is hosting a workshop by Molly Murrah 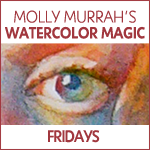 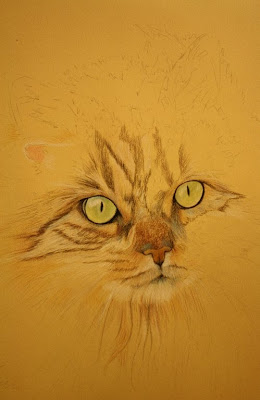 I'm pushing on with the cats with little updates, as I have a number of other projects both on the easel and in my head to move ahead.  My brain is almost into the fall and its only February!  Oh to have the luxury or more time.  Then again, it's good to have some pressure and time limits to produce as it spurs me on and I can be more productive then. 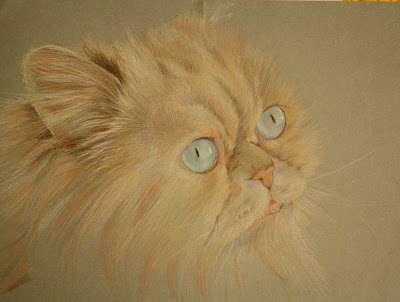 I like working on a number of pieces at the same time.  It keeps my interest level high as each piece is different and presents a new challenge.

These portraits are in various stages of completion with one that I haven't shown yet as I haven't done much to it yet beyond the eyes.  I hope to have the last two complete within the next couple of days, then concentrate on the other two. 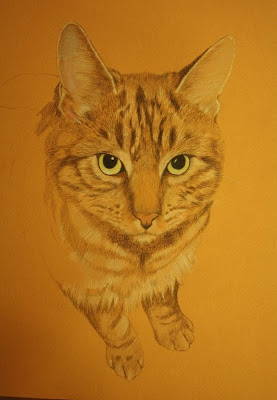 All are done in coloured pencil on the smooth side of mi-tientes paper.
6 comments: 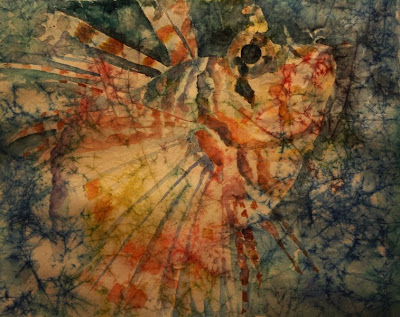 The lionfish is one of the most venomous fish on the ocean floor. Lionfish have venomous dorsal spines that are used purely for defense. When threatened, the fish often faces its attacker in an upside down posture which brings its spines to bear. However, a lionfish's sting is usually not fatal to humans. If a human is envenomed, that person will experience extreme pain, and possibly headaches, vomiting, and breathing difficulties.

I started another watercolour this weekend of a wild looking lion fish, one of Mike's images from the Weekend Drawing Event on WetCanvas.

Still using the masa paper and batik-like effect, I have been adding to it in bits and pieces while I work on some cats as well. The jumble of fin patterns is a bit confusing so I'm taking my time with this and referring a lot to the reference image.
5 comments: