Its time to choose a design for the 2011 Christmas card!   Which of these two images do you like best?  Click 'Like' on my Facebook page to comment on your favourite and to enter the draw to win an 8 x 10 reproduction of the one that is chosen.

You have until October 23rd to make your choice.  On the 24th, I'll choose a name randomly from those who've made their choice.  But you have to be a subscriber on my Facebook page to enter the draw! 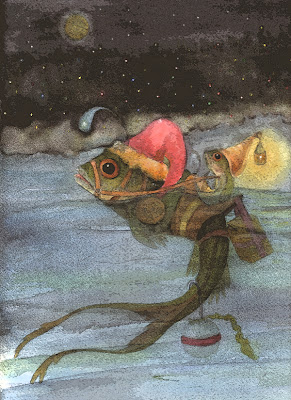 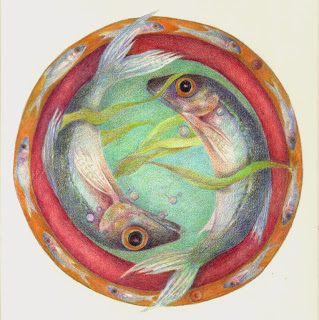 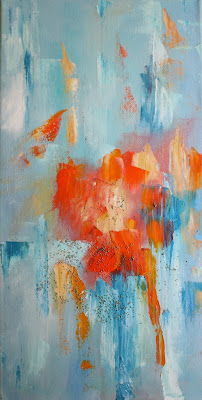 Rorschach VIII
Oil, stretched canvas    8" x 16"
I worked off and on today on a painting that I started yesterday of rocks and the sea.   At 8pm I wiped the painting.  It looked insipid and boring.  Very, very boring.

So left with a smeared, stained canvas, I played with a palette knife and the contents of the oil palette and this is the result. The Rorschach Test VIII.  A sprinkle of minute green/gold glass beads complete the piece and add more texture as they embed into the paint. 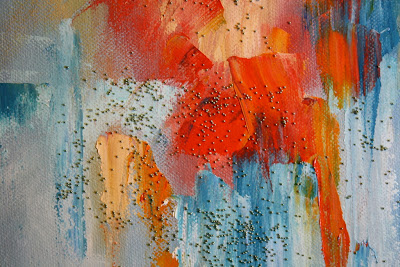 Test # VII seems the closest in form and colour of the ten inkblots that make up the test and the commonly found characteristics of the original inkblot have determined this:

People often express relief about card VIII, which lets them relax and respond effectively. Similar to card V, it represents a "change of pace"; however, the card introduces new elaboration difficulties, being complex and the first multi-colored card in the set. Therefore, people who find processing complex situations or emotional stimuli distressing or difficult may be uncomfortable with this card.

The Roschach test is a visual test used by some psychologists to determine personality characteristics and emotional functioning of subjects by reviewing their reactions to inkblots of varying shapes.  There is controversy around its use and In the 1959 edition of Mental Measurement Yearbook, Lee Cronbach (former President of the Psychometric Society and American Psychological Association) has been quoted as saying, "The test has repeatedly failed as a prediction of practical criteria. There is nothing in the literature to encourage reliance on Rorschach interpretations."

Despite the misgivings about the test, the reaction to this inkblot rather sum up my painting "a change of pace".  What do you see in it?
3 comments: