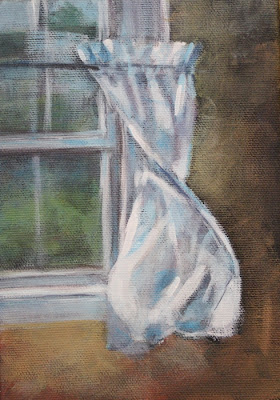 You know when it arrives.

The sun is brighter, the air is warmer.  You swear you think the grass is getting green again and there's a promise of daffodils and tulips poking their way through the soil.

You fling open every window in the house to release the winter worn air and replace it with the new season.

Then you start cleaning.
7 comments:

Young ducklings are such fun.  They’re curious and active and talkative.  Their bodies seem to grow before your eyes as they get taller and stronger.

Then one day during the wing testing exercises, the stretching, flapping and running across the yard and suddenly they become airborne.  The flight is usually short and they seem surprised that they can actually do this.   Most of the ducks test their flying ability in the first year and seem to lose interest after that, preferring to stick closer to the barn or field, which is likely a good thing with predators never far away.
1 comment: 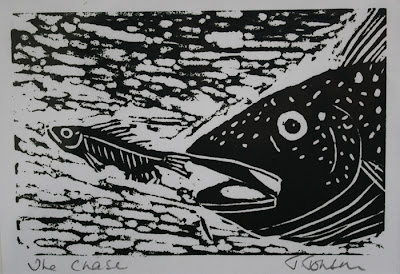 It's here! The Chase is the print for March in my Fishy Bits! project

The codfish is a classic Newfoundland image.  A codfish chasing a capelin still common especially in summer when the capelin are plentiful and the cod become too full to ever be tempted by a fisherman.

A few weeks each year recreational cod fishery is open and many people take to the water to get their quota of five fish daily.   Last year the fish they came back with were huge - too large to sacrifice to me for printing.   So I made my own!   You can purchase your very own cod/capelin chase hanging on your wall by visiting my website

These are printed using oil based ink on Japanese papers.  The piece here is printed on Masa paper.

I'm presenting the finished prints in various frame options over time to give you an idea of how they look framed.

This is a simple frame, 13" x 13" square with a 5" x 7" opening.  The print area is 4" x 6" and the larger opening allows space for the signature and title to show.   Sorry about the reflection of me ghosting the image, a hazard of photographing glass. 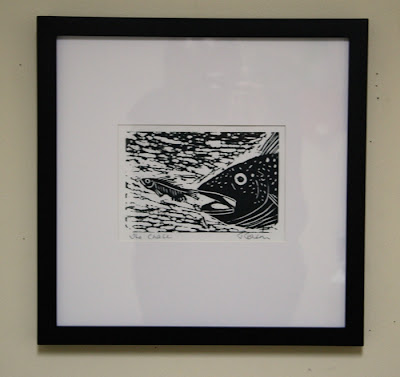 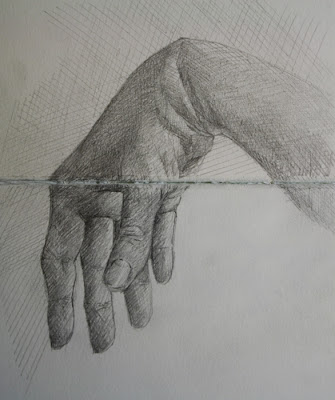 Which is your drawing hand?  Left or right?  Or are you ambidextrous?

My right hand is my drawing hand, my most everything hand.  The left goes along for the ride but doesn't have the dexterity for fine skills such as drawing.  Any drawing I've tried with my left look like a child's drawing - shaky, broken lines without the smooth strokes that the right hand can produce.

This sketch is of my right hand.  I was lying in bed, considering light and shapes and hands and took some shots of my right hand and wrist with my cell phone camera.  Drawing extremeties can be challenging for artists, but as with most everything, if its broken down into simple shapes then built up from there, the intricacies can be figured out.  The idea of a small series of hand drawings, perhaps in charcoal piques my interest. 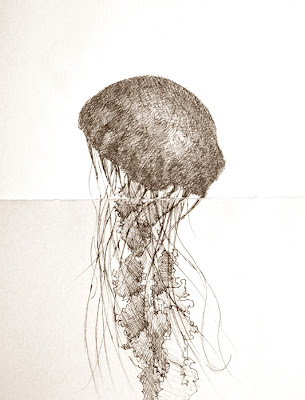 I'm fascinated with jellyfish and depicting their shape and movement in the water.  Light passes through them and creates amazing colours that you'd never think possible.  Blues, yellows, purples, reds...  However, this sketch is simple pen and ink, finely hatched.  The beauty of the jellyfish is that the shape is simple but complex too, allowing the pen to build up layers to create form without worrying about strokes out of place.

I love to see them floating in the water, long tentacles trailing into the dark water.  Their movement is so graceful, like a ballet in water. But have you ever seen a jellyfish like this one?  The comb jellyfish, a voracious feeder, eating its own weight in food daily. 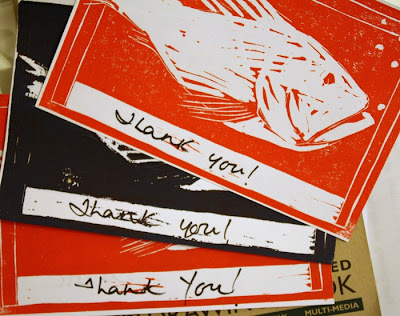 What does $25 buy? You could buy a decent lunch. A weeks' worth of fancy coffee at Starbucks. A really good bottle of wine. But what do you have to show for it besides a memory after its gone?

Your contribution of $25 to my Indiegogo campaign gets you an original relief print from the January, February or March collections of Fishy Bits printed on Japanese paper. To keep. Forever. And a lovely hand printed thank you card from me.

Your $25 invests in local art, future printmaking and knowledge sharing. In this age of instant everything, artists who invest time to learn traditional techniques and share their inspiration through the creation of quality art are a dying  breed and need your support.

Of course if you would like to contribute more than $25, it would be very welcome and the investment return is more substantial. And if you'd like to contribute less, that's possible too. If you have no spare money at all and could only share this post or campaign link, you'll have good karma always.

I'd love to share my art with you and make you the proud owner of one of Newfoundland and Labrador's cold water marine fish. Find out how your contribution can help make it possible by clicking on the campaign information below.

On March 15th, a new Fishy Bits print will be released and available from my website. I can't wait to share it with you.
No comments:

Ages ago I bought a round gallery canvas.  I don’t know what possessed me to as I had no idea of what I’d paint on it.  Until today.

I was thinking of fish again and the sketch of what I wanted appeared under my pencil.  its good to see something evolve from concept to finished piece.  Now to work on enlarging and transferring the drawing. The painting may not start til this weekend simply due to lack of time.

I keep looking at the sketch and wondering if I should give it a turn and if it would look better a quarter turn to the left, like this.  Which do you prefer?

These are frequent visitors to the bird feeder and are seen daily scrambling head downwards on tree trunks.  They are tiny birds compared to the others that arrive at the seed diner and never stay for long darting back to the safety of a tree or to the woods in case a hawk appears.

Originally called Le Torchepot du Canada, the Red-breasted Nuthatch is familiar to most North American bird watchers. Its present name in French is La Sittelle à poitrine rousse, a literal translation of its standard English name. It has been locally called "upside-down bird" (Newfoundland and Labrador)

Started on newsprint with charcoal, here's the original sketch then I added soft pastels. 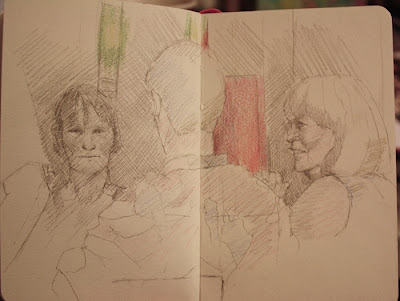 In St. John's, there's a famous street in the downtown core called George Street.  Its home to a pedestrian only  two blocks of bars, pubs, restaurants – and nothing else. Its the entertainment centre of amusement, alcohol, music, dancing, and crime - not in any particular order.

Its rare that I go to George Street, even though all ages tend to populate it, however, it is predominantly a younger group.  When people visit from other places, they want to see George Street at night in all its glory and its then that I venture downtown as tour guide.

And of course when there I tend to people watch and sometimes try to sketch.  This is the result of me tucked into a corner trying to be unobtrusive and a woman watching me watching her. She never said anything or approached me and I tried my best to avoid her gaze and blend into the background.
4 comments: 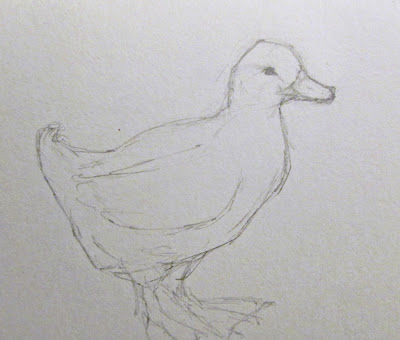 There are only two ducks left in the barn now.  B.D. and Lucky.

B.D. is a Muscovy duck and my very favourite boy.  Appropriately named  Big Duck (BD for short) as he's large, about goose size.  Muscovies don't quack but make a hissing sound and BD greets me like an old dog when he's out of the barn, rushing forward, crest up, hissing madly, tail wagging furiously. 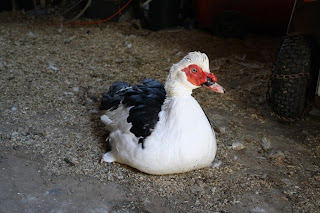 Lucky, the other duck, is a Pekin, the classic white duck of fairytales and nursery rhymes and who the sketch is based on.  Pekins are lovely ducks but very, very chatty.  They are constantly on the prowl, sifting through grass and talking to anything that will stand still long enough. 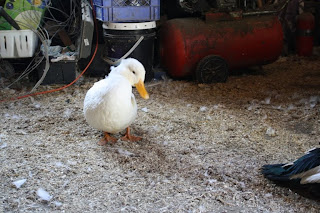 Lucky was so named as he survived a bad attack by a mink and then another by an owl. A tendon in Lucky's neck was damaged so his neck is crooked, aside from that he's just fine.   He and the two remaining ducks who survived the mink attack had been placed in a pen in the meadow til the owl visit, that killed his two companions. BD had recently lost his constant companion Buddy, so he and Lucky joined forces and are inseparable.  One would be lost without the other.

I think I would too.
6 comments: