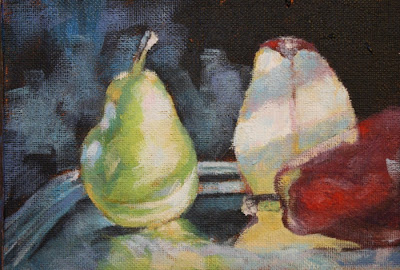 Pears are one of the most common subjects for painting and drawing.  Simple, but also complex to capture the values to produce that round shape.  I can't say that pears are my favourite thing to paint.  Their overuse makes them seem almost too common, however, revisiting simple shapes and interesting light is always a good warm up.

Here's a short video of the steps I took getting to the final piece.  I hate the red pear by the way it looks like a block of wood no matter what I do to it! :)

Cecelia sat by the surf, contemplating yet another herring.  Yes, fish was good for the waistline, but her need for something more comforting was ever present.  With one more look at the sea, she took to wing, heading for the nearest McDonald's parking lot to barter with the crows for left over french fries.

Yes, another small painting. I’m  on a bird track but I do have other paintings in the wings, large pieces that will start to take shape over the next few days.

I do love birds of all kinds but haven’t painted many of them and not a seagull, well herring gull in this case.  I find seagulls fascinating and living on the sea there are always hundreds of them around and they always seem to hang out at fast food restaurants.  Easy pickings I presume.  They are huge birds with bad tempers and a love for a fight with most any other bird that crosses their path.  I recall a particular scary encounter with gulls at Paignton Zoo years ago at an outdoor restaurant.

Despite that, I still think they’re beautiful and deserve a large painting of their own soon.
5 comments:

I can’t seem to settle into a major painting since before Christmas and keep producing studies or small paintings.  I have ideas for larger pieces in my head and filling sketchbooks but they don’t seem to translate onto paper or canvas.  I must buckle down and just produce and not let myself get side tracked.

This little house sparrow was one of the side tracks.   5” x 7” on stretched canvas in acrylics.
And some interesting facts about house sparrows:

1. In 1883, House Sparrows were legally protected in Texas. There was a law that disallowed the killing of any sparrow back then.
2. The House Sparrow first came to North America in 1851, when it was introduced to Brooklyn, New York. From there, the House Sparrow population quickly spread to the Rocky Mountains and on to the West Coast, mainly due to introductions in San Francisco, California and Salt Lake City, Utah.
3. Incubation of eggs takes just 11 days, and two weeks later the young will leave the nest.
4. Most pairs will try and raise at least two and often three broods a year.
5. Their adaptability can be gauged by the fact that they have been found living and breeding 2000ft underground in a coalmine; others have been recorded living their whole lives inside warehouses
6 comments: