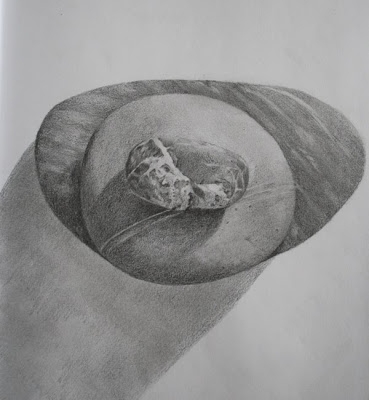 I'll call this study complete and consider the final composition for a larger piece.  I bought some large sheets of coloured mi-tientes paper today as stock was low.  Finding alternate coloured papers locally is difficult if not impossible, so if I run out, mi-tientes is my fall back paper until I can reorder online.

I need to reorganize the paper storage for my studio.  Right now its all sitting on top of a large shelving unit.  While that's ok for keeping it flat, it makes it more difficult when it comes time to actually find papers, so I end up hauling out everything to find just one piece.  More storage space is the answer and I do have my eye on expansion of my studio or at least expansion of some storage areas in the room adjacent to the studio.

Where my studio is located is on the ground level floor of the house, well partially ground level.  At least the windows to the studio are at ground level, the walls beneath the windows are subterranean and a direct entry 3 or 4 steps down from ground level.   Beside the studio there is a large areas where laundry is located, then a utility room, a cold room for food storage and a half bathroom.  By taking over the utility room, it gives me a whole new area to isolate storage or to provide classroom space.

I'll just have to slowly take over the space so others don't complain too much...
5 comments: 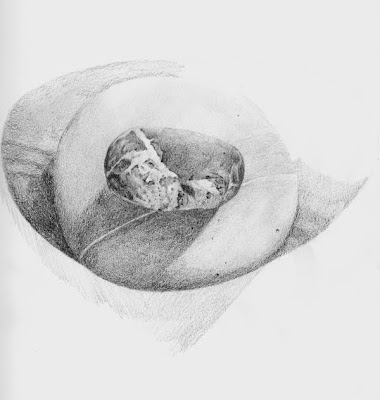 Newfoundland is full of rocks.  It *is* one big rock sitting in the Atlantic Ocean.  So its not surprising that I have an affinity for rocks, stones and pebbles of all kinds.

Last night I played around with a bucket full of rocks, creating little towers, mini Inukshuks and arranged and rearranged the shapes, sizes, colours and lighting until I found something that pleased me. 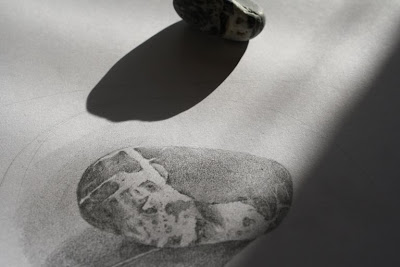 This is about 60% complete of a little study for a larger piece, perhaps in charcoal.  I like to get a feel for the work before I tackle something large.  I want to make sure that it will be exciting enough to inspire me to keep going until completion.

Often the simplest shapes are the most difficult to render in graphite.  Smooth stones with tiny pits and subtle gradation of colour always seem more challenging to draw well.  The lines of granite through the charcoal grey stone on top always fascinate me.  There are a couple of fine lines in the middle stone and the striped layers evident in the stone resting on the table.

I'll do a bit more on this study, then plan for a full size piece.  Maybe tomorrow I'll visit the beach and find some new models...
4 comments: 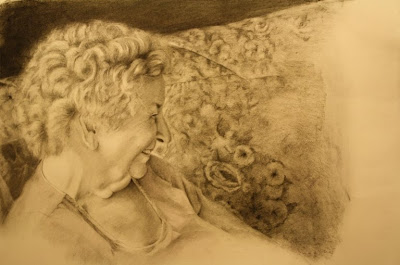 This is another small update on the portrait of my mother.

I'm working on the patterning on the sofa cover, trying not to make it too strong and distracting.  As it takes up two thirds of the surface, I still have a ways to go, so I'm doing other little pieces in between to stop the boredom setting in. 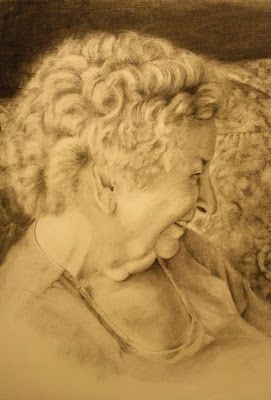 I have told you that this is done on Stonehenge, but as I noticed the watermark tonight, I realized that its Somerset.  That would explain why its shedding as I blend or brush it.  The charcoal works well on this but doesn't give as smooth a gradation of values as I would like for portraiture.  But too late to turn back now!
3 comments:


This site is featured on

Are you on the Arts Map yet?

The Arts Map is a listing of artists and their contact information and the work they produce from across the globe.   If you're travelling and want to check out some new artists or find a workshop, this may be the place to do it.

You can search the site by name, location and medium to find who is doing what and where.  Google Maps pinpoints the address, making the artist easy to locate. For those uneasy about placing their exact location, you don't have to, but of course the location won't be accurate on the map, just the town that you choose.

There is no charge to sign up and place your dot on the map.  I've created mine here and have the distinction - dubious or not - of being the most easterly in North America at the moment.


The Arts Map is about inclusion, not exclusion. Our goal is to provide a resource which will benefit the entire arts community.

We hope you will create a marker and put yourself, your work, or your organization "on the map."

It is a beta release, meaning that the program is still undergoing some tweaks and upgrades.You can read the FAQs and learn more about the program and decide if you want to join in.  The world of art is all about exposure and networking.  I see the Arts Map as another tool that helps this process.
8 comments: 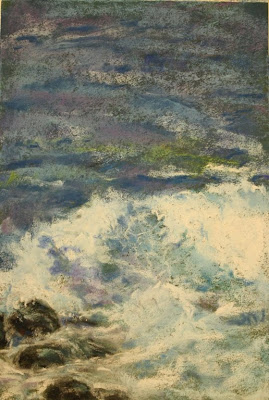 Surf
6 x 9  soft pastels
I invested in a new box of pastels today to augment what sticks and stubs I already had floating around in tubs and trays.  There is an immediacy about pastels that fills the gap between drawing and painting.  The feel of them as they deposit pigment on a rough surface is very satisfying, almost as much as the intensity of colours that can be created with them.

The drawback with creating pieces in pastel is the challenge of shipping them when someone buys one who isn't local.  Its rather more elaborate to ensure the pastel doesn't disappear from the surface or get smeared by the time it reaches its location.  However, so far, so good, with any shipments of pastels that I'd made.  As long as I sandwich it with a gap between and make sure the piece can't move it works well.

This piece is still water, but not another river view of Salmonier.  This is a view of the ocean breaking over the rocks at Flatrock.  The beach, if you could call it that, has a handful of rocks at its edge, breaking off from the flat rocks that give the area its name.  The movement of the water over the rocks is endlessly appealing to me.

This little study was more a trial run of the new pastels than a serious piece.  However, blue is the other attractant to me, so air whipped water turning turquoise always captures my attention.
13 comments: