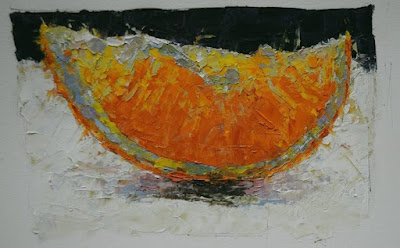 The teaching adage of  "See One. Do One. Teach One" applies to art workshops as well as any kind of learning.  So aside from explanation of practical technique, participants need to also see how paintings are constructed and then get some practice putting that information into paint application.  Whether they go on to teach one only the future can tell.

I do demonstrations of paintings and drawings at every workshop, some more finished than others, depending on how much time is available due to class size.  I used to be terrified standing up there with expectant eyes on me, waiting for perfection.  But now, I take it in stride, but of course, things don't always go to plan and perfection is rare. 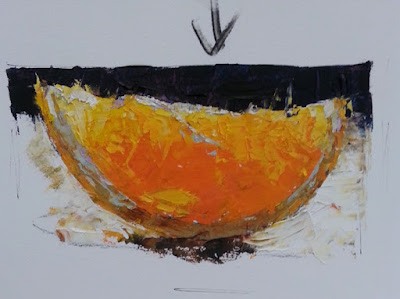 I'm teaching some workshops for Anna Templeton Centre in the city centre.  Its a lovely old (1849) building that used to be The Bank of British North America originally. Full of creaks and quirks befitting its age, it houses arts, crafts and design classes and is a wonderful space to work in. 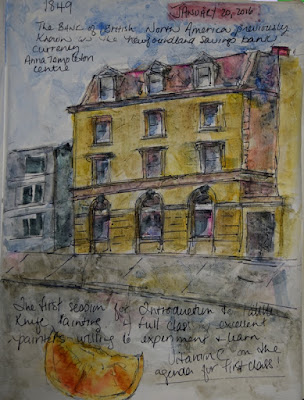 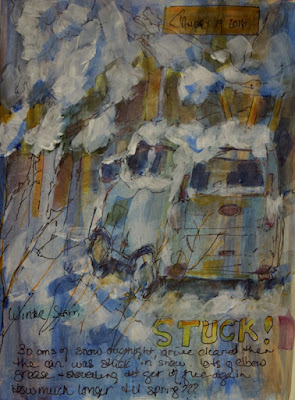 Art journalling is a current trend over the last couple of years, turning into big business in some aspects.  Its not fine art, but it explores creativity, colour exploration and drawing skills and encourages non-artists to dip a toe into the world of art.  I've never been a big one for journalling, but always enjoyed sketching.  On impulse I bought a new Moleskine notebook last weekend.  I had used these quite a lot a few years ago and loved the creamy, wax-like paper surface.  Perhaps I should have bought the sketchbook instead of the notebook, as the paper in the notebook is flimsier than the sketchbook and pen marks do show through to the other side, so I will be using one side only unless I decide to coat the pages with gesso if I want a double page.


I'm an abuser of sketchbooks and the Moleskine will be no different.  It just may get a bit more abuse in terms of media and additions to pages.  I don't view sketchbooks or journals as precious and "mistakes" should be embraced and shown as part of the process.  Not everything will be fit for consumption, but some will be catalysts for paintings and further exploration. 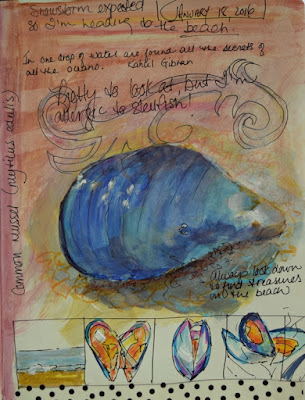 Journals are a way to escape, be creative, work out ideas and release inner thoughts.  An entry can take as little or as much time as you have available and become a colourful way of recording your view on the world.  You don't need to be an artist to keep an art journal, but any time spent creating can only be beneficial if you're heading down that creative road.

I'm going to try to do something in the journal each day until its filled, then see where I go from there.  I have several sketch books for general drawing but the journal will be a little different, a little more personal.

You've worked on a painting, joined all the social media avenues, have a blog, have a website, but can't seem to get eyes on your work.  How do you get your work to stand out in the giant sea of "art" that is now available online?  With a recession biting hard at our heels, at least in Canada, it becomes more of a challenge to seek attention from the right people and make sales. 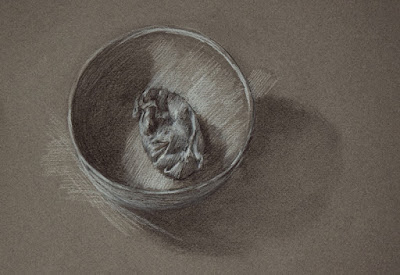 There is such a rush with some beginning artists to want to have a finished piece completed in such a short time.  Unfortunately, that usually isn't the case and frustration bubbles up when it doesn't look as anticipated.

Drawing consists of a number of stages that need to follow in order for the drawing to be successful.

1.  Decide on the size of your drawing so that it fits on the paper.


Running out of space on a page is a common problem for beginners.  By marking boundaries for the top,  bottom and sides of the space you want the drawing to reside in, eliminates this problem.

2.  Measure the size of the objects so they are in proportion.


Each subject has a specific height and width in the picture and establishing a basic unit of measurement provides the tool to ensure the the object is in proportion and ensures it is in proportion to other objects in the reference.


3.  Block in the basic geometric shapes that you see in the subject.


All objects, when brought down to a basic shape, are made up from geometric shapes:  circle, square, rectangle, triangle or cylinder.  Look closely at your subject and establish the broadest shapes. 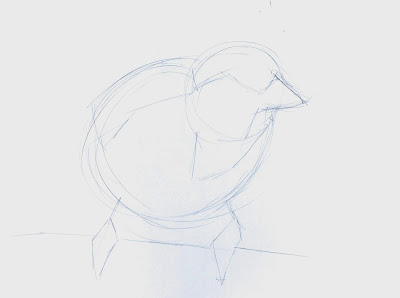 Once basic shapes are in place, its time to start refining those shapes to reflect the subject more accurately.  Use an H pencil and light pressure for all construction lines, so they can be easily erased or incorporated into the drawing.


Establish light, dark and mid values.  These provide the form to the subject.  Value mapping is drawing the shapes of values and provide a guide for adding values to your drawing. 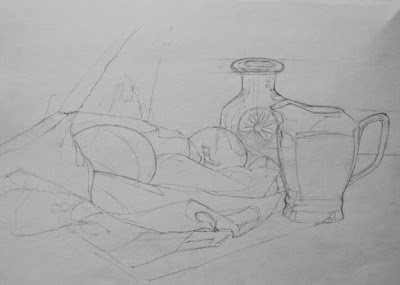 
Mid values are the most difficult for beginning artists to see.  These are the ranges between very dark and very light and can have several values between the two extremes.  Careful observation is crucial to see and understand the subtle value changes in a subject.


Jumping in with detail or highlights too soon in a drawing gives you a false sense that the piece is finished.  Sharp details of light and dark and highlights should be the very last thing you add to a drawing.  If added too soon, it's almost guaranteed that you will draw over them.  Again and again and again before the drawing is complete. 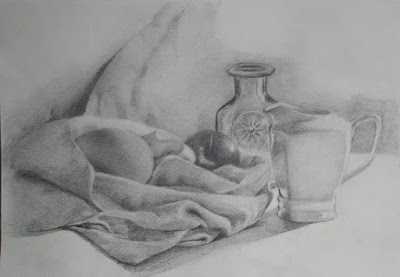 
A drawing takes as long as a drawing takes.  There is no prize for finishing quickly.  Build the drawing slowly, step by step.   80% of time should be spent looking at the subject, 20% drawing.  Observation is so important to achieve work you are happy with.


Along with observation, practice is the most valuable method of becoming proficient at drawing.  No amount of art materials, reading art instruction books, watching DVDs, admiring other drawings, or taking workshops will give you the skills that practice will.   Without practicing drawing skills, progress will be minimal and diminish over time.


Practice.  Every day. Even when you don't want to.

Where do cows come from? 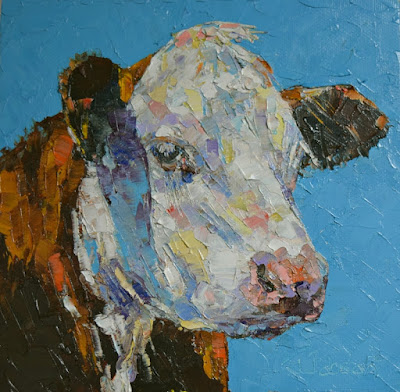 No, its not one of those "Mommy, where do babies come from" posts.  This is about the origins of the current domestic cow.  Now this is something you're either interested in knowing, or you've just hit the home button to get you out of this post.

Having lived on a dairy farm for a number of years and having the "maternity" field right next to the house on the farm, I was interested in cows, their behaviour and their personalities.  Yes, they do have personalities just like any other animal.  Some would have names, but a lot were just "cow" as there were so many of them.

Crasher, so named as she would pace up and down the hedgeline looking for an escape route.  Once spotting a weakness the the growth, she'd crash through then stand on the other side wondering how to get back into the field again.

Or Lofty, a full two hands taller than the other cows in the field, so always recognizable and acting somewhat superior because of her height.

Sally was the old matriarch.  Now barren, but still in with the rest of the herd, she'd try claiming every new calf as her own and was always in trouble for it with a new cow mother.

But back to the origins of cows.

From a herd of approximately 80 domesticated in southeast Turkey about 10,500 years ago, the current bovines have been domesticated from a now-extinct species of wild ox, known as aurochs, which roamed across Europe and Asia. Those cattle were then bred into the 1.4 billion cattle estimated by the UN to exist in mid-2011.


The original wild oxen (aurochs) were fierce and 1.5 or 2 times larger than the current domestic cow.  Rumour was that a hunter or traveller would sooner face anything but a wild cow.

There, you now have your "did you know?" coffee break conversation for Monday morning.